South County is well represented in the soon-to-unfold San Diego Section football playoffs with eight teams qualifying in 11-man play and one additional team in the eight-man field.

Mar Vista, the runner-up team in the Metro-Pacific League, is seeded fifth in Division V while Eastlake (Division I), Hilltop (Division IV) and Castle Park (Division V) are all seeded eighth in their respective divisions.

Mater Dei Catholic, which also saw its record suffer because of early season strong scheduling, is playing its best football as the postseason dawns with a six-game winning streak and 281-0 shutout streak.

McClure had one 76-yard catch-and-carry while senior Surhaz Buncom had five catches for 86 yards and two touchdowns.

Senior Tre Edwards keyed the defense with nine tackles. McMillian and senior Kenyon Lepisi each had one sack while senior Anthony Lopez had one interception.

The Crusaders will host the winner of Friday’s first-round clash between sixth-seeded La Costa Canyon (6-4) and 11th-seeded Steele Canyon (2-8) in the quarterfinals.

On the season, Nankil has established himself as one of the section’s top quarterbacks with his accurate arm and scrambling ability. He will stay local by attending the University of San Diego.

Steele Canyon defeated the host Grossmont Foothillers, 31-10, last Friday to generagte some momentum into the playoffs after navigating through an eight-game losing streak while playing one of the section’s most demanding schedules.

Senior Major Givens set a new school career rushing record after rushing for 454 yards and three touchdowns on 31 carries in the game. He scored on runs of two, 70 and 79 yards as the Cougars amassed 575 rushing yards. 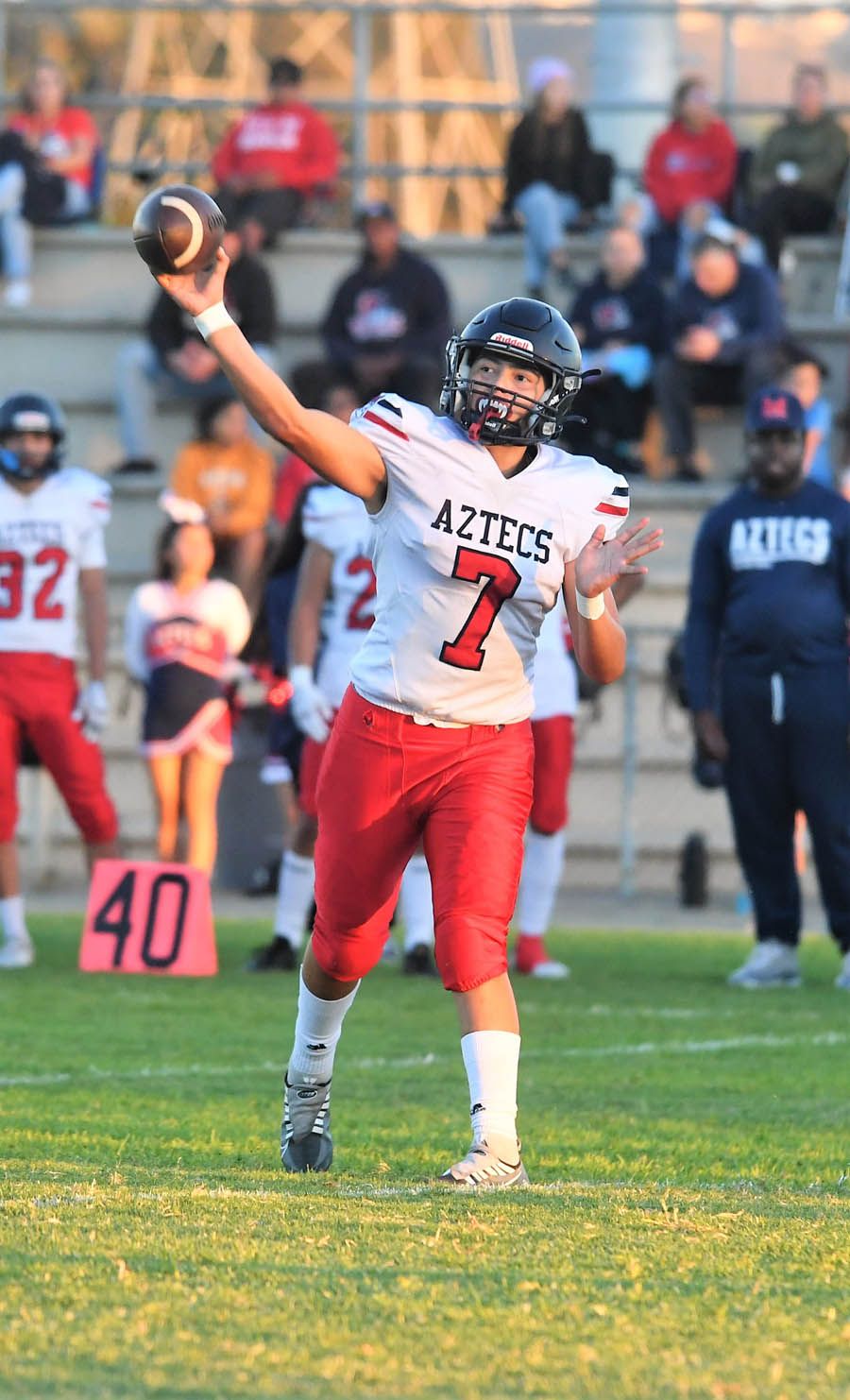 Montgomery will host either fifth-seeded Mission Bay (6-4) or 12th-seeded Westview (1-9) in its opening quarterfinal-round contest. The Aztecs wrapped up this year’s Metro-South Bay League title in dramatic fashion as senior Isaac Cervantes (10 carries, 39 yards) scored on a 10-yard rushing play with 35 seconds remaining in regulation play to snap a 7-7 deadlock with the host Hilltop Lancers.

Hilltop (2-1 in league, 5-5 overall) had opened scoring on a six-yard touchdown pass from senior Jorge Garcia to senior Angelo Zapata before the Aztecs (3-0 in league) tied the game on a five-yard rushing touchdown by senior Iganacio Mondragon (12 carries, 63 yards). Mondragon also passed for 107 yards in the game while junior Arath Leyva was credited with 2.5 sacks and a team-leading nine tackles.

The Lancers appeared to be driving for the potential game-winning score when a holding penalty forced threw them into a loss and forced them into a situation to settle for a field goal. But Hilltop missed the 47-yard attmept attempt and gave the ball back to the visitors, who proceeded to mount a lengthy time-consuming drive that resulted in the game-winning touchdown with time running out.

The game-winning drive lasted 5:32 and took 13 plays to complete.

“I knew we just had to score that touchdown,” said Cervantes, who enters the playoffs with 1,072 rushing yards and six touchdowns.

The league title is the third in four years for the Aztecs, who defeated Mission Bay by a score of 9-6 earlier in the season.

Despite the loss, the Lancers managed to solidify their grip on a playoff berth and will host ninth-seeded Francis Parker (4-6) in Friday’s opening round.

Parker closed out regular season play with a 21-0 non-league loss against La Jolla Country Day (7-3), which received the No. 2 seed among Division IV teams.

He enters the playoffs with 1,443 rushing yards and 19 touchdowns while also passing for 439 yards and four touchdowns. He has amassed 2,094 all-purpose yards in 10 games (an average of 209.4 yards per game) by adding 85 yards on kick returns, 141 yards on punt returns, 158 yards on interception returns.

Williams won the Division V championship in 2019 as a freshman as Parker shaded Castle Park, 24-21, in the rain at Otay Ranch High School.

The Metro-South Bay League runners-up counter with senior Tyeron Washington, who complied 89 all-purpose yards in last Friday’s league championship setback, and a strong defense that held the Aztecs to minus-6 yards (and Cervantes to minus-3 yards) in the first half.

“It was a disappointing loss Friday night,” Hilltop coach Bryan Wagner said. “We we’re right there a few times to put the ball in the end zone, but we failed to make plays. Overall, the effort was great, and we showed we can compete. Moving forward, we have the confidence in what we can do and how to go about doing it on both sides of the ball.”

The Hilltop-Francis Parker winner draws a tough assignment in the next round at No. 1 seed Fallbrook (7-3).

Mar Vista out-dueled host San Ysidro, 38-14, last Friday to secure a home field playoff game in a bid to finish as league tri-champions with a Castle Park win at Chula Vista. But the host Spartans prevailed, 34-0, to lock up their first outright championship since 2003.

Senior Aleks Wojcik passed for 272 yards with two touchdowns and rushed 20 yards on three carries and scored once via the run while senior De’Andre Hendrick had five catches for 82 yards and two receiving touchdowns.

As a result, the Metro-Pacific League runner-up Mariners will host 12th-seeded Hoover (4-6) on Friday. The winner advances to face fourth-seeded Army-Navy Academy (9-1) in the ensuing quarterfinals.

Wojcik has passed for 2,322 yards and 27 touchdowns against 10 interceptions on season while also leading the team with 552 rushing yards and five touchdowns.

Last Friday’s game showcased San Ysidro’s new field as the Cougars had been forced to play on the road nearly the entire season. San Ysidro finished 3-7, 1-3 in league play, and missed the playoffs. Freshman A.J. Logan led the Cougars with one rushing touchdown and one receiving touchdown and 168 total yards in their final game of the 2022 season.

Castle Park will host ninth-seeded Southwest El Centro (1-9) on Friday, with the winner advancing to meet top-seeded Crawford (9-1) in the quarterfinals. 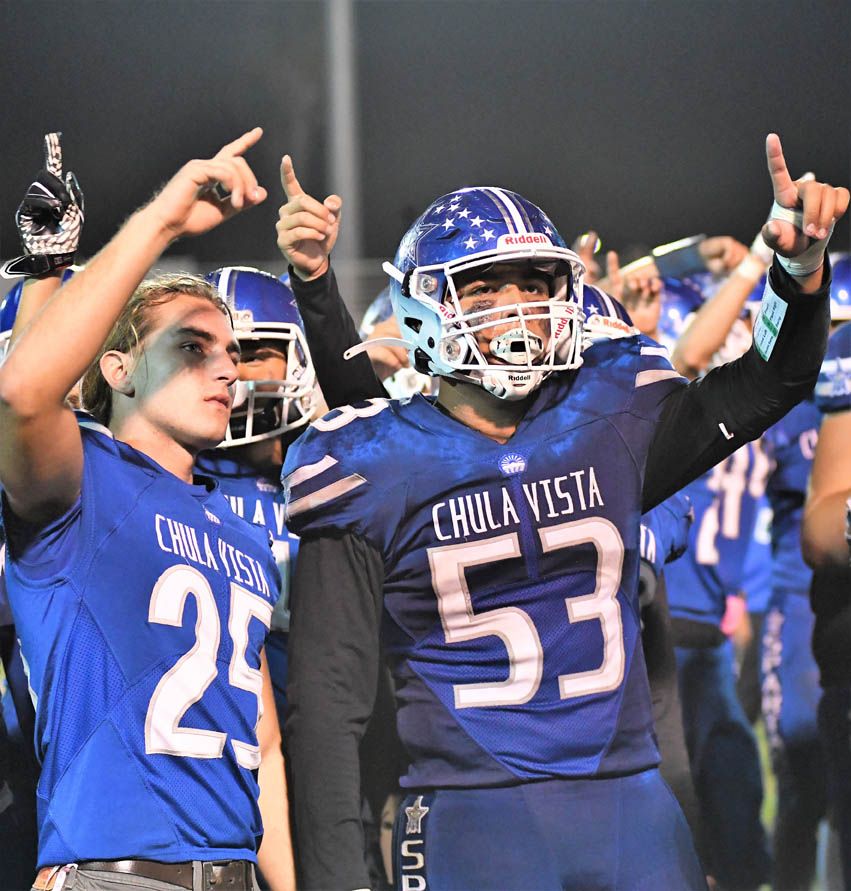 Metro-Pacific League champion Chula Vista will host a first-round game on Friday despite being the lower-seeded team. The Spartans, who are on a six-game winning streak with their first outright league championship since 2003, will host sixth-seeded Calexico (7-3), with the winner advancing to meet third-seeded Coronado (6-3) in the quarterfinals.

Senior Guillermo Arce led the Spartan defense with 15 tackles. The hosts stymied the visitors with four interceptions, including two by senior Gio Aguirre and one each by Pedroza and senior Luis Lopez. Senior Matthew Robertson had one sack while senior Octavio Ramirez had one fumble recovery. 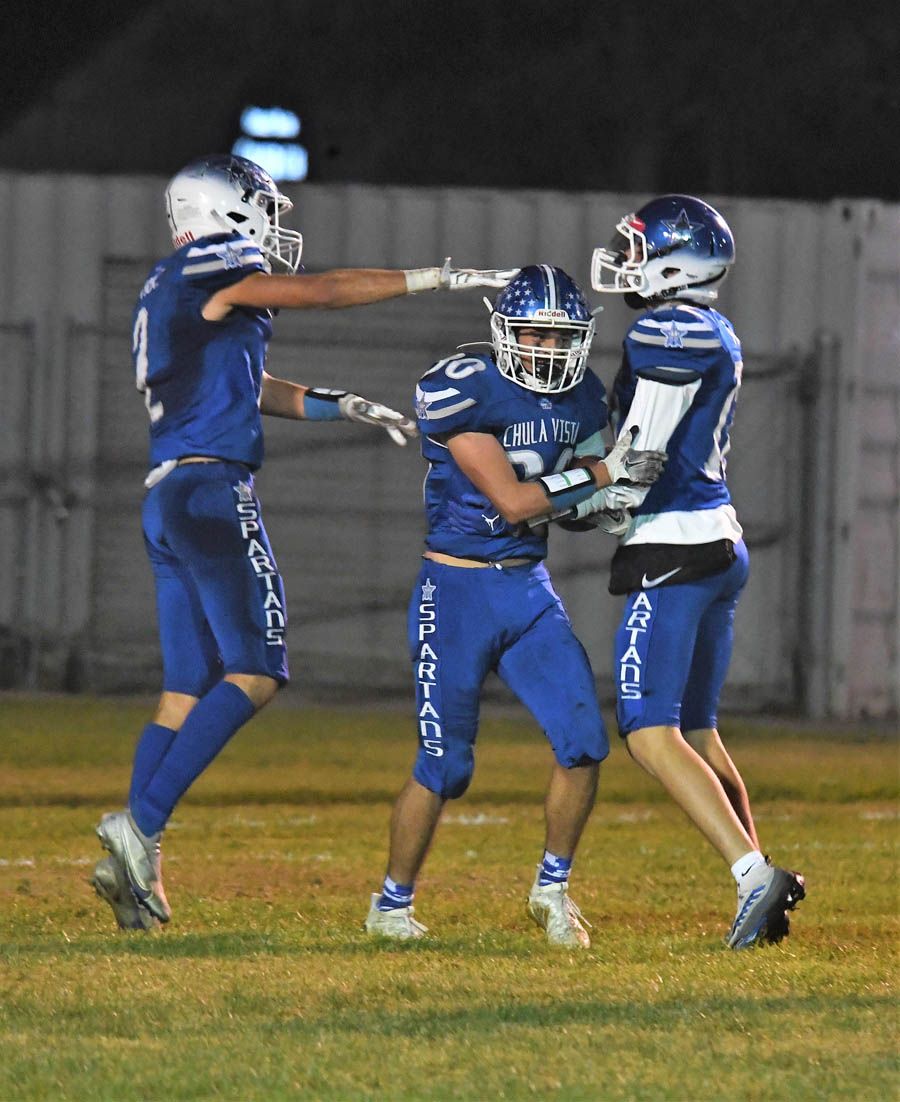 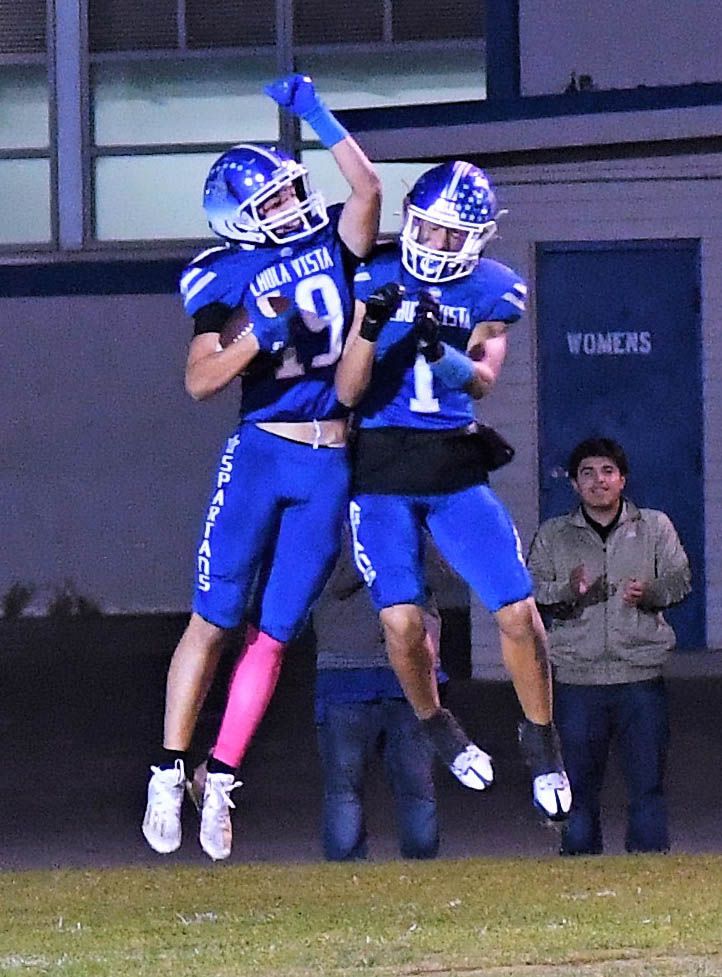 “We were very proud to bring a banner back to the Home of Champions,” CVHS head coach Howard Bannister III said. “Castle played a tough game, but that’s always expected from a Paco Silva-coached team. In the end, however, the night belonged to our Spartans… especially our 25 seniors who have worked so hard for this.”

Calexico is coming off a 42-16 non-league win at Vincent Memorial after finishing 1-3 in Imperial Valley League play. “They look like a tough, aggressive, well coached group, so we must have a great set of practices this week in preparation for, what should be, an excellent first-round game,” Bannister said.

Otay Ranch enters the playoffs riding a three-game losing streak. Bonita Vista failed to qualify for the Division III playoffs after being bumped out of the No. 12 spot by Patrick Henry based on head-to-head meeting (a 48-20 win by the host Patriots on Sept. 16).

BV senior Dante Herrero passed for 209 yards with one touchdown and one interception and rushed for 20 yards on six carries and two touchdowns to lead the Barons, who snapped a cumulative four-game losing streak to claim third place in the Metro-Mesa League standings.

Senior Dante Scott had five catches for 48 yards and one touchdown while senior Juan Manuel Gomez rushed for one touchdown, as did junior Caden Ada-Tannehill (10 carries, 39 yards). Sophomore Marcos Pena had seven catches for 106 yards.

Marquee match-up
Obviously, the most intriguing first-round match-up has ninth-seeded St. Augustine (3-7) at eighth-seeded Eastlake (3-7) on Friday. Both teams’ records are the result of tough scheduling and ill-timed injuries.

Eastlake suffered through a six-game losing streak to kick off the season before reeling off a three-game win steak while heading into the Metro-Mesa League championship game.

The Open Division semifinals on Nov. 11 will pit Carlsbad against Poway, the only remaining undefeated team in 11-man section play, and Madison at Lincoln.

It should be an exciting chase to the finish line.

Though no state regional playoff bracket yet exists for the 8-Man Division, six teams will battle for this year’s San Diego Section Commissioner’s Cup, emblematic of the section’s eight-man championship.

A total of 14 schools fielded eight-man teams this season across three leagues (Ocean, Manzanita and Surf).

The opening round is scheduled for Nov. 4-5, followed by the semifinals on Nov. 11.

The championship game is scheduled Nov. 19 at Escondido High School at 7:30 p.m.

The Ocean League was comprised of five teams this year. Victory Christian finished on top of the league standings with a 4-0 league record, followed by St. Joseph Academy at 3-1, Foothills Christian at 2-2, San Diego Jewish Academy at 1-3 and Ocean View Christian Academy at 0-4.

Senior Tookie Davis completed 21 of 26 passing attempts for 382 yards and four touchdowns. Senior Quinton Richardson completed his only pass of the game for a 30-yard touchdown as the Knights amassed 412 passing yards.

The hosts tacked on 156 rushing yards for 568 total offensive yards in the freewheeling game.

Davis tallied 445 total offensive yards on his own with a hand (or arm) in six of the team’s eight touchdowns. One of his four TD passes went for 75 yards. He finished the game with a 161.1 quarterback efficiency rating.

Overall, the teams combined for a behemoth 828 total offensive yards.

Foothills Christian, which will play the Rock Academy on Saturday at 6:30 p.m. at Francis Parker, totaled 139 rushing yards and 121 passing yards.

Senior Kevin Mayer had seven carries for 55 yards and one touchdown while sophomore Kameron Brown had six carries for 38 yards.

Clark and senior Jason Hardison each had one sack while Perrott blocked a punt.

Brown scored on a two-point conversion.

Davis turned in a phenomenal regular season with 1,505 passing yards and 23 touchdowns against just three picks while rushing for 475 yards and seven touchdowns.

Contreras has logged 107 tackles, including 10 for losses and seven sacks. Richardson has made six interceptions while Contreras has four picks to his credit.