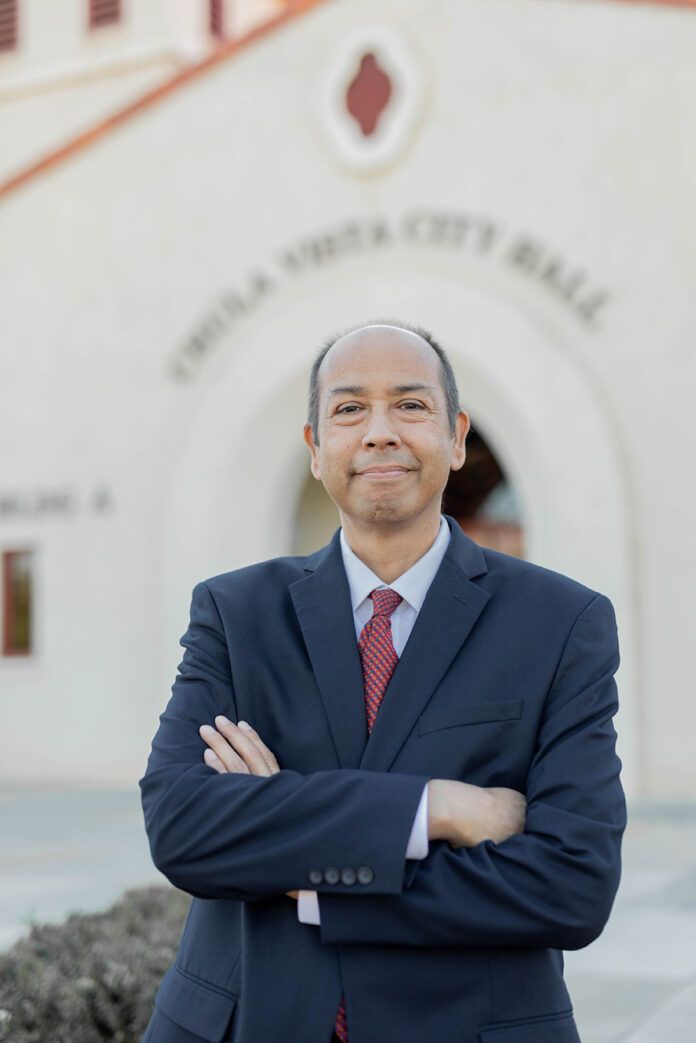 Simon Silva is running for the office of city attorney with the departure of City Attorney Glen Googins, whose term limit is ending. As Chula Vista’s deputy city attorney for the past 12 years, Silva has 28 years of experience in law, is a Marine Corps veteran, and served several years in law enforcement working his way through law school. Silva is 56-years-old and a registered Democrat. Silva said he believes that Chula Vista is an amazing city, with amazing people, and is moving into its next stages of growth with the development of the bayfront and the university innovation district.

“I want to help Chula Vista lead a success, and what I think that I bring to the office is a diverse background, significant and broad legal experience, a commitment to high ethics, community involvement, and justice and equity,” he said. “As I do now, I will provide independent, honest, straight-forward legal advice. I will advocate and protect the city of Chula Vista and my fellow Chula Vistans.”

Silva said his diverse background plays a vital role in who he is, how he sees things, what he cares about, and why he is passionate about public service. Along with his younger brother, he was raised by his single father who came to the U.S. under the Bracero Program in the 1950s. Primarily a farm worker with a third grade education, his father broke the farm worker cycle working as a janitor at Spreckels Sugar in Salinas. He said he grew up in poverty, lived in a two room home. Silva said his father encouraged them to do well in school, be respectful, and to care about the community. He said in his community, English was a commodity, so he learned to advocate at an early age, first helping his father work through unemployment when his work was seasonal.

“He lost his unemployment benefits, and we were not going to have money for that winter. So, I went with my dad to the unemployment office, and I translated and advocated for him, and we got our benefits back,” he said. “That was a huge deal. My dad was extremely proud that I did that. And it showed me the power of advocacy, standing up and helping working people. And I did the same for my neighbors. I did this growing up and that shaped who I was.”

Silva said this kept him humble, which he believes is important in terms of advising and having clients.

“Being humble helps you when you make mistakes,” he said. “To recognize them and learn to fix them. It also reminds me that I am part of a community. That is what I have done my entire career, both as a lawyer and before I became a lawyer.”

Silva was the first in the family to graduate from high school, then he went to UC Santa Barbara, and on to law school at USD. He met his wife in law school and has been married nearly 28 years with two daughters.

Silva joined the Marine Corps Reserves at 19 and served as a mortarman and infantry. He became a reserve sheriff’s deputy in Santa Barbara County in his junior year of college, working graveyards on patrol, worked Alta Vista foot patrol with the University of California police departments, and mountain patrol in the Los Padres National Forest.

“That describes who I am as a person, who I care about in the community in terms of understanding people’s plight in an economy where wages are not always as high as they should be, people struggling to stay in a house, rents are high, I understand those issues,” he said.

Silva said he started his law career as a prosecutor when he graduated from law school as a deputy attorney general in Los Angeles. He came to San Diego and was a deputy city attorney for the San Diego City Attorney’s Office, working in the criminal division, the domestic violence unit, specialized in elder abuse prosecution, then moved up to the civil division assigned as a police legal advisor for the San Diego Police Department.

Silva said working for the city of Chula Vista for 12 years now, his practice is extremely diverse.

“I get a broad range of things. I do labor matters, so I engage in the negotiations with the different bargaining units,” he said. “We try to be a good partner when we do so. We have reached agreements almost every time, only going past one time, settling quickly after that. I do employment law which deals with the different rights employees have. I work on affordable housing which includes inclusionary housing law, Surplus Land Act, housing accountability.”

Silva said when he drives in the community and sees projects like the Lofts on Landis, Duets on Volta, and Millenia, he sees tangible proof of projects he has worked collaboratively with staff.

Silva said as part of the process of moving from redevelopment agencies to successor agencies the state wanted $20 million from the City under Due Diligence Review.

“We used the administrative hearing process with the Department of Finance and whittled that $20 million to about $100,000,” he said. “I think at that time our reserve fund was around $15 million. That debt would have been huge had we not prevailed.”
Silva said his work includes working on contracts and advising various boards and commissions. He said he believes the boards and commissions are important as they are the voice of the community.

“I advise the Board of Ethics, where I helped create the Code of Ethics found in the Municipal Code. I advise the Civil Service Commission, the Mobilehome Rent Review Commission, the Sustainability Commission, Human Relations Commission, and others,” he said. “They are important because it is the public’s voice, and the public’s participation in providing input and guidance. I very much value that. I learn about the issues of which they are aware. It is not only advising on rules of procedures, but also being involved in the issues that they face.”

Silva said though he did not work on the contract between the City and Republic Services, and not privy to the clauses in the contract, if he were city attorney, he would own his mistakes and fix it.

“In regard to the clause, in future contracts, I would take it out,” he said. “It would not be a force majeure, and that it means that it does not void the contract. What we can do moving forward it is taking it out of that clause, make a separate clause that says in case of a strike, we can do several things. Number one, they would give notice when their contracts are expiring, when they start labor negotiations, and put terms in there if there should be an impasse or strike, how they would be held accountable in making sure services continue but being respectful of the individual employee’s right to strike. You must draft language that balances both interests.”