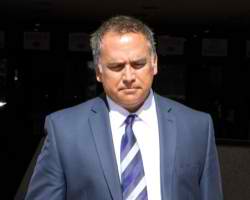 Sentencing for a Chula Vista police officer accused of physically injuring his girlfriend’s son was postponed until Nov. 6, causing frustration for the victim’s family waiting to see justice served.

Roman Granados, a 16-year veteran with the Chula Vista Police Department, pleaded guilty last April to a misdemeanor charge of cruelty to a child by inflicting injury and an infraction for disturbing the peace in an off-duty incident that occurred last year.

In the incident, Granados physically abused Matthew McCormick, who was watching his sister’s promotion ceremony at Chula Vista Hills Elementary School in June 2014.

McCormick’s’ father had previously said that Granados “punched and choked” his son who was 16 at the time.

“The victim has been through so much because of this man,” McCormick Sr. said. “He (Granados) has wrecked his (Matthew Jr.’s) life.”

Braner granted the postponement because in addition to a criminal protective order that’s in place, there is also a civil case for a restraining order. Braner agreed with the defense motion to move the criminal case to a different date so that the civil case can be heard first on Oct. 30.

The criminal protective order that’s in effect prevents Granados from contacting McCormick personally, electronically or by telephone. Granados also has to maintain a required distance from McCormick.

“The victim and his family have expressed concerns and suspicions that the defendant has not relinquished all his ammunition, so they want him to address that with the court,” Karkenny told the judge.

Standing outside the courthouse after the hearing, relatives said since the incident, the 18-year-old deals with post traumatic stress and wakes up in the middle of the night reliving the incident.

McCormick Sr. asked the judge to not postpone the sentencing because the case has already dragged on.

“There is no legal reason to continue this, other than counsel wants to continue it again and again,” he said. “We are six-months out from him pleading; we’re a year and a half out from when he actually chocked my son.”

Turner said Granados was placed on paid leave because the city, under the civil service code, only has paid leave.
Granados makes about $7,726 a month.

Turner said an administrative investigation by the department into the case has been completed and is now going through the civil service’s due process.

CVPD conducted its own criminal investigation into the case and forwarded their findings to the District Attorney’s Office.