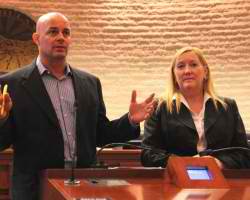 The city of Chula Vista held two community briefings recently about a potential change in ownership of the Olympic Training Center.

Deputy City Manager Kelley Bacon said at the meeting that the United States Olympic Committee contacted Chula Vista officials in May 2014 to determine if Chula Vista would be interested in taking full ownership of the property and to continue running it as an official training site.

Bacon said the city was interested in the idea but first needed to conduct a feasibility study to find out if the center at 2800 Olympic Parkway was financially viable for the city to take over.

“As a city we recognized at the beginning of this, we’re not in the business of operating Olympic training centers,” Bacon said. “And we’re not going to come out here and muck up something that’s pretty phenomenal.”

Judson explained how it would be important for the city to generate revenue from the Olympic Training Center while maintaining high quality facilities for the athletes.

“We looked at the types of revenue that can be generated from high performance training for the USOC and their affiliates, that was clearly the best economic partnership that we could have found out there,” he said.

Judson said potential revenue streaming ideas include bringing in soccer clubs to play at the center for a fee, opening the facilities for recreational use and special events.

The city of Chula Vista has entered into a memorandum of understanding with the United States Olympic Committee to set the framework for a finalized agreement but to also set an exclusive negotiation agreement between the committee and the city, Bacon said.

The 155-acre Olympic Training Center, which opened in 1995 is host to several sports such as archery, BMX biking, filed hockey and soccer.

“So far, I think it’s a great deal,” Liuag said. “Too bad the city didn’t hold firm with their master plan and we would have had commercial buildings right next to the Olympic Training Center and commercial real estate across the street. It would have worked much better with the new plan.”

Longtime resident Birte Wise said she wants to see the Olympic Training Center become open land for public use, not just used for the athletes or financial backers.

“What I’m concerned about is that it will be completely a closed entity because of all the financial interests that are coming to play,” she said. “When you see all the development going on with the housing coming up everywhere, you would want to have open space, open land.”

She said she understands the city is trying to generate revenue but said if the revenue falls short then the city is stuck with something that no one can benefit from.

Bacon anticipates a final agreement will be made by the end of the year.