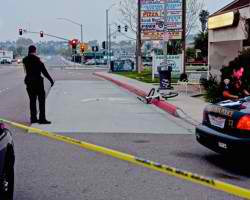 A judge set bail at $1 million Wednesday for a man charged with shooting two young men at a bus stop around 6:25 a.m. on March 19 in the 1600 block of Broadway in Chula Vista.

Two counts of pre-meditated attempted murder and two counts of mayhem were filed Wednesday against Andre Christopher Vega, 25, of Imperial Beach. He is also charged with assault with a deadly weapon on a third man who was shot at but the bullets missed him.

Vega did not know the men he shot at, said Deputy District Attorney Matthew Williams, and his motive is unknown.

Both men were shot each in the legs and were taken to a hospital.

Williams asked for bail of at least $750,000, but Chula Vista Superior Court Judge Patricia Garcia upped it to $1 million, saying “He does pose a danger.” A court appointed lawyer asked for “reasonable bail” without specifying an amount.

Vega is also charged with two counts of making a criminal threat and two counts of assault with a deadly weapon from an incident four hours earlier at an apartment complex in Chula Vista. Around 2 a.m. March 19, Vega pointed a gun at several people, took their cell phones, and then gave them back, said Williams.

Vega apparently did not know the people at the apartment complex and they were not injured. Vega was on probation for a misdemeanor offense at the time.

Vega pleaded not guilty to all counts. Williams said Vega could face life in prison if convicted. A preliminary hearing was set for April 6.