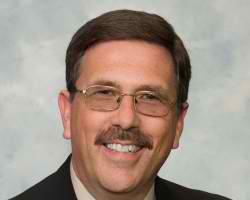 After serving the National School District in various capacities for 37 years, including the last seven as superintendent, Chris Oram said it is time to enjoy life with his family.

Oram, 59, notified district staff this month about his plans to retire, ending his tenure as superintendent where he led the school district to two Golden Bell awards, navigated the district through the recession and upgraded the district’s technology infrastructure.

But Oram said he could not take credit for all of the district’s success.

His announcement comes during a time when National School District teachers reached an impasse with contract negotiations and a school board is divided on issues.

Nonetheless, Oram said, he is leaving the district on solid ground for whomever succeeds him.

Last July Oram received a 13 percent pay raise, pushing his annual salary from $181,400 to $205,000. The pay increase was said to be his first in seven years and was given to him to keep his salary competitive with other superintendents in the county.

Oram’s rise to superintendent is what he says is a reflection of hard work and determination. He entered the school district in 1978 as a first grade bilingual teacher at Lincoln Acres, then eventually moved on to become a language arts specialist at John Otis Elementary School. Then after a few more positional changes he became a principal at

“I was very fortunate to spend all my years in this school district, working on behalf of the community,” he said. “You don’t get to this level without having a lot of fortunate opportunities but hard work does pay off.”

Although he took his job seriously, Oram said he missed being inside a classroom the most teaching kids.
Oram said his retirement is for good, and he isn’t having second thoughts.

“When you’ve decided to retire, there are mixed emotions.” “But it is time for someone else to take over the reigns.”
Oram said he’s discussed retirement with his wife for a few years now, but it finally became the “right time to retire.”

Oram said retirement plans include preparing for his daughter’s wedding, spending more time with his wife of 31 years and finding a part-time instructional job at a local college or university.