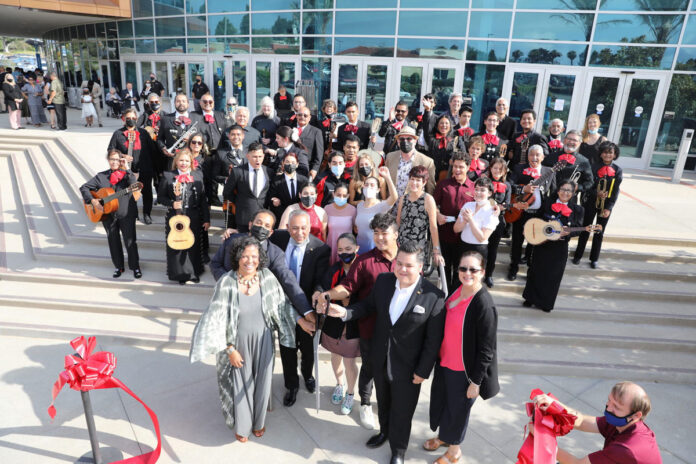 With the beginning of in-person classes at Southwestern College, a ribbon cutting was held on Aug. 18 for its highly anticipated Performing Arts Center, and a community welcome for Superintendent Mark Sanchez, named the college’s superintendent in February. The new facility comes with two theaters, dance studios, classrooms, tech shops, and state-of-the-art equipment. Arts, Communications and Social Sciences Dean Dr. Cynthia McGregor said this building was created with students in mind.

“We are so excited to give them this state of the art facilities so that they can rise and learn to be the best, most creative, expressive versions of themselves,” she said.

McGregor said the arts center has many wonderful features for students so that they can experience what it is like to perform in a professional theater, with a main stage with the capacity of 500, acoustic panels for musicians, a collapsible orchestra pit, a smaller theater with the capacity of 100 to 150 with the ability to perform in-the-round performances, two dance studios, and much more.

“Upstairs, the two beautiful dance studios have a view outside, the floors are beautiful with the right kind of bounce, again giving the students that professional grade learning environment that they deserve so that they can be their best. Injury free, big mirror spaces, a wonderful sound system, projector screens for backdrops so they can integrate these into their performances,” she said.

Professor of Theater Arts Ruff Yeager said he attended meetings for eight years for the building of the facility and its design. He facilitated the dance and theater performances at the ribbon cutting with the objective to add context tot the community as how the new performances would be used. Dancers performed in the dance studio and actors performed in the Black Box Studio Theater, with his students performing a scene from last year’s “Romeo and Juliet,” and a student singing a performance of its upcoming fall production of “Hand Under Hand.”

“I facilitated the dance and theater performances at the ribbon cutting,” he said. “My objective was to add context to the community of how these performance spaces would be used. We had students perform in the actual spaces. Dancers performed in the dance studio and actors performed in the Black Box Studio Theater. My students did a scene from “Romeo and Juliet” and then Jaden Guerrero sang a song from our upcoming production of “Hand Under Hand,” “ by San Diego Native Thelma Virata de Castro.

Yeager said that the feedback from administrators, other faculty members, and the community was extremely positive with many reaching out to him to tell him what a “joyful celebration” it was.

“Students now have state of the art facilities in which to learn their craft,” he said. “If you are a technical theater student, you have scene shops with state of the art equipment. Saws, drills, presses, and tools. You have state of the art lighting. The main stage has a surround sound system, not dissimilar to high end movie theaters. The dance studio is a performing space with all new sound equipment. They are going to be able to go out into other professional spaces and the ease that they will be able to move between this current space to another professional space is fantastic for their careers.”
Yeager said the theater arts program is moving forward with a much more intentional focus on programing.

“Our fall production is a piece of AAPI literature focusing on the Filipinx experience,” he said. “We intend to be more intentional about what we program in this building the community has provided for us, so that the programming reflects the community. Therefore, the community will be drawn into the space to see themselves reflected on stage. That is my hope. We are thankful for the Chula Vista community who provided this space, and we are dedicated to being good stewards of the building.”

In his third year at SWC, student Jaden Guerrero, 21, theater major, music minor, is the music director for the upcoming musical and sang “Hand Under Hand” for the audience. Having performed in the old Mayan Hall Theatre, and now the new one, he said the difference between the two is huge.

“It was a really small theater to be honest and the only rehearsal area was downstairs in a place we called the dungeon,” he said. “It was a little hall and a black box room, and a little classroom. When you go into the new theater, it looks like a big Broadway theater. It has its own black box theater with seating as well. It has multiple dance rooms upstairs, tons of space for classrooms, and rehearsal spaces.”

Jaden said this is going to be a place where theater is going to be taken seriously, and that the beautiful Performing Arts Center is a pinnacle of the college.

“It is really incredible,” he said. “On top of that, Southwestern has been incredible with diversity, knowing that we are in an area with many ethnicities, and they do a good job at putting on performances for everyone. We are setting up rehearsals for “Hand Under Hand” in September and the performances in October. It is about the trials and tribulations of the Filipinx community, including the domestic violence locally and the adversity of caregivers,  a job dominated by Asian-Americans, and how it affects their daily lives.”

McGregor said this is not only a magnificent step in giving students what they need, but also a way to reach out to the community to bring them in.