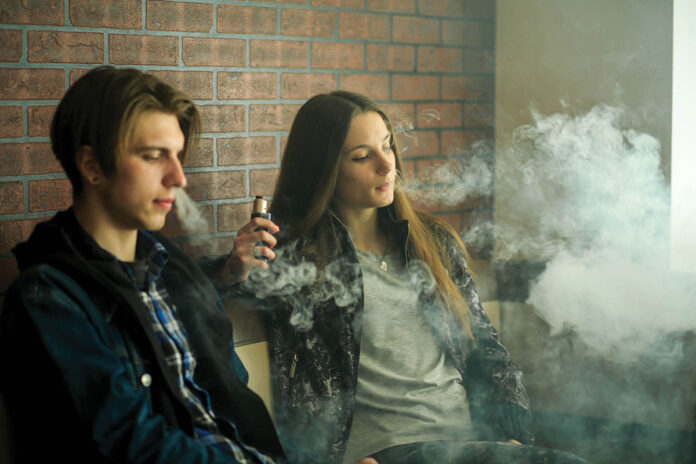 “The most important thing we can do as parents and community members is have conversations with our own children,” Green said, including listening to what kids have to say on the subject.

The tobacco use survey asked students why they would use a device that  delivers the same nicotine as 20 cigarettes, increases risk of lung damage and interferes with learning.

The same survey also reported that 49 percent of students who vape did not pay for their devices but had social access to the practice, which indicates use might rise again as many students return to campus.

“Before closing down for the pandemic, we (PTA leaders) heard about kids not wanting to take bathroom breaks because the air was so thick with vape use,” Green said.

There are a few challenges standing in the way of parents and teachers cracking down on use, she said.

Vaping devices can look like school supplies, chargers, highlighters and we might not recognize them as smoking devices… The other thing to think about is they’re not necessarily going to smell like tobacco. When you smell a strong strawberry odor, you don’t know if your child’s using some sort of body spray. Be aware of that really fruity, sugary smell,” Green said.

Another challenge, she said, is the tobacco industry appears to be effectively targeting kids.

“The flavors are deceptive and they’re hooking our kids. The challenge is that they don’t seem so bad— cherry or tooty fruity or whatever a unicorn smells like. But, this is a substance that is legal for people who are 21 and older, yet our kids are getting it. We need to make sure kids are not getting targeted by this predatory industry,” Green said.

Green, who previously worked as a Public Health Advocate and Communications Specialist with CASA Neighborhoods, a San Diego County non-profit agency that advocates for safe and healthy neighborhoods, said she recognizes kids don’t always want to be told what is right and wrong but “they do listen to the scientific info” available through public health campaigns.

“That carpool line is a great place to talk,” Green said, and can serve as a place to discuss things like local advertising.

The Tobacco Free Kids campaign, a non-profit organization that aims to reduce tobacco use in the United States estimates that $446.9 million was spent during 2020 on tobacco advertising in California alone.

“The big picture is that when businesses commercialize vaping, marijuana, tobacco, it becomes normalized. Kids feel like its common and for that matter, so do adults. When we normalize something, statistically use goes up. It is important to have policy in place to prevent use,” Green said.

Local parent organizations can help educate kids, Green said, from including informational websites in the newsletters they send out so parents have a starting point for information, to having open forums where parents can talk or strategize with each other, to calling in experts to speak on the topic at community meetings.

The reality, she said, is that while parents might be using electronic vaping products at home, “none of our federal agencies nor the American Cancer Society recognize any smoking device as an anti-smoking quitting device but we know that children watch their parents closely and pick up their habits,” even when parental use is tied to smoking cessation.

“We’ve spent 30 years in society changing the habits of people who smoke cigarettes to where it was far reduced, and then the tobacco industry decided to rebrand. Kids and adults are being lied to by an industry that stands to make a lot of money,” Green said.