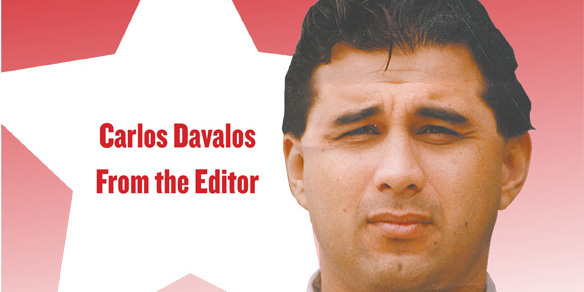 A note to the uninformed, forgetful, willfully misleading and the ignorant: Mexico does do things for us. Specifically they do cooperate with United States law enforcement.

The point of order comes in response to remarks Donald Trump made Wednesday during a roundtable meeting with California officials who oppose Californa’s SB 54, a law that limits interaction between federal immigration and local law enforcement departments.
Among the delegation making the trip to see and praise the president of the United States was San Diego County Supervisor Kristin Gaspar.

In relaying her reasons for opposing California’s law, Gaspar told the story of a man who had been killed by an “illegal immigrant” who now lives “openly and freely in a Tijuana motel.”

Gaspar, who wants to be North County’s next representative in Congress, went on to say “you can be across the border in a matter of minutes and be shielded by Mexico or you have the option of staying put” in San Diego and be shielded by California Gov. Jerry Brown.

I don’t know the particulars of the case to which Gaspar refers.

But I do know that Tijuana authorities were instrumental in helping San Diego law enforcement apprehend Armando Perez.

In 2010 Perez had brutally killed his estranged wife in a bathroom at San Diego City College. He fled to Tijuana and was ultimately arrested there more than a year later. Today he is serving a life sentence without parole thanks, in part, to assistance from Mexican law enforcement.

In 2011 there was the case of Jesus Arteaga Garcia and his extradition from Mexico City to Chula Vista. Arteaga Garcia was wanted for the 2009 slaying of his estranged wife Maribel Arteaga.

Without the aid of Mexican authorities chances are Arteage Garcia would not be serving a 15 years-to-life term in a U.S. prison.

And, lest they forget (I certainly haven’t), it was Mexican authorities who arrested and extradited Joaquín Guzmán Loera to the United States. Guzmán Loera, otherwise known as  “El Chapo,” the most powerful drug kingpin of his time, was taken into U.S. custody days before Trump was sworn in as this country’s president.

To state Mexico does nothing to help U.S. law enforcement is misleading or a lie. That sort of behavior is, unfortunately, common in this administration and it does nothing to foster continued cooperation or good will between agencies that work together in bringing closure and justice to suffering familes.