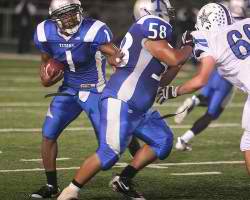 It’s still early in the season but one has to wonder if the Green Bay Packers are the best team in the NFC? Certainly, the Packers’ 38-28 non-conference win over the visiting Kansas City Chiefs on Monday, Sept. 28, has to lend credence to support that observation.

The Packers went up 14-0 in the first quarter but led 14-7 after the first of Jamaal Charles’ three rushing touchdowns for the Chiefs. Kansas City later fell behind, 31-7, before scoring two touchdowns in the fourth quarter to make it a 10-point game.

Smith said he felt his team came into Lambeau Field with a good game plan but failed due to a “fair share of lack of execution.”

“Across the board, there was a lack of execution,” he told the media in the post-game press conference. “We couldn’t get anything to spark us at all. The first quarter, we were out-played. There were not many positives in that first half.”

Smith has completed 62 of 98 passing attempts for 724 yards with four touchdowns and three interceptions to go with an 86.4 quarterback rating. The Chiefs next play the undefeated Cincinnati Bengals on Sunday in Ohio. Cincinnati is coming off a 28-24 AFC North Division win at Baltimore last Sunday.

Kansas City has dropped its last two games after opening the season with a win over the Houston Texans.

“We all have to look in the mirror and find something to right this,” Smith said. “There’s a lot of football left.”

Smith and Rodgers, both 11-year veterans, were selected in the 2005 NFL Draft. Rodgers has 236 career NFL touchdowns and was named MVP of Super Bowl XLV.

Smith has 126 career NFL touchdowns and has made one Super Bowl appearance (in 2013 with the 49ers).

Rodgers has completed 67 of 91 passing attempts for 771 yards with 10 touchdowns and no interceptions to go with a 135.4 quarterback rating. Key stat: He has only been sacked three times in three games. “If the guys keep blocking like that, we’ll be tough to beat,” Rodgers noted at the post-game press conference.

The Packers next play at San Francisco (1-2) on Sunday.

Jefferson made one tackle in the Arizona Cardinals’ 47-7 NFC West Division victory against the visiting San Francisco 49ers on Sunday, Sept. 27, as the Cardinals pushed their early season record to 3-0.

On the season, Jefferson has made 15 tackles, including 14 solo stops, to go with one pass deflection and interception return for a touchdown.

Fitzgerald had nine catches in the game for 134 yards.

Tyrann Mathieu led the Cards with two interceptions, one of which he returned for a touchdown. Justin Bethel had the other pick six while teammate Jerraud Powers also made one interception.

Russell Wilson threw one scoring pass and the host Seahawks also got a 105-yard kick return for a touchdown from Tyler Lockett and four field goals off the foot of Steven Hauschka to prevail for their first win of the season.

Wilson (20 of 30 for 235 yards) connected with Seattle newcomer Jimmy Graham (seven receptions, 83 yards) for one touchdown while Jermaine Kearse had six catches for 76 yards to brace the Seahawks in the receiving department.

Seattle accumulated 159 rushing yards in the game – 104 from Thomas Rawls. Marshawn Lynch was held to just 14 yards on five carries.

The Bears’ offense was meager: 63 passing yards and 98 rushing yards.

Jimmy Clausen started for injured Chicago quarterback Jay Cutler. Clausen completed nine of 17 passing attempts for 63 yards, did not throw a touchdown pass and was not intercepted. He was sacked twice and finished the game with a 61.6 quarterback rating.

Matt Foote led the Bears on the ground with 20 carries for 74 yards. Chicago defenders did sack Wilson four times in the game, including two each by Jarvis Jenkins and Pernell McPhee.

The Chargers, smarting from last Sunday’s 31-14 non-conference loss to the host Minnesota Vikings, will host the Cleveland Browns on Sunday, Oct. 4, in a match-up of 1-2 teams. Whether the Browns will start celebrated quarterback Johnny Manziel is unknown.

A dual threat quarterback in college, Manziel became the fifth player in NCAA history to pass for 3,000 yards and run for 1,000 yards in a season when he accomplished that feat in his freshman year at Texas A&M University. At the end of the 2012 season, he became the first freshman to win the Heisman Trophy, Manning Award and the Davey O’Brien National Quarterback Award in the same season. Manziel led Texas A&M to a 41–13 victory over Oklahoma in the 2013 Cotton Bowl Classic.

Manziel elected to forgo his junior season and enter the 2014 NFL Draft and was selected by Cleveland as the 22nd overall pick. He started two games his rookie season with the Browns – both losses.

Manziel started the Brown’s second game of this season against 2014 Heisman Trophy winner  Marcus Mariota and the Tennessee Titans. He completed eight of 15 passes for 172 yards and two touchdowns in a 28–14 win.

The Browns enter Sunday’s game after dropping a 27-20 game last Sunday to the visiting Oakland Raiders, who suddenly find themselves 2-1 on the young season. Are the Chargers the worst team in the AFC West? They will be out to prove that isn’t true by beating Cleveland on Sunday.

Chargers quarterback Philip Rivers threw for 246 yards and had a 34-yard touchdown pass to Keenan Allen but the game in Minnesota belonged to the Vikings and star running back Adrian Peterson, who rushed for 126 yards and two touchdowns.

But Rivers was sacked four times and suffered two turnovers. He fumbled once and was intercepted one. Chad Greenway scored on a 91-ayrd pick six to add insult to injury.

Allen had 12 catches for 133 yards and two touchdowns. Reserve Kellen Clemens threw one touchdown pass after replacing Rivers midway through the fourth quarter.

Rivers, hit hard on one play and noticeably in pain, left the game with the Chargers down by 24 points. He suggested it’s too early to throw in the towel on the season yet.

“We’re one and two and got 13 weeks (left),” Rivers said in a post-game press conference. “We fought to the end (in this game against the Vikings), we’ve got a long way to go, there’s a lot of football left.”