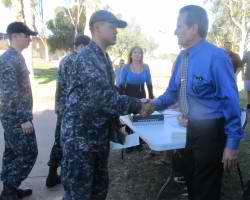 More than 450 low-income families in National City will have a Thanksgiving dinner, thanks to National City Mayor Ron Morrison’s eighth annual turkey giveaway.

Roman said despite having a job it is still hard to make ends meet so receiving a free turkey helps relieve some added holiday stress.

“It means a lot that the city cares enough to do this,” she said. “It definitely helps because I’m a single mom, so it makes things easier.”

Roman admits that if it weren’t for this event, her family probably wouldn’t be able to have a Thanksgiving meal.

Roman said she was going to go where the sales are to get the remaining items she needed to complete a Thanksgiving meal.

Ehrenpreis of the U.S. Navy said there is a misconception that service men and women can afford a nice Thanksgiving dinner.

“A lot of military people take it kind of for granted, some people think we are kind of high on a pedestal, which for some people it may be,” he said.

“But for myself coming in at a lower income family to take care of, I appreciate the offer. At the end of the day everyone has bills to pay and mouths to feed.”

Ehrenpreis said he has duty on Thanksgiving day but will enjoy the turkey he received once he gets home to his fiancé and baby.

Morrison said the military cannot be forgotten on Thanksgiving and giving back was the least he could do.

“We found out (in National City) we’ve got a lot of single moms and dads in the military, but guess what? We don’t pay them enough,” he said.

Wrigley’s Supermarket was one of many businesses to donate turkeys. The National City grocery store gave 50 turkeys for the event.

Morrison said the turkey giveaway has come a long way since it first started in 2006. Back then, he said, the event only had recipients from one school and gave out only 20 turkeys.