There’s just something about the roar of a crowd that gets the adrenaline pumping — something that’s been sorely missed at Southwestern College’s DeVore Stadium for two community college football seasons.

But the cheers — and jeers — were on full display Saturday as the Jaguars met the rival Grossmont College Griffins in front of a decidedly vocal gathering of fans. Though the stadium was less than half full, spectators aired out their lungs to make it seem like a sellout crowd.

Southwestern College fans got to cheer the loudest as the Jaguars pulled out a somewhat improbable 10-7 victory that left veteran Jags head coach Ed Carberry scratching his head afterward.

He wasn’t the only one in the stadium left wondering how Southwestern won despite trailing in nearly every offensive category during the game.

The Griffins out-gained the Jaguars in total offensive yards and led until the final 4:36 of the contest.

The Griffins (0-1) led 7-3 at halftime following a 50-yard field goal from 24-year-old freshman Asher Booth to put Southwestern on the scoreboard.

A 30-minute delay caused by failure of the stadium lights may have contributed somewhat to a momentum shift. The Jags certainly performed better under sophomore quarterback Stevie Orr (Davenport, Okla.) in the second half of the non-conference contest.

Orr connected with sophomore receiver Christian Jourdain (New Orleans, La.) on a 26-yard pass play that stood up as the game-winning touchdown.

Carberry said the play was called in from the field.

“I told coach I was open,” Jourdain said. “We had to make a big play because we needed to score. We needed to take the chance. When I saw the ball up in the air, I knew it was for me, I just needed to focus. When I caught it, it was time to celebrate.”

The Jags also benefited from some luck as Grossmont missed two field goals in the game, including a 45-yard attempt to tie game with less than a minute remaining in the contest. 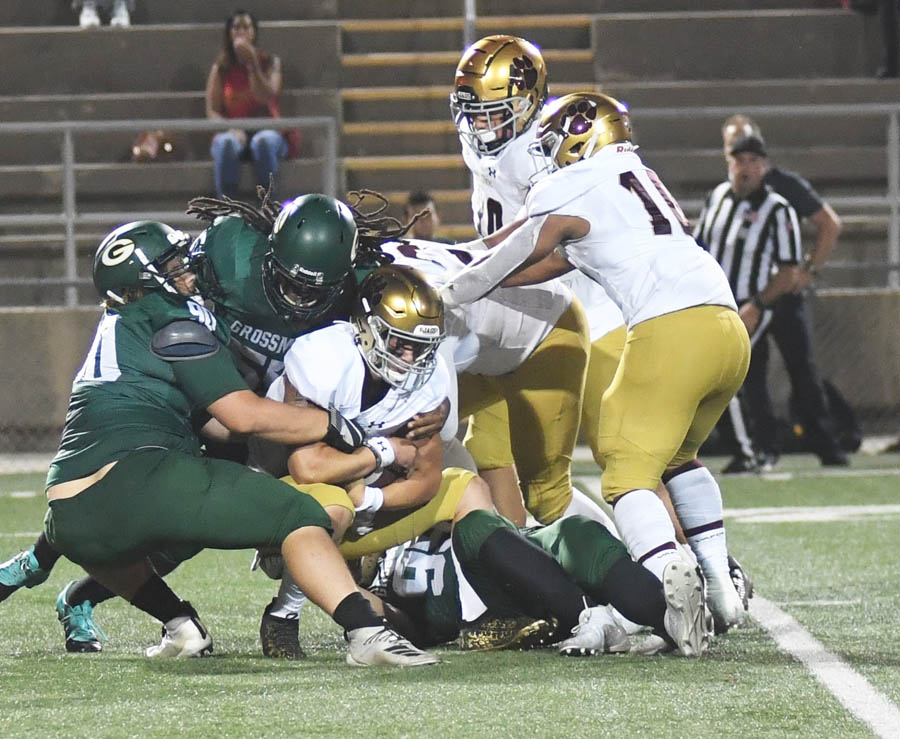 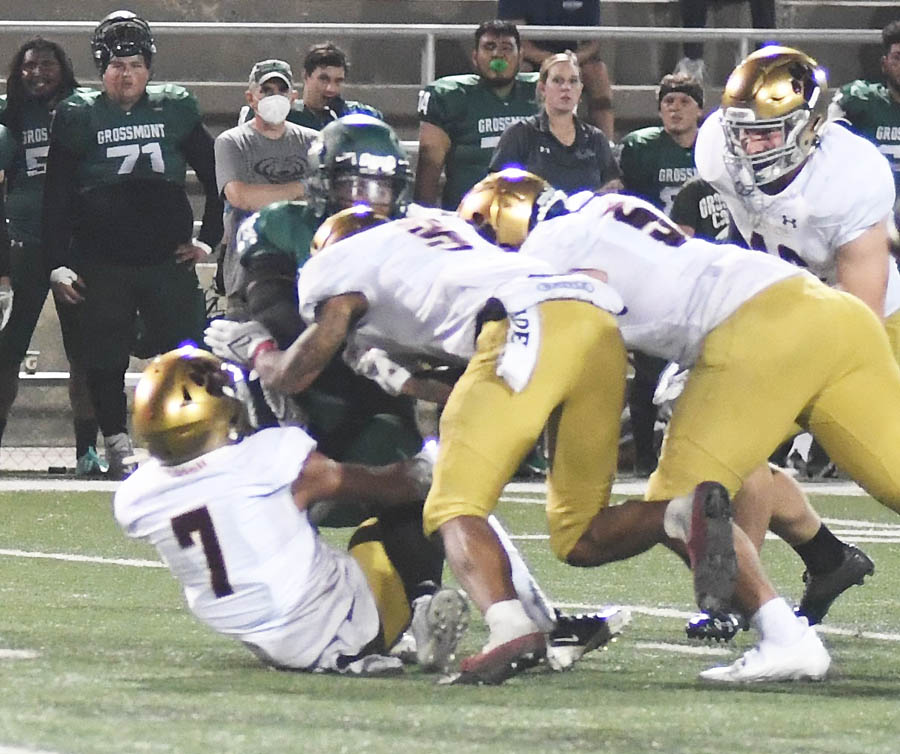 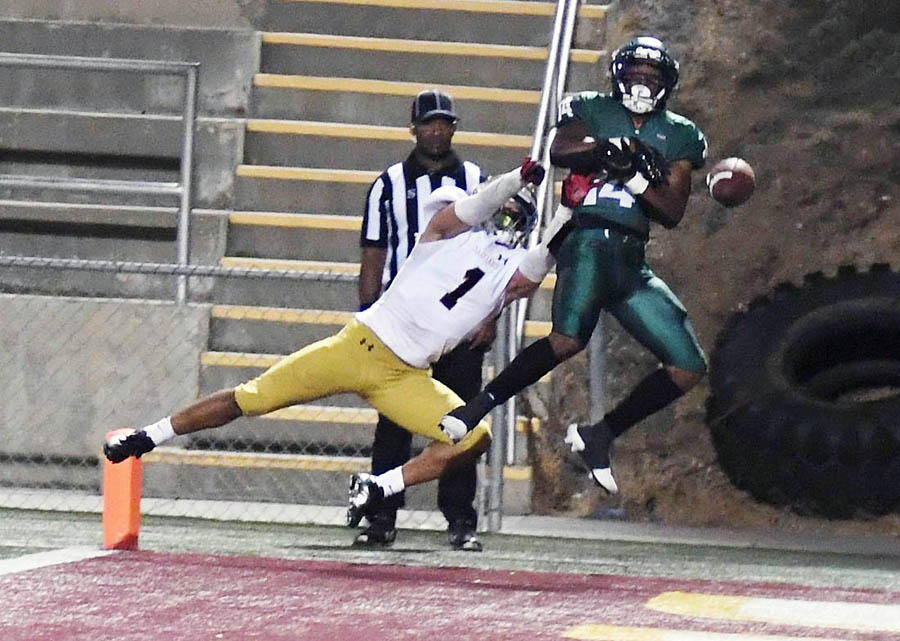 Andrew Kirk (Chandler, Ariz.) tacked on five tackles for the Jaguars while sophomore Arnold Escano (Olympian) had three tackles and a pass-break-up on the goal line to save a potential game-winning score by the Griffins in the waning stages of the game.

Grossmont head coach Michael Jordan was visibly disappointed by the loss, though he mixed in some optimism into his post-game comments.

In this case, he was likely left wondering how his team lost.

The 2019 Griffins finished just 1-9 — a huge motivational tool for this year’s rebuilding squad.

The teams have played each other every year with few exceptions since 1962.

The game was originally scheduled at Grossmont College, but a faulty scoreboard necessitated the venue switch to Southwestern College.

The Jaguars host College of the Canyons (2-0) in their official home opener this Saturday at 6 p.m. Canyons defeated Antelope Valley, 47-7, on Saturday.

Bell scored on a 23-yard run in the third quarter to erase a 10-0 halftime deficit.

The San Diego teams all finished 0-3 but competition against traditionally stronger programs was important, according to Jaguars head coach Jorge Perez.

“It’s a big win for us, any time you can beat the conference champion is a big win,” Perez said. 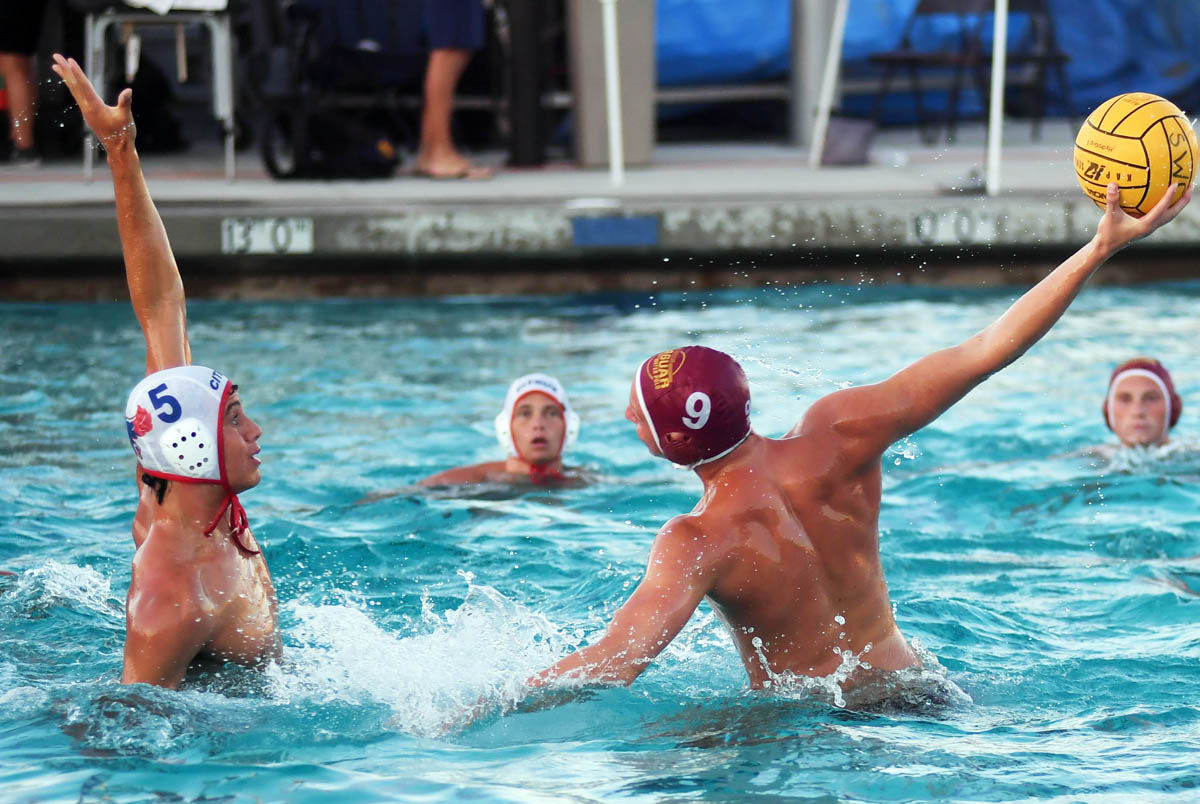 “It’s hard to get back in the water to get back into water polo shape,” Heber said. “But I’m totally happy to be back, elated. It feels unreal. We were all fish out of water for the last year and a half.”

“Physically, obviously we’re not there being out of the water so long,” Longworth added. “But you can’t deny it’s so good to be back, seeing new faces, old faces, coaches.”

Perez said his team should not get overconfident following the win over Mesa.

“It’s going to be a tough conference,” the SWC coach said. “Miramar is improved, Grossmont has a good team. This is only the first round.”

Grossmont defeated Crafton Hills, 27-7, in its conference opener on Sept. 1 and followed that up with a 23-15 non-conference win at Cypress.

Brock Kammerer, a USA Water Polo All-American at San Diego Shores, led the Griffins in the win over Crafton Hills with six goals and two assists while Garrett Durado chipped in with five goals and one assist.

“We have a solid group of guys but we’re extremely out of shape as far as polo goes,” said Grossmont head coach Ty Lackey, who was named to the California Community College Athletic Association Hall of Fame Class for 2021 for outstanding achievement as a player at both Grossmont College and later at UC San Diego.

“We’re struggling right now. We weren’t able to practice until just recently and it will take time to get where we want to be. We’ll likely have a slow start but we’ll have a good team by the end of the season.”