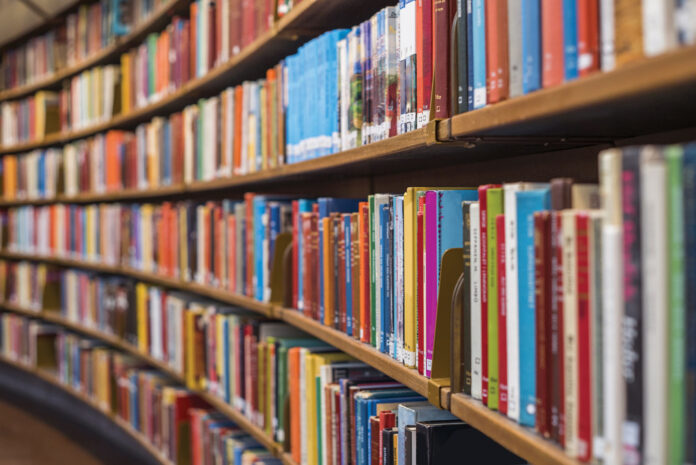 The first taxpayer-funded library, humbly seated in Peterborough, New Hampshire was open in 1833 to every resident, according to the American Library Association, neutral territory with plenty of seats at a community

table. About 18 decades since that first build, libraries across the nation have grown into community hubs with summer reading programs for young children, late-night hours for college students, shifts available for senior volunteers and recurring book clubs for all ages. They house meeting rooms both real and virtual where activists can organize for societal change and, come tax season, a stack of government forms appears on the counter, required and dreaded filing for every citizen regardless of race, gender or creed. There are accessible bathrooms for homeless residents, free menstrual products at some locations and few questions asked of the teen who appears there after school each day and stays until closing time.

Despite their stoic reputation, libraries are remarkably flexible in their programming, servants to their home community. Where one library might host English-language classes, another might hold naloxone training to reduce opioid overdoses. Prior to the pandemic, rural Alpiners enjoyed free-range chickens running through their library meeting space at a cheerful event planned for a community which borders on the backcountry of East county. About 20 miles west of Alpine, Skyline Hills librarians opened the doors to key stakeholders discussing reproductive justice in the wake of the Roe v. Wade overturn just a few months ago— Planned Parenthood representatives sat alongside California Attorney General Rob Bonta and State Assembly Woman Akilah Weber, an optimistic reminder that literacy and critical thinking are intellectual partners. National City’s municipal library recently launched a new online application in an effort to more effectively reach a community which was not just driven indoors to prevent the spread of COVID-19 but was also slammed with of the highest death rates in the county and has seen a slower return to in-person events than other parts of the region.

Skillfully, the same librarians who widen community access on a daily basis also consistently manage to shrink the world. Prior to the pandemic, San Diego county residents could access The Sydney Morning Herald a hemisphere away with a bit of online navigation. Two years in, fines have all but disappeared as a profitless waste of time and books requested from the nation’s first public library in Peterborough, N.H. through interlibrary loans can be picked up at self-serve kiosks in Bonsall or Boulevard as easily as a bag of groceries, worldly nourishment for the soul and mind.

I instinctively understood sacred space the first time I walked into the Goshen public library. I was supposed to take bus ‘X’ home each day from school but quickly learned I could slip from the line of third graders as we were ushered out to the bus circle, evade teachers on duty and walk down rural Goshen Turnpike to the historic library on Main street, free to read in peace until my mom finished work at five. Years later, after earning elective credits in my high school library then working for a welcome wage at my college library, I slipped out the front door of my apartment as an overwhelmed mom and walked to the La Mesa library with both kids in our worn double stroller. I smiled my way through story time, soaked in the warm sun and welcome scent of the library while I came up with a plan to make rent and keep from getting evicted. A decade afterward, I stood in front of that same library and took photos of a Wall of Moms with arms linked in solidarity at a protest. A bank had been burnt to the ground but the library remained standing, still sacred space three decades and 3,000 miles away from Goshen, New York.

I typically write about the intersection of government and social services: homelessness, non-profit organizations, fundraisers, community events. The library is a grand junction of all those topics. This monthly column will touch on the connection between libraries and community along with select event listings at local libraries.

• The National City library is currently offering free passes to some California state parks. Stop by the library in person or call (619) 470-5800 for more information. Visit CheckOutCAStateParks.com for a full list of participating parks.

• Chromebook computers and WiFi hotspots are available for check out to National City library patrons over the age of 18 with a valid library card, government-issued identification card and a signed technology agreement. Loteria online is open to players on the third Thursday of every month. Visit www.nationalcityca.gov/government/library for more information.

• Chula Vista City library has a bi-monthly Craftlab meetup where staff mixes science, technology and art for kids’ activities; the next session will be held on Aug. 16 from 4-5 p.m. at Otay Ranch branch library. Ballet Story time is happening the next day, Aug. 17 from 10-10:35 a.m. for children under age three and teens can attend Zine Night on Aug. 19 from 4:30-5:30 p.m., both at the Otay Ranch branch.

• Bilingual story time is held at the Chula Vista Civic Center every Monday and Thursday, weekly.

• Storytime is also held in English at the Otay Ranch branch library every Tuesday and Wednesday. Visit www.chulavistaca.gov/departments/library for detailed information.

• The Bonita-Sunnyside branch county library also offers story time to kids under five every Friday at 11 a.m.. The Merrie Ukes meets every Tuesday from 10 a.m.-12 p.m.. Beginners are welcome to have fun learning some songs and playing in a group setting. The Stitchers, an open group of knitting and crochet enthusiasts who donate their projects to charity, also meets Tuesdays, from 2:30-3:30 p.m.

• Silver Age Yoga meets every Thursday from 11am-12pm at the Bonita-Sunnyside library and the chess club, open to all ages and abilities, meets from 4-5 p.m. every Thursday.

Visit www.sdcl.org for information on these and other San Diego county branch library events happening in August.
You can email Jessica at: jessica@integritynews.us with comments and suggestions.