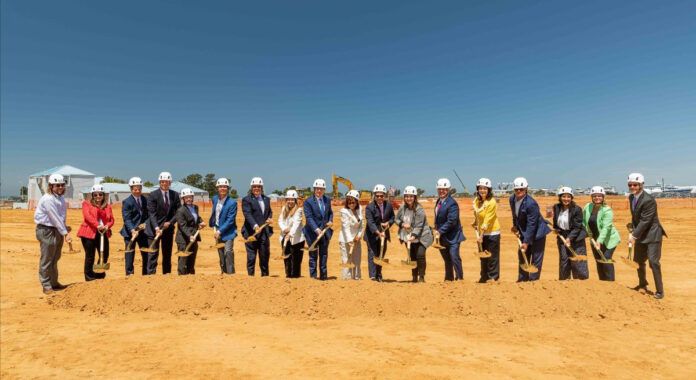 Chula Vista Mayor Mary Casillas Salas said the Chula Vista Bayfront is the “defining project” of a generation for the South Bay.

“We are finally realizing the fulfillment of all the tireless effort that hundreds if not thousands of people have invested in this project of the past few decades,” she stated in a press release. “I am beyond proud to be here to celebrate the start of construction on the Gaylord Pacific Resort and Convention Center.”

Gaylord Pacific includes a convention center with four ballrooms, three levels of meeting space and two outdoor meeting and event lawns, multiple restaurants, a sports bar, resort-style pool, and an assortment of recreational facilities. Ensuring connectivity to the wider bayfront, this project will have public amenities including pedestrian promenades, bicycle access, a variety of food and beverage offerings, game activities, a nature playground, and more.

“Gaylord Hotels is the large convention hotel brand of Marriott International. When constructed, this will be Gaylord Hotels’ first West Coast location. With its nationally recognized brand, the Gaylord Pacific Resort and Convention Center is expected to spur other development on the 535-acre Chula Vista Bayfront. Heavy equipment is positioned on site for the groundbreaking of the 1,600-room hotel and convention center,” it stated in a joint press release from the Port of San Diego and the City of Chula Vista. “It will have an enormous impact on the South Bay and the San Diego region and attract visitors from throughout the State of California and beyond. It will create thousands of jobs during construction alone. Once open, it will create sustained economic impact of half-a-billion dollars each year with 4,000 direct and indirect permanent jobs.”

The first phase of the development includes the resort hotel and convention center, a new public park, new roads, a parking structure, and supporting public infrastructure.

Chula Vista Council member and California Coastal Commissioner Steve Padilla said the people of the state, the San Diego region, and the city of Chula Vista can look forward to a “transformative project” providing major economic investment, job creation, and many public benefits, calling it a “historic day.”

Port of San Diego Chairman Dan Malcolm said this is the largest public-private partnership ever undertaken by the Port. “Its’ effects will be nothing short of transformative drawing visitors from throughout the state of California and beyond,” he said.

The hotel is currently projected to open in 2025.