The CIF-Metro Conference’s eight Sweetwater district teams faced off their first week of competition following the holiday break. Several have unwrapped snappy presents, including the Bonita Vista Barons with a spotless 4-0 record and the Hilltop Lancers and Eastlake Titans with likewise undefeated starts.

All eight district teams have logged at least one game so far.

There is a distinct dichotomy. All four Mesa League teams have winning records while all four South Bay League teams are below the 0.500 mark.

Eastlake’s offense has exploded on the court with a 22-0 win over Sweetwater, double-digit mercy-rule victory over Mar Vista and a 23-0 win over Castle Park.

“We have most of our returners from last year, plus a few newcomers,” sixth-year Titan coach Richard Haislip said. “The kids are motivated to win this year. They’ve been working hard. Some of the players have been here four years, They’ve put in the effort to make it happen.”

Money-man Cash Schreiber returns to lead Eastlake but only collected one assist in the Jan. 12 rout of Castle Park. That shows how much the rest of the Titan squad has grown. Eastlake has depth this season, and plenty of it.

Eastlake’s No. 1 line, the Money Line, consists of Nick Redmond, Adam Ibarra, Schreiber and Emilio Navarrette. The quartet combined to post 10 goals and four assists against the Trojans.

The team’s No. 2 line actually may have had a better evening in the scoring column.
Freshman Chris Rollbusch collected six goals and one assist to spearhead the Titans in the scoring column while Redmond bagged four goals and two assists. Ibarra and George Carver both logged four goals while Eric Morgan contributed two goals and two assists.
Navarrette compiled two goals and one assist while Altaire Nguyen scored once much to acclaim from the EHS bench.
|
CP goaltender Alfredo (Sammy) Gonzalez recorded between 30-40 saves in the game while Lady Titan Akemi Scott made two saves by comparison to record the shutout.

Otay Ranch 7, San Ysidro 1
The Cougars scored just seconds into the game but the Mustangs closed out scoring with the next seven goals to improve their record to 3-1. Luis Reyes got San Ysidro rolling until Mason Paulo evened things up for the Mustangs late in the opening period.

Otay Ranch scored three times in the second period and tacked on three more goals in the third period.

Otay Ranch coach Christian Welch said his team is looking to “build a strong foundation for years to come.”

Bonita Vista 12, Otay Ranch 6
The Barons rolled to a 4-0 start by doubling up the Mustangs in a game played on Jan. 11. Sophomore Jacob Hunter led the victors with four goals while sophomore Damian Nunes, junior Andrew Madrigal and freshman Matthew Metcalfe each tallied twice in the key Mesa League contest. 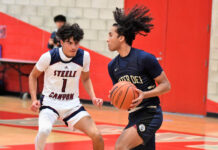