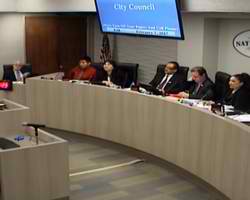 Although a city might be is deemed a sanctuary city, Jacobs said the designation does not prevent Immigration and Customs Enforcement officers from entering that specific city and searching for illegal immigrants.

“The term sanctuary city can be misleading and can give people a false sense of security,” she said.
Jacobs said a welcoming city is based on the Welcoming America initiative set by the Obama Administration. The initiative is more symbolic by encouraging cities to be welcoming to immigrants and refugees. Jacobs said she often encourages municipalities to adopt welcoming city initiatives for their residents because it is a good message to send to refugees and immigrants.

National City Councilwoman Mona Rios supported the welcoming city resolution and said despite what the mayor said federal funding would not have been withheld from the city because President Donald Trump has only threatened to hold funding for a sanctuary city designation.

Rios estimates that National City receives nearly $12 million in grants from the federal government which can only be used for special projects such as the police department conducting DUI check points. Rios said federal funding could not be used for day-to-day operations.

The two-term councilwoman said she would need to do more research on the impact sanctuary city’s have on communities but would not mind considering sanctuary status.

“If I felt that there was the support I would have no hesitation in moving a motion for a sanctuary city,” she said.
National City Police Chief Manuel Rodriguez said he met with Homeland Security Secretary John Kelly last week and Kelly had told him that the federal government does not have a definition to what a sanctuary city is.
Rodriguez said for most major crimes such as robbery or burglary the police department will use a criminal’s immigration status as a tool to hold that criminal accountable for their crime, but that immigration status will not matter for a minor offense or for witnesses and victims of crimes.

However, he said, the National City police department does not have specific policies when it comes to enforcing the law for a sanctuary or welcoming city.

“We continue to have a policy that focuses on crime,” he said.

The National City Police Department only has 86 officers on staff and does not have the resources to round up illegal immigrants for federal authorities, Rodriguez said.

In Chula Vista city officials are exploring both the sanctuary city and welcoming city designations for a possible vote.  In a recent city council meeting, Mayor Mary Casillas Salas asked the city attorney to work with the city manager and police department to research and come back with a report on sanctuary cities

Chula Vista Councilman Mike Diaz said he is not fond of giving Chula Vista sanctuary city status or calling it a welcoming city.

“The most important issue in discussing sanctuary cities is the safety of the public,” he said. “Does creating a sanctuary city protect the citizens of Chula Vista? It clearly does not.”

Diaz said he’s seen data that shows sanctuary cities do more damage than good for cities as it protects illegal immigrants with multiple felonies. He said there is not a clear-cut definition in what a sanctuary city is but to him it is one in where the local government does not refer or does not work with law enforcement in regards to illegal immigrant criminals.

Jacobs said there has been a study by the Center For American Progress that shows Sanctuary Cities throughout the country have proven to be safe for residents.

Diaz, a Republican who was elected in November to represent District 4  in Southwest Chula Vista said he also sees no point in becoming a welcoming city, as there is not much of a distinction with sanctuary status. Diaz said a welcoming city is just a term several cities are using as a defense in not losing federal funding.

The Chula Vista Police Department said they will do whatever the city council asks them to do.
Diaz said he is not convinced that a Sanctuary City is in the best interest for Chula Vista.

“In the United States about 47,000 citizens die from illegal aliens driving while intoxicated under alcohol and other kind of drugs. If you look at that there is a problem with people who are here illegally who are felons, creating crimes.
“If you can convince me that a sanctuary city is going to make our citizens safer, I’m all in it but there is no statistics that prove that.”

Diaz added that although he is against a sanctuary and welcoming city, that does not mean he is anti immigrant.
Other elected officials in the county have a different perspective.

During the presidential primaries, Encinitas’ Deputy Mayor Tony Kranz proposed making the city a welcoming city. The Democrat’s proposal passed with a 3-2 vote and currently serves as the model for cities throughout the county who are exploring using the welcoming city status.

Kranz said the welcoming city model has been welcomed in his community with success.

“Aside from the fact that it attracts people who are afraid of immigrants and refugees to oppose our efforts to make our community welcoming, it has proven for the city of Encinitas to be useful from the standpoint of making sure that we are proving the best information possible and doing everything that we can to make the adjustment of being a newcomer to our city easier,” he said.

Kranz said when considering the resolution, he looked at the city’s current efforts in providing information and services to newcomers in Encinitas whether or not they are immigrants or refugees.

Kranz said he is not concerned that the Trump Administration would withhold money from the city of Encinitas because its welcoming status.

“I think people like to talk a big game about immigration and illegal immigration but they really have no concept of just how important that labor force is,” he said.

WHAT ARE EVERYONE’s RIGHTS?

Federal law enforcement officers, including those from Border Patrol and and Immigration and Customs Enforcement, can come onto private property without a warrant if the property is within 25 miles inland of the border.  However, they cannot enter a home or dwelling if they do not have a warrant signed by a judge, or a resident’s consent. Individuals  have the right to remain silent.

If an individual is approached  on the street he or she is not required to answer questions or provide identification. They can ask if they are being detained or are free to go. If the individual is being detained, they have the right to remain silent. They have a right to ask for an attorney if theyare being arrested and, if they are from another country, to speak with someone from their own consulate.

Border Patrol agents may stop vehicles at certain checkpoints to ask questions that establish the occupants’ citizenship. Agents can also inspect the exterior of the vehicle. Individuals have the right to remain silent but in doing so they may be held until citizenship can be established.

AT THE BORDER OR OTHER PORTS OF ENTRY

At the border agents do not need a warrant, reasonable suspicion or consent to search vehicles, its occupants or belongings.

IN JAIL OR DETENTION

Individuals who are arrested or detained have the right to remain silent and are not required to sign any documents without conferring with an attorney.

WHAT IS A SANCTUARY/WECLOMING  CITY?

There is no standard definition of sanctuary city or welcoming city, at least not one that has been established in court. Some municipalities that designate themselves one or the other differ in their approach, offering varying degrees of cooperation between local and federal government on immigration policies. Generally, sanctuary cities focus on the extent of local law enforcement involvement while welcoming cities address a spectrum of city services, from public safety to public health. Neither offers immunity against deportation.