The Eastlake High School baseball team finished runner-up in last year’s San Diego Section Open Division playoffs. The Titans, who were seeded No. 1, lost their first game in the double-elimination tournament but gave a courageous effort to battle back to force a championship rematch against eighth-seeded Poway.

Poway won, 5-4, in the clash of teams with Titan nicknames to turn the division on its head.

Eastlake is back on top of the section rankings with a commanding 14-1-1 record this spring. The Titans defeated host Hilltop, 9-2, in a Mesa League game last Friday to extend their current winning streak to eight games.

EHS head coach Dave Gallegos said his team is taking matters slowly this season, careful not to look too far ahead, especially with the youth laden squad this year.

“We’re a young team,” Gallegos said somewhat cautiously. “They just believe they can win. Our pitching has been phenomenal. Great kids, very coachable. We have some seniors who are carrying the group.

“This is the youngest team I’ve had in seven years.” 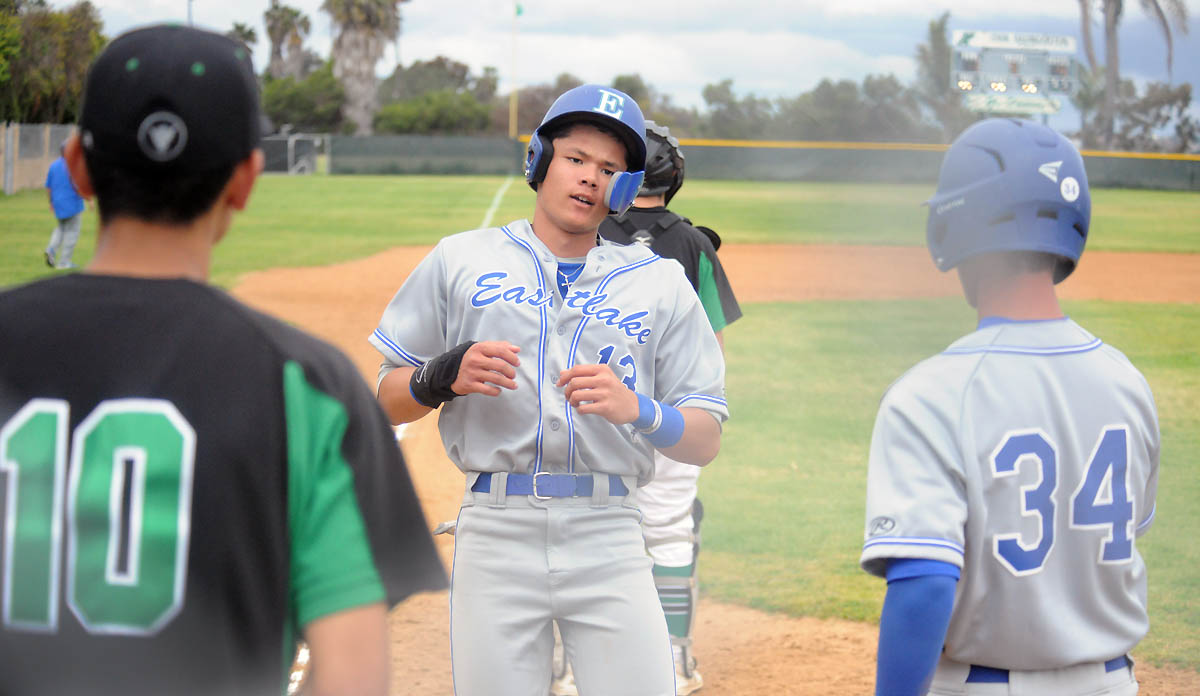 Seniors who have stood out so far this season include SDSU-bound pitcher Ricky Tibbett and third baseman-pitcher Keoni Cavaco.

Tibbett improved to 4-0 on the mound after tossing a one-hit shutout against the visiting Hilltop Lancers on April 3. Tibbett struck out 10 batters as he carried a perfect game into the seventh inning.

Eastlake defeated Hilltop, 9-2, in last Friday’s series finale to improve to 6-0 in league play. Underclassmen dominated the score book in helping the Titans secure their 14th victory in 16 outings. 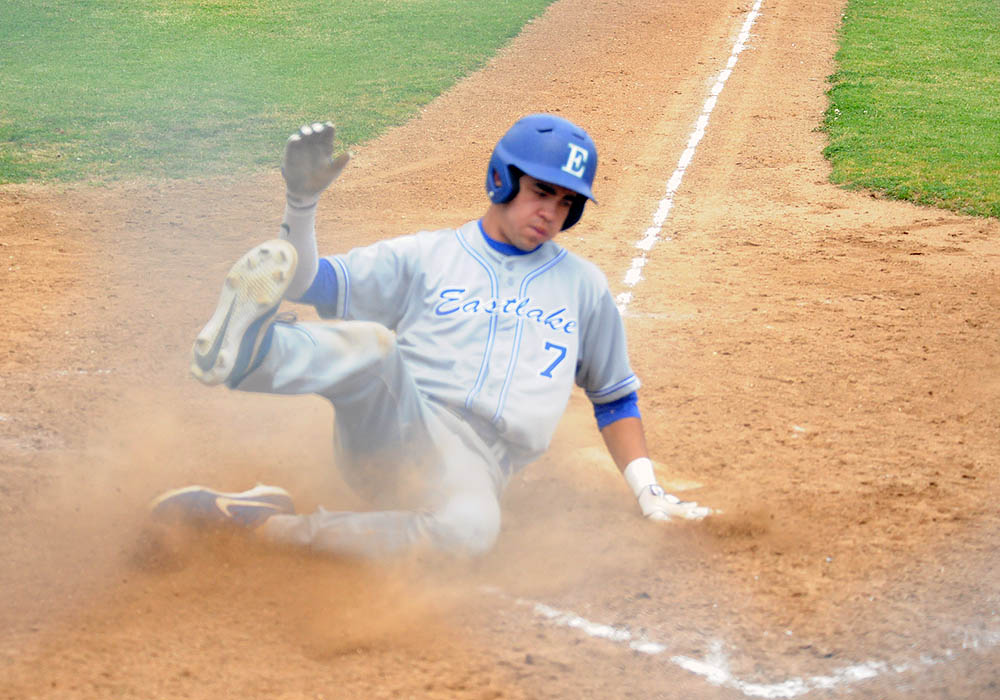 Eastlake built a 4-1 lead in the early part of the game before tacking on five runs in the later stages of the contest.

Cebulski and Armstrong each recorded two strikeouts while on the hill.

The Titans open a two-game series against the Chula Vista Spartans on Tuesday (at CVHS) and Wednesday (at EHS). Both games are scheduled to start at 3 p.m.

Teams will break from league play to participate in next week’s annual 69th Lions tournament. Eastlake will host Las Vegas Desert Oasis in Monday’s Open Division opener, host Agoura on Tuesday and close out pool play with a game at Torrey Pines on Wednesday.

“Our goal is to win the next game we play,” Gallegos underscored. “These kids believe. It comes down to the great chemistry we have. They’re a team. They find a way to play their best.”

For a full tournament schedule, visit the website at www.lionsbaseball.org.

Eastlake High School’s top-ranked baseball team picked up two more wins in a series sweep this week over the Chula Vista Spartans to improve to 8-0 in Mesa League play, 16-1-1 overall.

Ricky Tibbett improved to 5-0 on the mound after allowing two hits while striking out seven batters in five innings in Tuesday’s 5-1 win at CVHS.

Marcelo Mayer drove in two runs while senior Jake Cekander went three-for-three with one RBI and two runs scored. Iran Fuentes and Keoni Cavaco each drove in one run.

Juniors Dante Schmid and Jacob Saldana finished up in relief.

The Titans swept the visiting Spartans with a 13-1 win on Wednesday. Eastlake scored 13 runs on 13 hits while holding Chula Vista to one run on two hits. 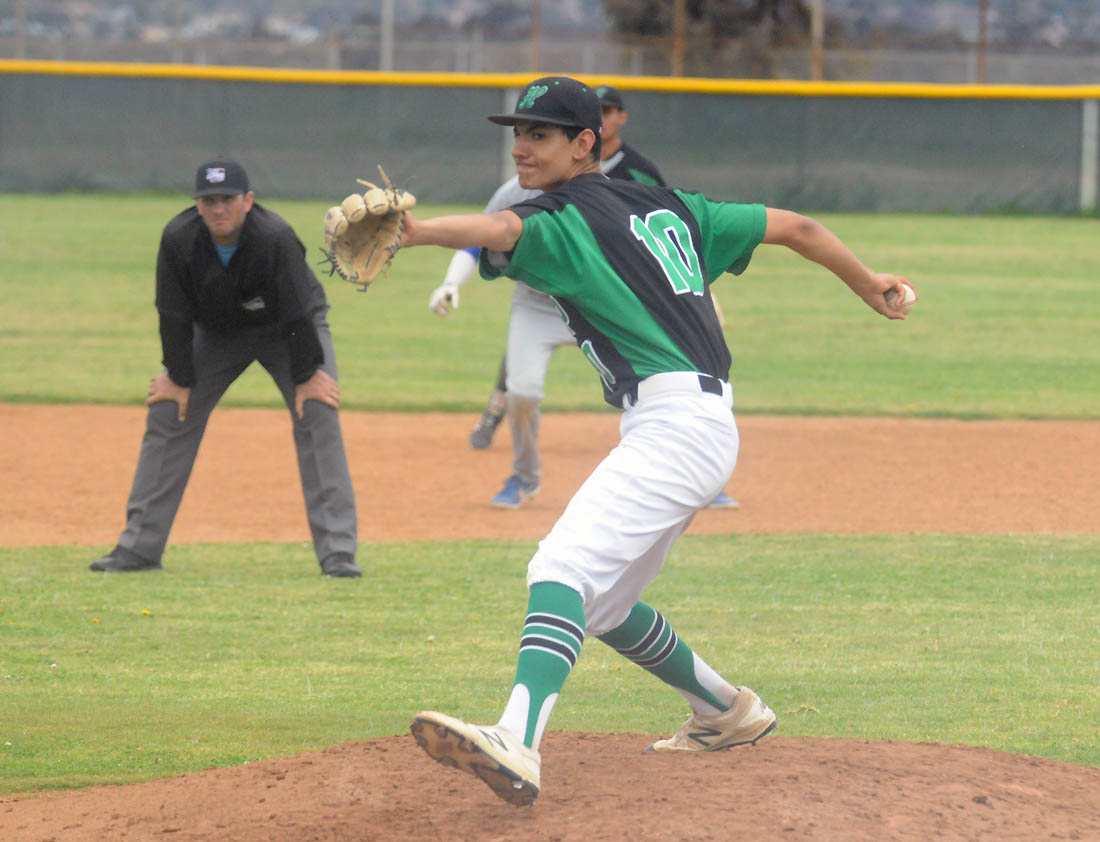 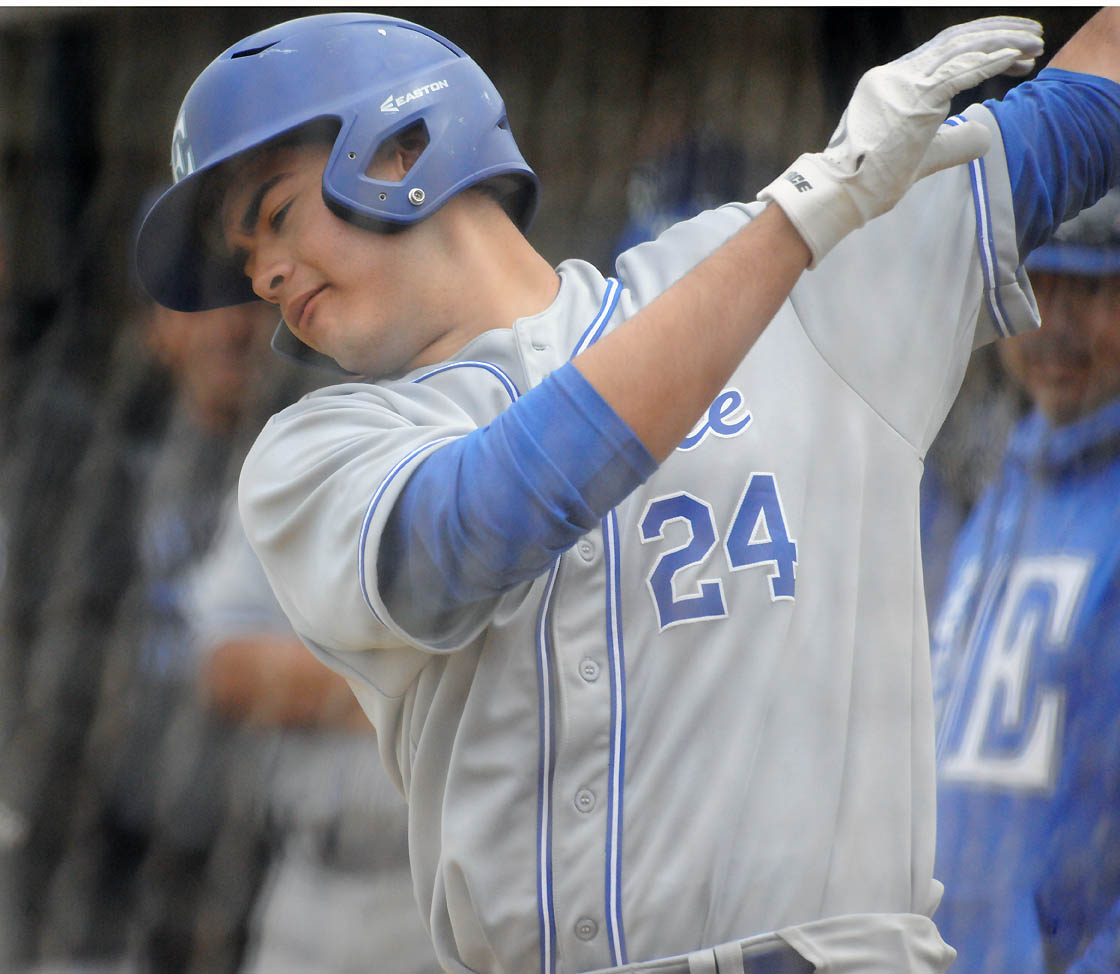 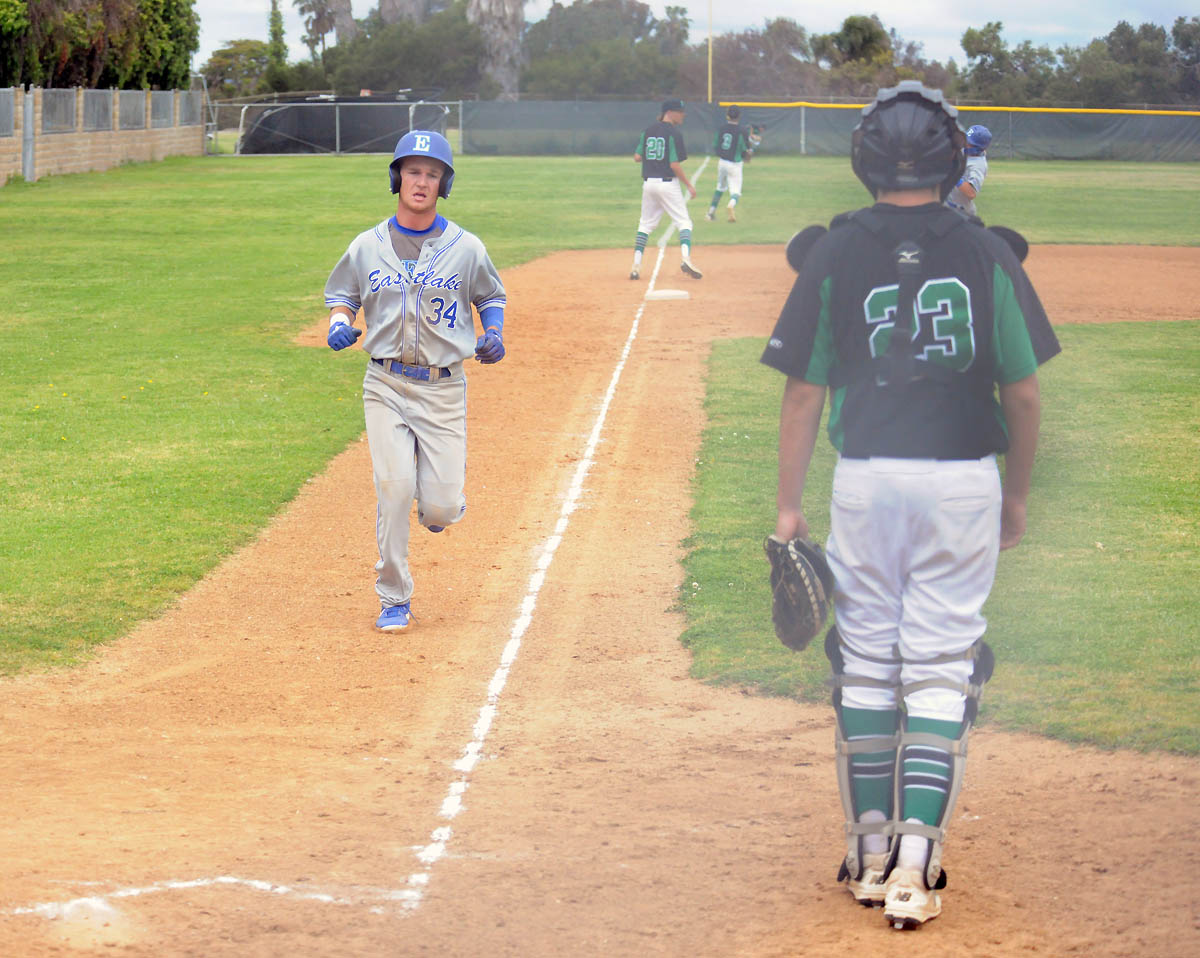 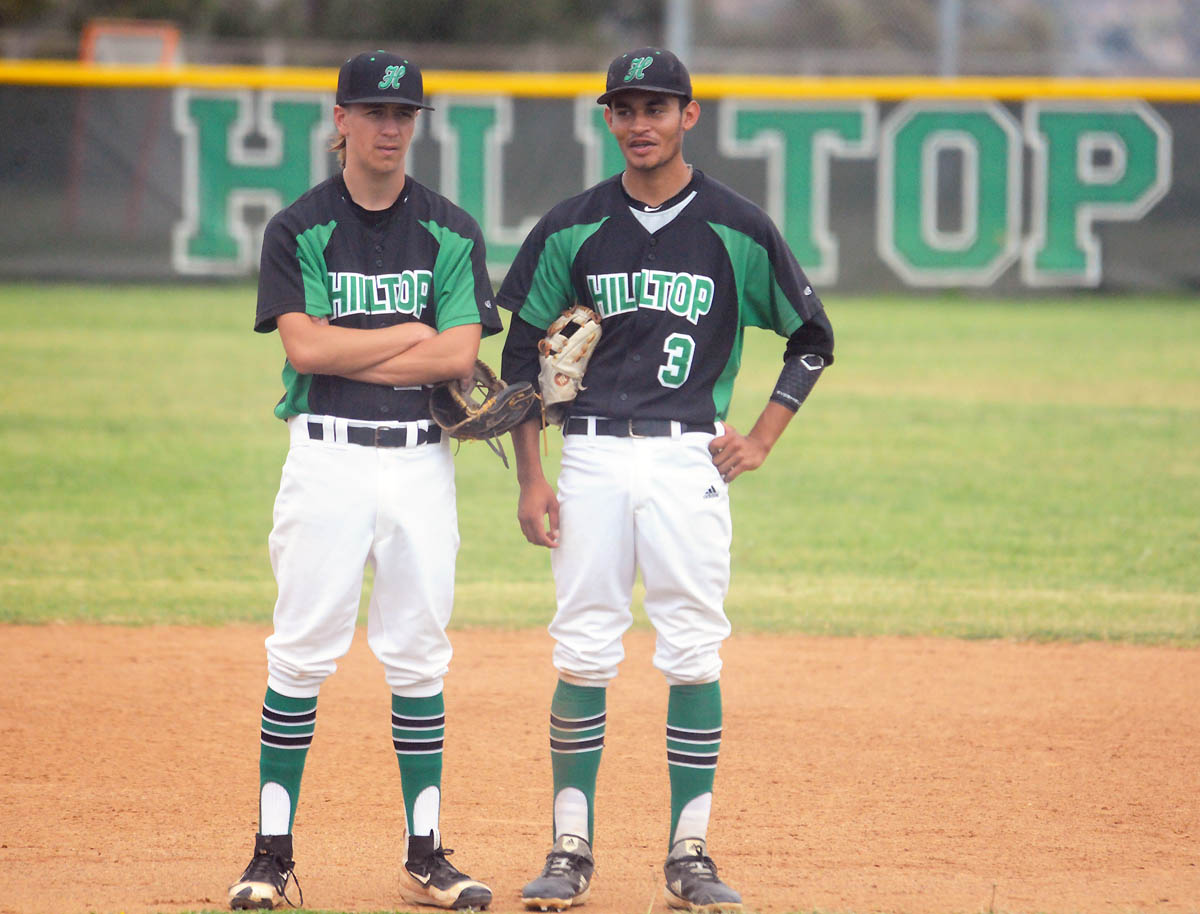 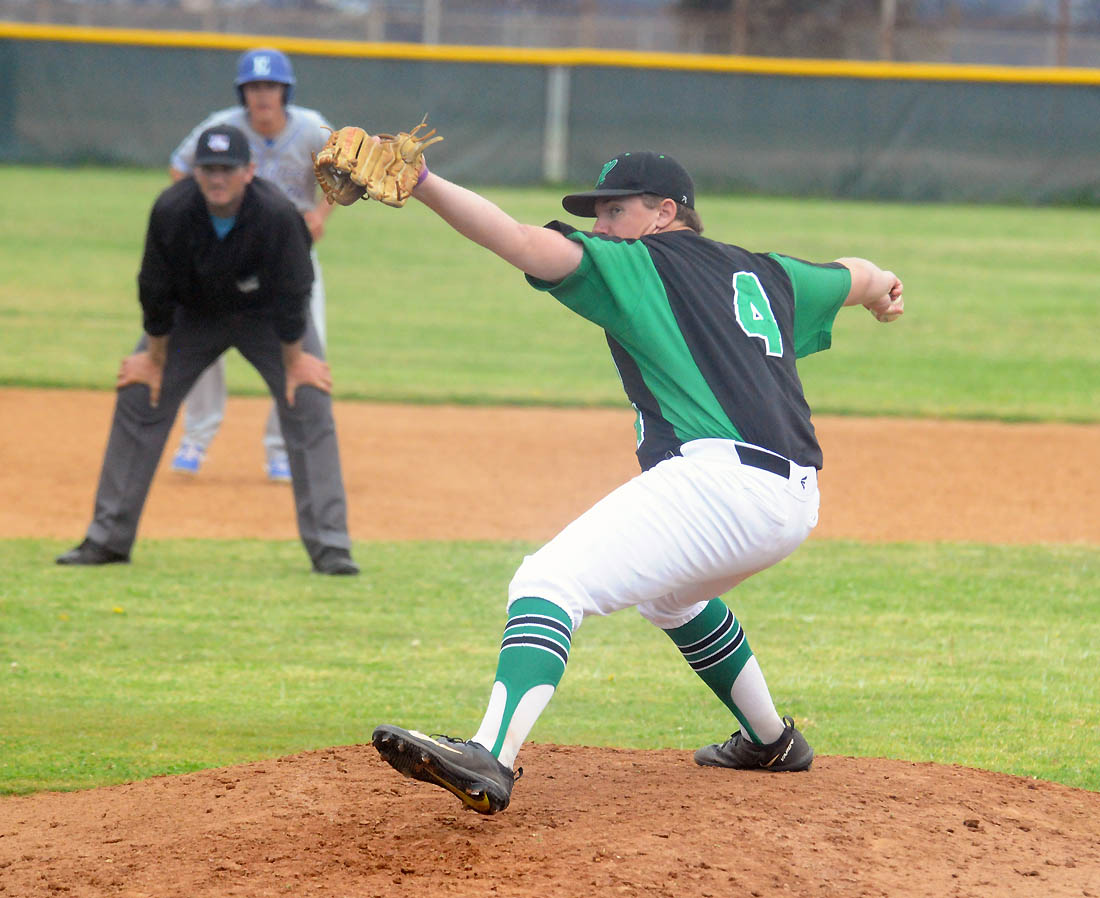 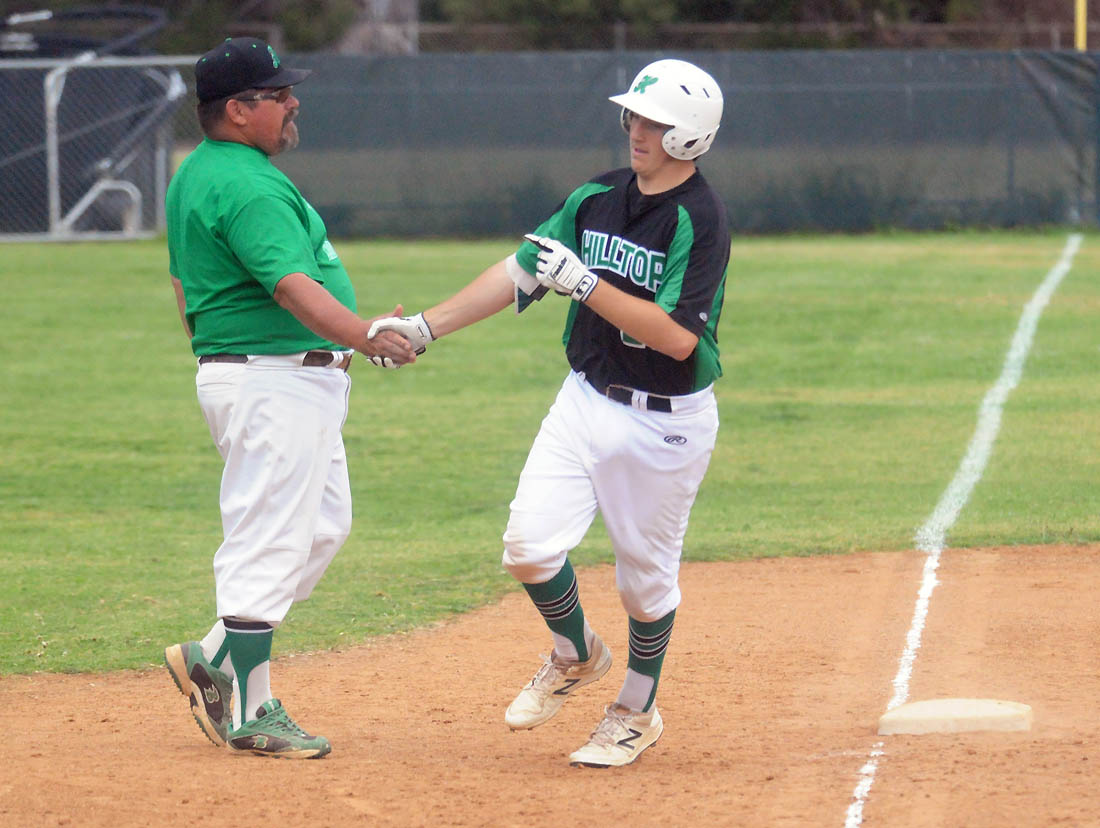 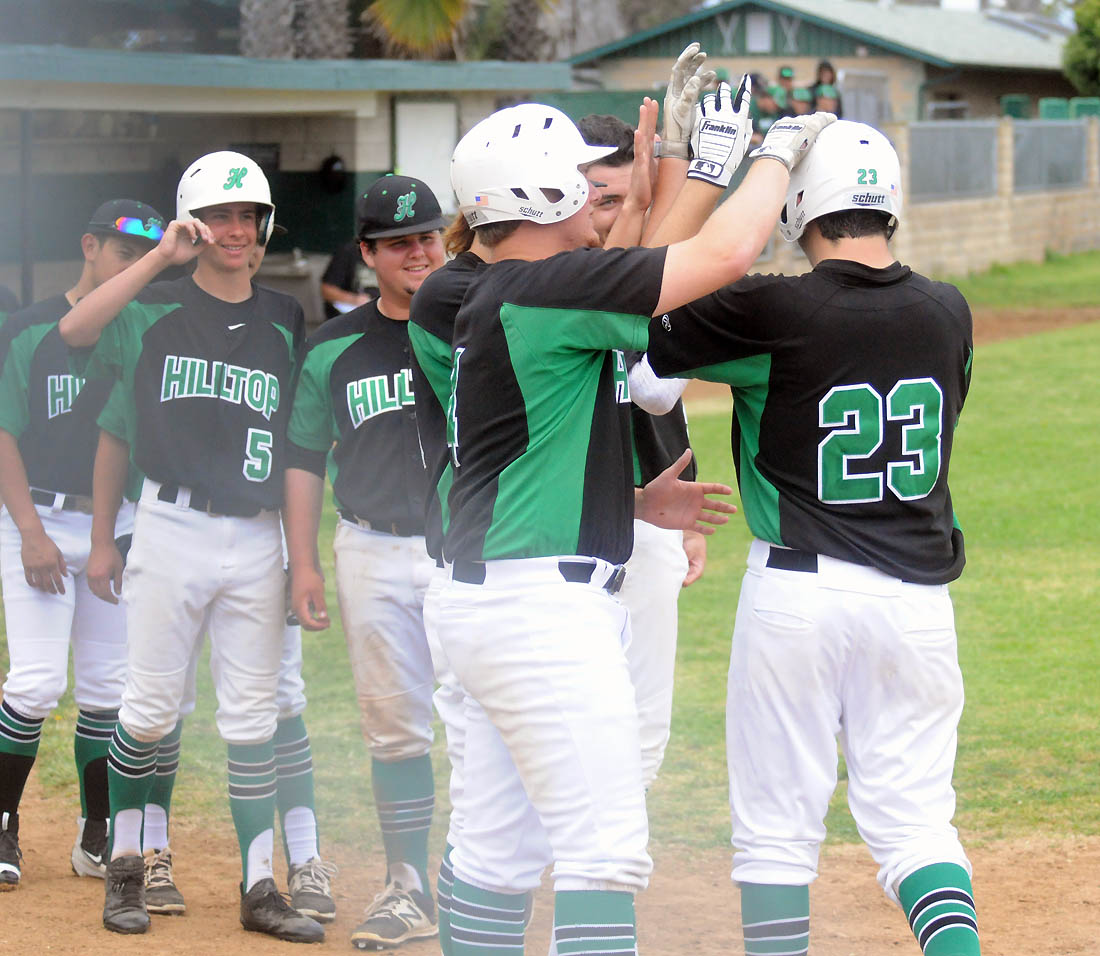 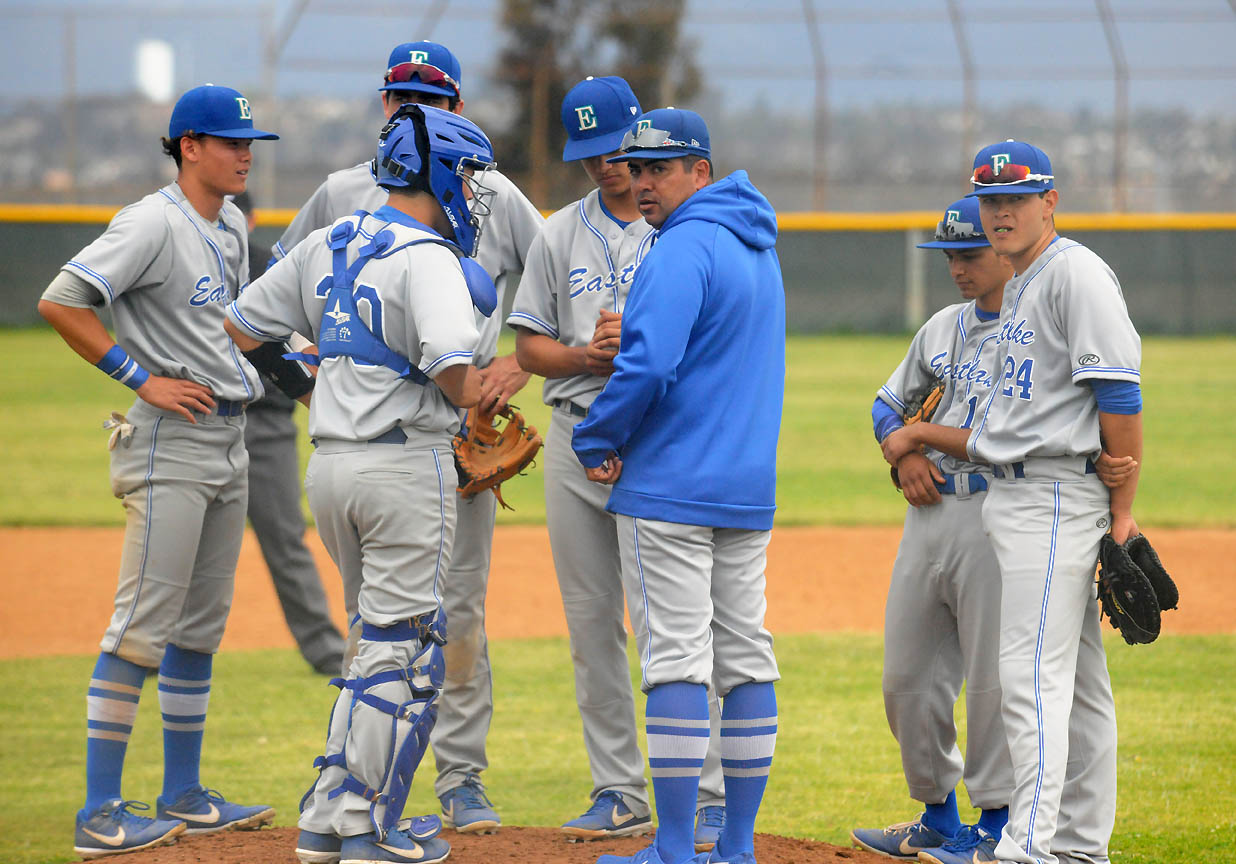 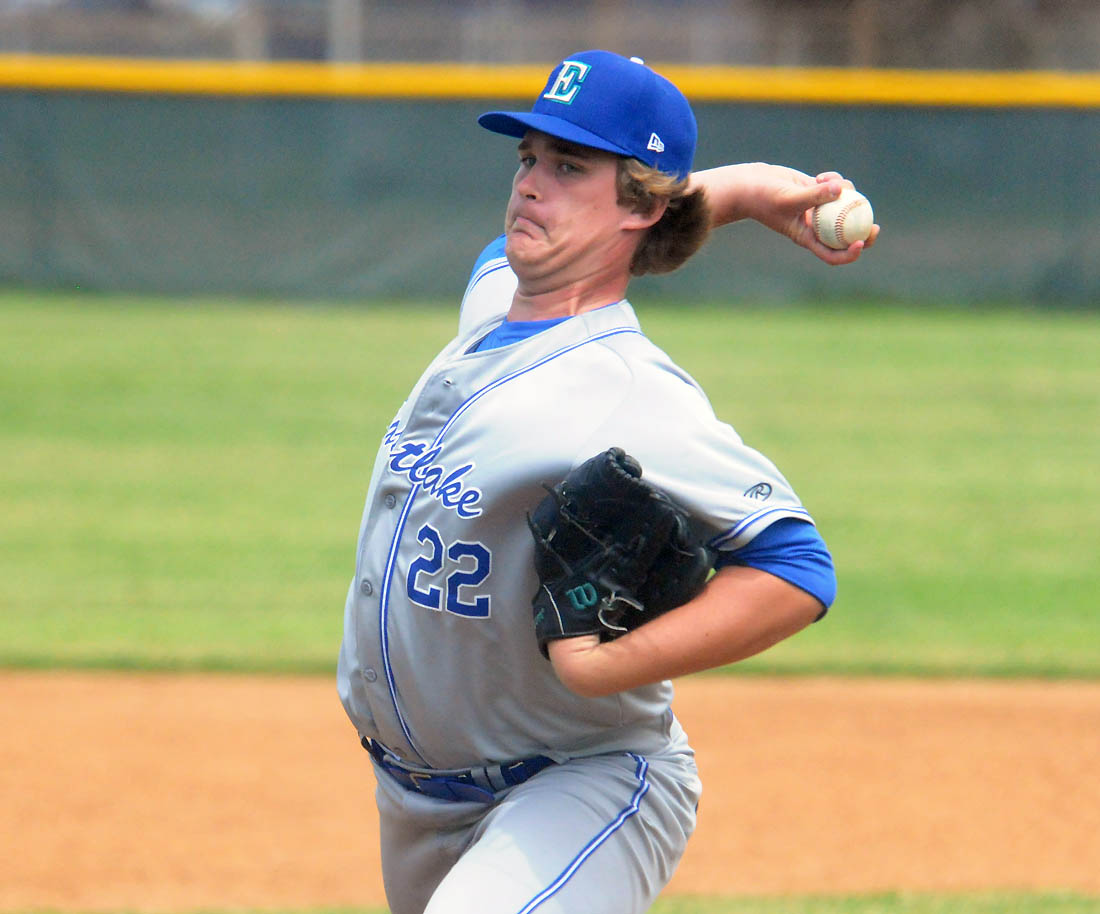 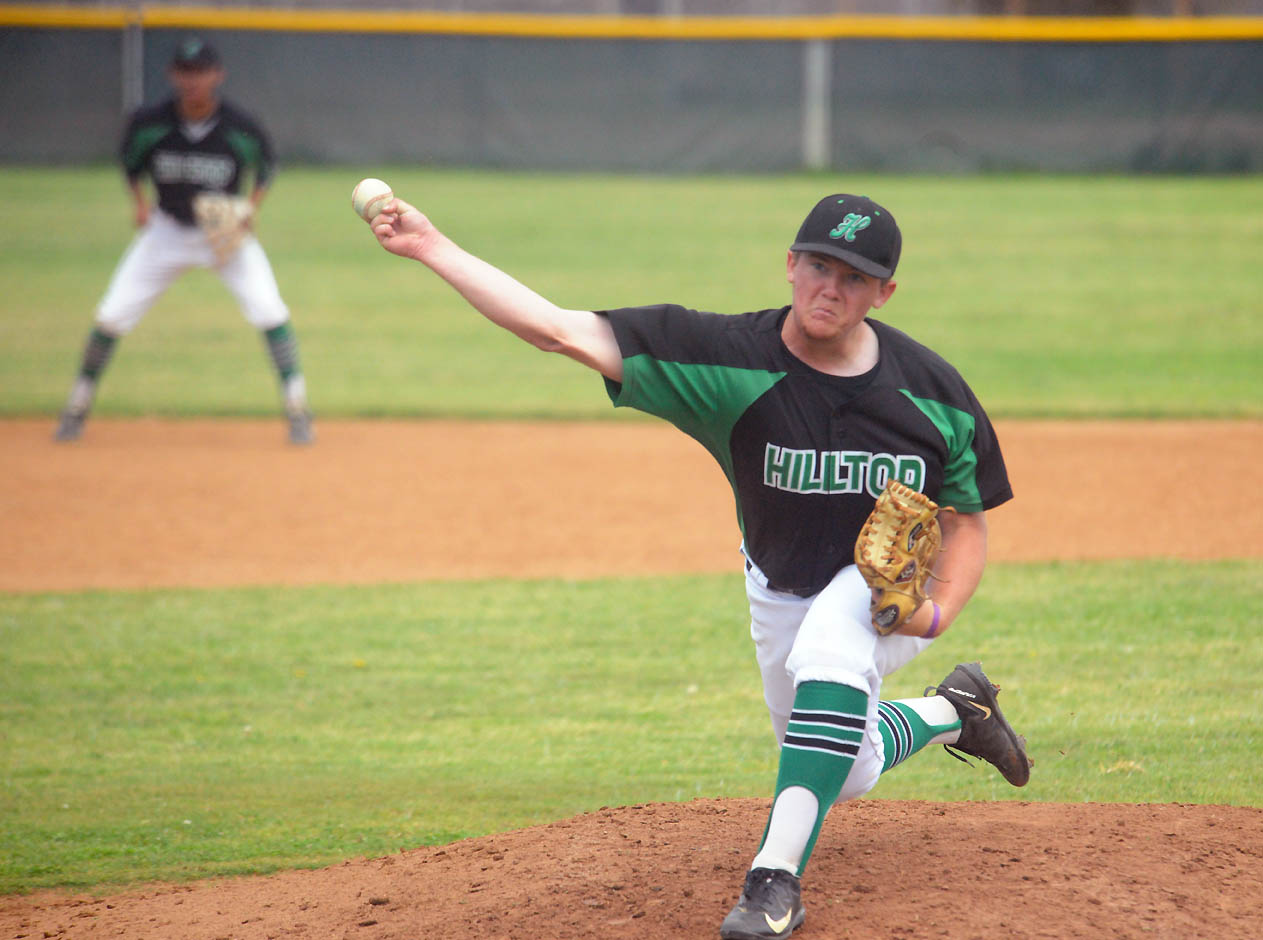 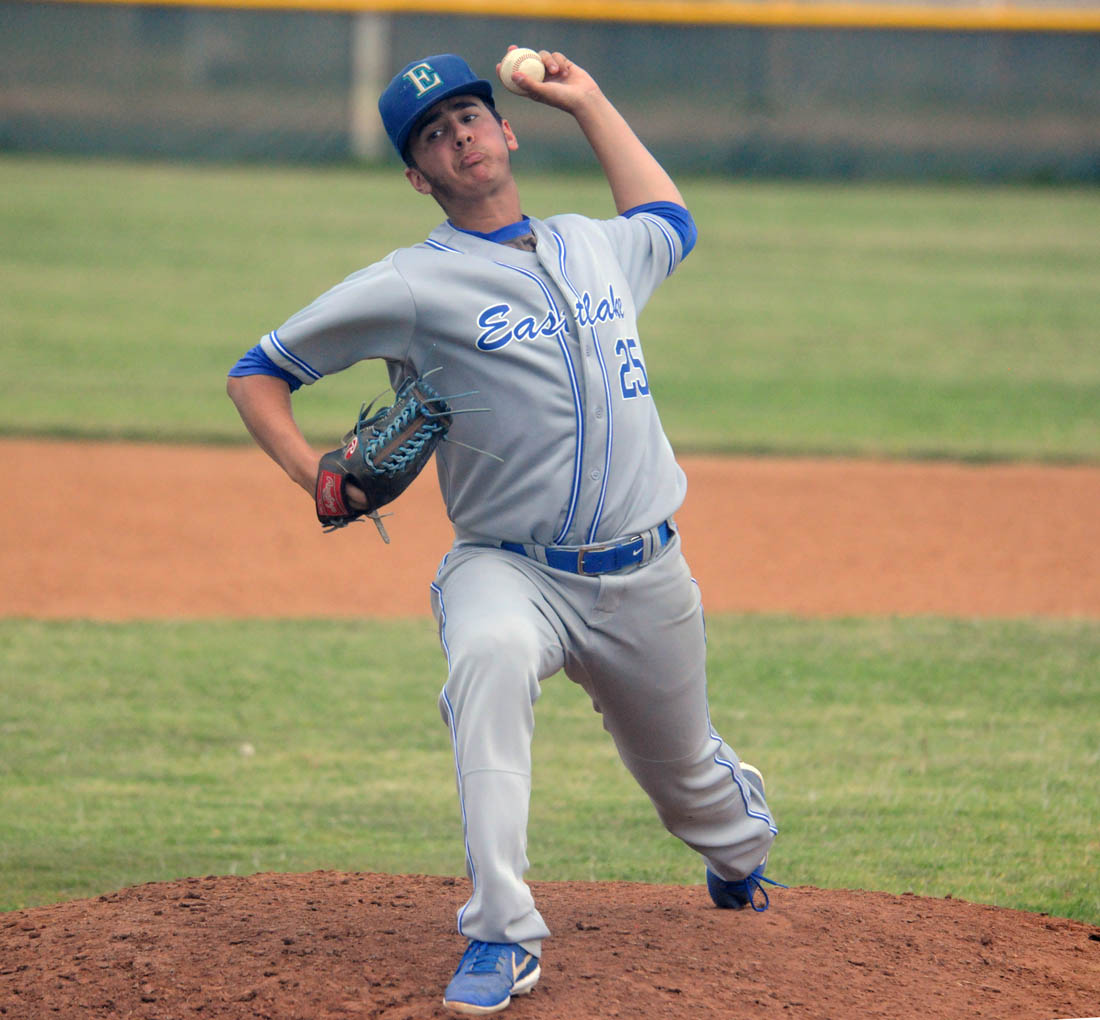 Behind Julian Escobedo’s 3-for-4 performance and Justin Goossen-Brown’s eight-inning start, the San Diego State baseball team defeated Nevada, 6-2, on Aoril 6 in Reno, Nev. The Aztecs improved to 17-14 (6-6 Mountain West), while the Wolf Pack dropped to 16-14 (6-8 MW).

After allowing a first-inning run, Goossen-Brown held the Wolf Pack scoreless for the remaining seven innings of his outing and finished his night with nine strikeouts while only allowing one walk and four hits.

The SDSU lineup was held scoreless for the first five innings, but a four-run sixth inning provided Goossen-Brown with more than enough run support. Casey Schmitt (Eastlake) tied the game at 1-1 with a single scoring Matt Rudick, while in the next at bat, Angelo Armenta scored both Schmitt and Escobedo (Eastlake) on a 2-RBI down the left field line. SDSU capped the sixth-inning scoring with a Mike Jarvis RBI double, allowing Armenta to cross home plate.

In the ensuing inning, Escobedo drove home Devyn Lopez and Ryan Orr on a single to bring the score to 6-1.

The Wolf Pack ended a run of seven consecutive scoreless innings with a single run in the ninth, bringing the score to its final 6-2.

SDSU’s 2-3-4 hitters of Escobedo, Schmitt, and Armenta all recorded multi-hit showings, while Escobedo and Armenta both drove in two runs apiece.

On the mound for Nevada, Owen Sharts fell to 2-6 on the year with seven hits and four runs allowed over six innings pitched.

NOTES
– Justin Goossen-Brown’s eight innings stands as the longest outing by an Aztec this season and the longest since Goossen-Brown threw a nine-inning complete game against San Jose State on May 12, 2018.

– SDSU improves to 13-2 and has won nine games in a row when out-hitting their opponent.

– SDSU pitching recorded its 18th 10-plus strikeout game of the season.

The San Diego State baseball team used four RBI from Chad Bible and four shutout innings of relief from Adrian Mardueno in a series-clinching 11-3 win over Nevada on April 7. The Aztecs improved to 18-14 (7-6 Mountain West), while the Wolf Pack fell to 16-15 (6-9 MW).

After a Dillon Shrum homer in the bottom of the first cut the Aztec lead to 3-1, Leonhardt and Bible broke things open in the third. Leonhardt brought home Casey Schmitt (Eastlake) on an RBI single before Chad Bible hit his team-leading fourth home run of the season — a three-run shot — to give the Aztecs a 7-1 lead.

The Aztecs tagged the Wolf Pack for another four runs an inning later with an error by Joshua Zamora allowing the first two pair of runs to score. Bible capped the fourth inning with a single up the middle, scoring Mike Jarvis from second for an 11-1 SDSU lead.

Making his first career start, Casey O’Sullivan (Valhalla) pitched three innings, allowing two runs on five hits. O’Sullivan got into a bit of trouble in the fourth, allowing three consecutive singles before Mardueno took over on the mound in a bases-loaded, no-out situation.

Mardueno immediately struck out the first two batters he faced, and after allowing an infield single, Mardueno minimized the damage by recording his third strikeout of the frame to keep it an 11-2 Aztec lead heading to the fifth.

That infield single was the only hit Mardueno allowed, as Mardueno faced the minimum over the next nine batters before Jacob Flores took over and pitched the final two innings of the game.

Mardueno, who impressed earlier this week with seven shutout innings at No. 6/7 Oregon State, finished his outing with 4.0 shutout innings, one hit and one walk allowed to earn the win.

– Junior reliever Adrian Mardueno finished the week with a 2-0 record, 11 innings pitched, three hits, no runs, and two walks allowed while striking out 12 and holding opponents to a .091 batting average. With his outing today, Mardueno has not allowed an earned run to score over his last 14.1 innings pitched and stranded five of a possible six inherited base runners this week.

The San Diego State baseball team defeated Loyola Marymount, 4-2, on Tuesday night (April 9) at Tony Gwynn Stadium. The Aztecs, now winners of five of their last seven, improve to 19-14 on the year while the Lions fall to 20-12.

Both Aaron Eden and Casey Schmitt (Estlake) shined on the mound for the Aztecs, with Eden starting on the mound and earning his second win of the season after six innings with five hits and one earned run allowed. Schmitt, making his first relief appearance since March 10, kept the Lions quiet, earning his third save of the year with three innings pitched, three strikeouts, and one hit.

The Aztecs were quick to score the game’s first runs, as Matt Rudick posted a lead-off double in the bottom of the first and later scored on a one-out Angelo Armenta single to centerfield. Brian Leonhardt (Eastlake) hit the first of his two doubles later in the frame, allowing Schmitt to score on a well-hit line drive to right field.

After scoring an unearned run in the third, the Lions were threatening after a pair of Aztec errors loaded the bases for LMU. Fortunately for Eden, the freshman was able to work his way out of it, forcing LMU’s Cooper Uhl into a 4-6-3 inning-ending double play to preserve the 3-1 lead.

The Lions cut the deficit to 3-2, using Trevin Esquerra’s 11th home run of the season for a single run in the sixth inning.

The Aztecs added an insurance run in the eighth, as base hits by Ryan Orr and Devyn Lopez and a walk by Matt Rudick loaded the bases. Julian Escobedo (Eastlake) drew a bases-loaded walk in a five-pitch at bat to bring home Orr before the Lions got out of the inning with limited damage after Schmitt hit into a fielder’s choice to shortstop.

Armenta, Leonhardt and Orr each went 2-for-4 at the plate.

LMU’s Mark Finkelnburg was handed the loss after recording just one out and surrendering three runs — all earned — on three hits and a walk.

– Matt Rudick extended his on-base streak to 27 games and has recorded a hit in 31 of 33 games this year.

– Casey Schmitt recorded his 12th career save, putting him in sole possession of ninth in the program record book.

UP NEXT
SDSU continues its break from Mountain West play this weekend, visiting Cal State Fullerton for a three-game series set to begin Friday (April 12) at 7 p.m.