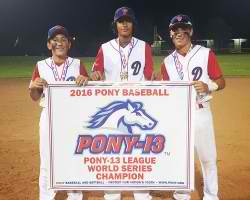 They were a year older and the venue wasn’t on the other side of the country, but former Sweetwater Valley Little Leaguers Jake Baptista, Nate Nankil and Ariel Armas can finally call themselves World Series champions.

Sweetwater Valley lost to Texas twice in the tournament: they beat every other Little League team in the United States they faced in 2015.

The talented trio lost only one game in their magic carpet ride this summer as members of the Emerald Diamond all-star team. Emerald defeated Panama, 12-0, in Monday’s championship game at the Pony-13 International World Series in Whittier.

“It was kind of a redeemer,” explained Baptista, now an eighth grader. “We lost to Texas (in the game to get to the U.S. division LLWS championship game). It gave me a chance to win a World Series with Nate and Ari. That was the most exciting thing for me.”

“Last year, we were dreaming of winning a Little League World Series championship,” Armas explained. “We came close and it’s cool to win a world championship this year. It was cool to have two teammates with me (from last year’s Sweetwater Valley team). Winning this with them was great.

“It was fun. In baseball, there are so many opportunities to improve. You can’t always win every game; some games you lose. But you always have chances to do better.

“Last year we were third in the Little League World Series; this year we were first – that’s what’s exciting for me.”

“It felt unbelievable — just winning the whole thing feels great,” explained Nankil, who recently came off a stint with the 14U United States National Development Team in Cary, N.C.

“Nate helped us with his speed in the outfield and his clutch-hitting,” Baptista explained. “Ari is one of the best catchers I’ve played with. I just focused on playing good defense in center field or first base, wherever I was, and tried to follow that up with good hitting in clutch situations, like hitting behind runners.”

It added up to a memorable summer.

“It’s fun to make friendships that last a lifetime,” Armas said. “It’s cool to see yourself and your friends developing their baseball skills every day while you’re growing up. It’s a once-in-a-lifetime opportunity to be able to experience this together. We are a family.”

The three former Little League World Series standouts excelled in new horizons while playing Pony baseball. The Pony-13 level was a step up with base paths separated by 80 feet rather than 60 feet (as in Little League) and outfield fences pushed back significantly.

“The pitching was good but the hitting was more challenging in Pony than in Little League,” Baptista explained. “Last year, we were playing on fields where the fences were 225 to 280 feet from home plate; this year the fences were 360 to 380 feet away.”

“I liked the bigger fields because it prepared you for high school,” added Nankil, a freshman at Bonita Vista High School. “Hitting was our most dominant tool.”

“It was an exciting journey,” Armas said.

Lucky 13
The El Cajon-based team accumulated four championship banners and a 15-1 record. The one loss was to rival Emerald Crimson in the region tournament back on July 10.

Emerald defeated Alea (Hawaii) twice, as well as California rivals Campbell and Covina once each, at the preceding West Zone tournament July 21-24 in Whittier after going 3-1 at the Southwest Region championship tournament July 6-10 in Lakeside.

It all came together on Monday.

Emerald scored 12 runs on 12 hits while Panama was held hitless in the contest with six errors.

Richardson went two-for-five at the plate with two runs scored and one RBI while pitching hitless ball. Pulido and Nielsen each drove in two runs and scored twice while Mayer scored twice and drove in one run. Arreola collected one RBI.

Emerald defeated Minatitlan, 16-0, in the semifinals. Emerald pounded out 16 hits in the contest while limiting the Mexico Zone representative to just five hits.

Baptista swung the big stick with three hits, three RBI and two runs scored while Nankil drove in two runs on two hits and scored three runs. Armas had one hit and scored one run.

Nankil went two-for-four in the two runs scored and two RBI in the 9-7 win over Hagerstown in a second-round winners bracket game.

As a point of reference, the Emerald Crimson team (which advanced as far as the West Zone tournament) had two other 2015 Sweetwater Valley Little League players on its roster: Levi Mendez and Isaac Artalejo.

Emerald Pony League coordinator Mingo Villa said the league’s two World Series championships on the same weekend may be unprecedented in Pony Baseball, according to information he has received.

“All the Pony League directors I’ve talked with have been impressed by how Emerald has turned its program around and they’re looking forward for more good things to come,” Villa explained. “The league is overwhelmed with joy — the players, the parents and the city of El Cajon.”

Villa said plans are in the works for a public event showcasing the two World Series championship teams. An announcement will be made when plans are finalized, Villa noted.

Carter tossed a one-hitter in Saturday’s championship game. The Emerald team scored nine runs in the first inning, forcing Mexico to go through three pitchers before putting out the fire.

Twenty of the team’s 21 wins ended in 10-run mercy-rule decisions this summer.

“The boys just kept hitting and hitting,” Villa noted in regard to the team’s unrelenting attack.

Carter’s jersey will be showcased in the Pony Hall of Fame to commemorate the team’s accomplishment, Villa said.

However, all agreed it took a total team effort.

Road to the World Series
Emerald’s Mustang-9 team participated in five tournaments en route to winning this year’s World Series championship – the first for the league at that age level.

The El Cajon team started its monstrous world championship odyssey by first winning the San Diego East/South Section tournament held June 18-26 in Ramona. Emerald went through the nine-team field undefeated in five games. Emerald opened the tournament by defeating La Jolla Blue by a score of 19-0, then defeated Ramona by a score of 19-8 in its next game to continue to advance in the winners bracket.

But the outcome ended with a 12-0 victory in favor of Emerald to claim the section championship and the first of its five post-season banners.

Emerald upped its record to 9-0 after winning all four of its games at the region tournament. The El Cajon team made a statement in its first game after defeating the San Marcos Grizzlies, the third-place team from the San Diego North Section, by a score of 24-2. Emerald then defeated Escondido, the San Diego North Section runner-up, by a score of 11-7 to advance to the winners bracket final.

Emerald defeated region tournament host Carlsbad, 10-3, to advance to the championship game. Carlsbad then defeated San Marcos Strong, the San Diego North Section champion, by a score of 13-1 in the challenger bracket final to earn a championship rematch against Emerald.

Emerald won its second championship banner by defeating Carlsbad by a score of 17-8.

Emerald defeated Charter Oak, 9-0, in its first game and then defeated Olive, 9-1, in its second game. Emerald then defeated Whittier Select, 12-3, in its final bracket game to meet Irvine, the winner of the other bracket, in the championship game.

Emerald shut out Irvine, 4-0, to win the tournament championship.

Two teams advanced from the Southern California Super Region to compete in the West Zone tournament. Emerald receive the No. 1 berth and Simi Valley received the No. 2 berth after defeating Irving, 10-9, in eight innings in a playoff game for second place.

Despite the move up a notch in competition level, Emerald continued its winning streak by defeated Seattle by a score of 20-2 in its first game at the zone finals. The El Cajon team then turned back a challenge from Scottsdale in its second game to win 15-9.

Emerald drew a rematch against Scottsdale in the semifinals and defeated the Arizona team by a score of 15-4 to advance to the zone championship game against Hilo. Emerald defeated the Hawaii team, 13-7, to earn a berth in the Mustang-9 World Series.

Emerald scored 55 runs and allowed just four in a gathering of the world’s elite teams.

The spotlight was clearly on El Cajon.