The Pads seem to be following a familiar script thus far this year, hopefully the ending will be far better than the untimely crash that greeted last year’s squad down the stretch run.

The Padres’ pitching staff collapsed in the late going, and the hitting seemed to dry up as well, in a stretch that saw the team drop 43 of its final 67 games to finish a whopping 28 games behind the division champion San Francisco Giants.

While this year’s pennant race is still in the developing stages, both the Padres and Dodgers have to be wary of the Giants, who sat just 3.5 games back as of last Friday.

The Arizona Diamondbacks (31-25) and Colorado Rockies (28-37) appear less threatening at the moment while trailing the two front-runners by 10 and 12.5 games, respectively.

The Padres utilized the services of 33 hurlers last year; Musgrove, a graduate of Grossmont High School in La Mesa, was the only Pads’ pitcher to post double-digit victories.

Melancon had 39 saves to his credit with 59 strikeouts in 64.2 innings. Musgrove topped the team in games (32, including 31 starts) and strikeouts while Darvish ranked second with 30 starts and 199 strikeouts in 166.1 innings.

Musgrove and Darvish are leading the Padres’ pitching staff again this year.

Musgrove improved to 8-0 in 2022 with a 1.59 ERA and 81 strikeouts in 79 innings following a 6-4 win over the Cubs on June 16 in which he went seven innings with five hits allowed and two earned runs.

Taylor Rogers is the team’s early season saves leader with 20.

This is Musgrove’s seventh year in MLB, his fifth in the National League and second playing for his hometown team. He was originally drafted by the Toronto Blue Jays in the first round (46th overall) in the 2011 draft right out of high school.

He spent three seasons with the Pittsburgh Pirates before joining the Padres. He was part of a massive 10-player trade with the Houston Astros on July 20, 2012. He played two seasons in Houston, winning a World Series championship in 2017, before moving over the Pirates in another trade.

He pitched in Petco Park as part of the MLB Futures Game in 2016 in conjunction with the Padres hosting the MLB All-Star Game. He returned to America’s Finest City as part of a trade with Pittsburgh in January 2021. 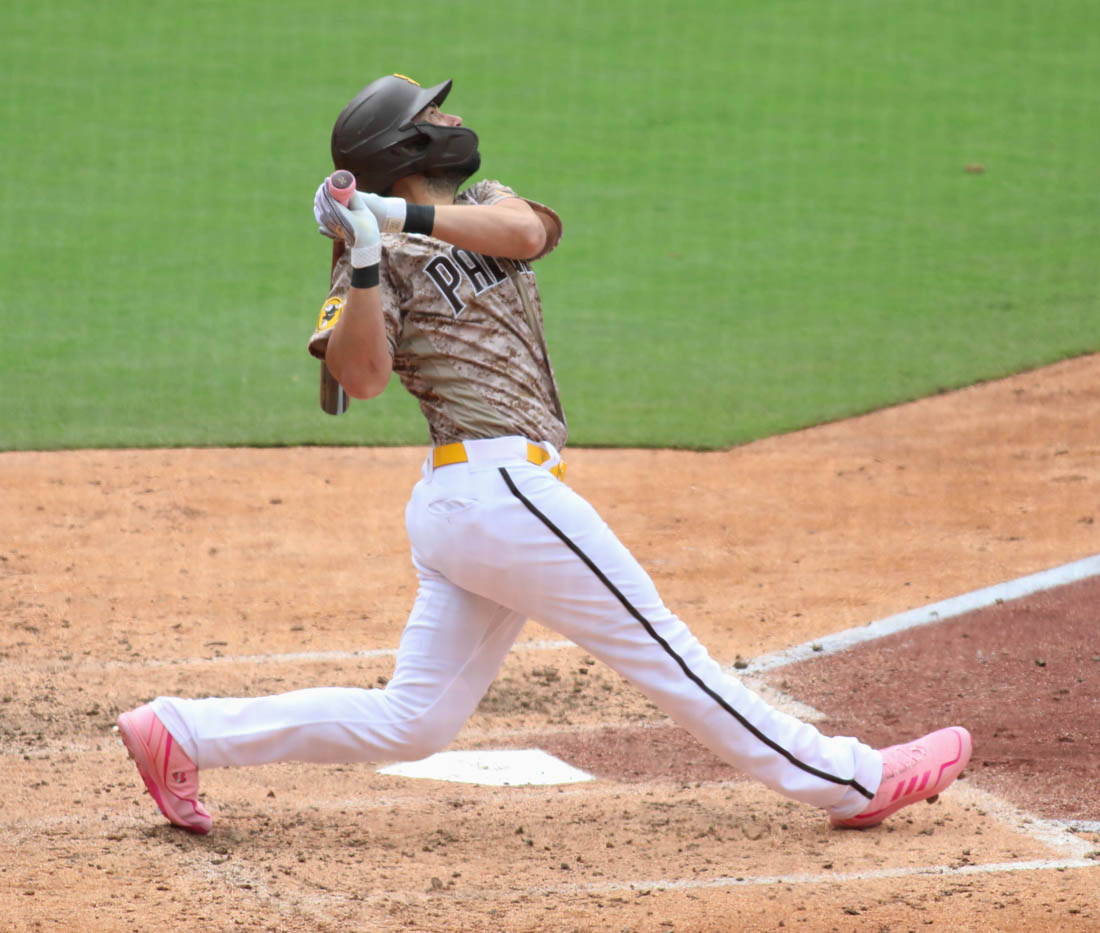 He threw a no-hitter against the Texas Rangers on April 9, 2021, as a member of the Padres. It was the first no-hitter in the team’s 52-year history.

He just missed throwing another no-hitter for the Padres in a 7-0 against Milwaukee on June 3 in which he posted eight scoreless innings and a no-hitter through 7.2 innings.

“I was pretty much relying on breaking balls, my change-up, got a couple outs on that, but ultimately, it was the fast ball that worked,” he said in a postgame interview.

Musgrove is the ultimate local boy who has done good, as the saying goes, for East County.
After spring training concluded during his first year with the Friars, Musgrove visited his former school for a pep talk with the baseball team. Foothiller players appreciated the time he took out of his schedule to speak with them. 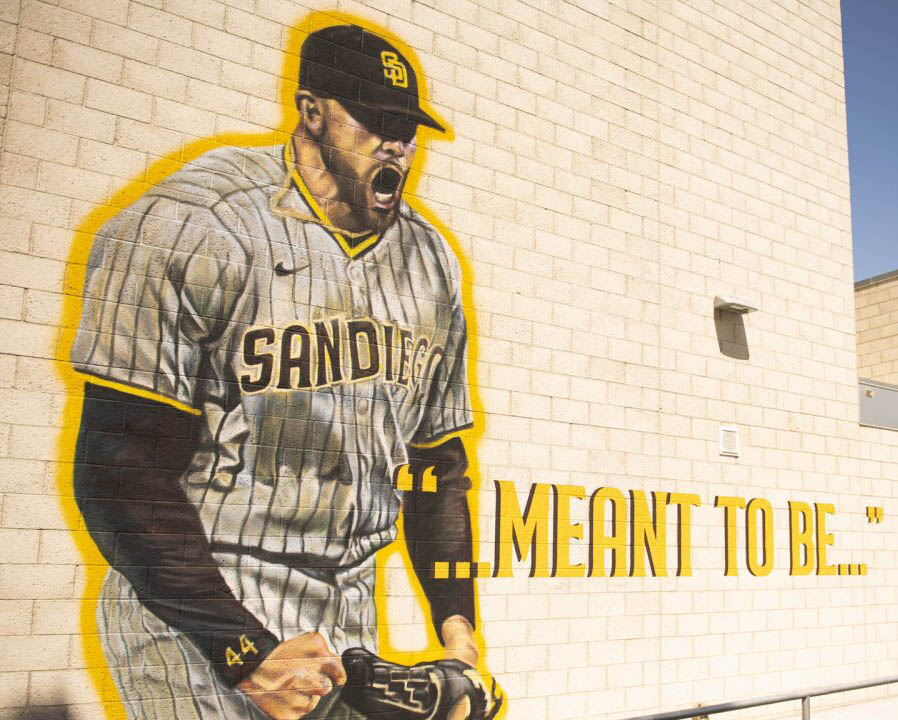 Even more to their delight, he stayed and watched their game.

Following the no-hitter, the Padres unveiled a larger-than-life mural on the Grossmont High School campus. The mural, painted by Ground Floor Murals, features Musgrove in a Padres uniform with the tag line “… Meant To Be …”

Grossmont principal Daniel Barnes told local television that Musgrove was a great athlete at the school, a good student and respected by his peers and the school’s staff.

Musgrove’s local ties run even deeper. The family has operated a coffee shop, Caffé Adesso, in Alpine for more than 20 years. The #44 on the menu, in honor of Musgrove’s uniform number with the Padres, has obviously become a popular order item since he threw the no-hitter.

Hilltop High School graduate Calvin Faucher’s Major League Baseball debut didn’t exactly come up roses but there will simply be days like the one on May 9 at Angels Stadium when he walked Mike Trout of the Los Angeles Angels with the bases loaded and subsequently allowed a grand slam to Shohei Ohtani — the first in his MLB career.

Faucher, a 10th round pick (286th overall) by the Minnesota Twins in the 2017 MLB draft who was acquired by the Tampa Bay Rays in last year’s Nelson Cruz trade, pitched one inning in the American League contest. He allowed three hits, five earned runs, walked two and struck out one in an 11-3 loss in which he picked up a no-decision.

His second outing went much better in a June 3 game against the visiting Chicago White Sox. He pitched one inning, allowed two hits but no runs.

He faced the Minnesota Twins in road games on June 10 and June 12, pitching one inning in each game while combining for three hits (one of them a home run), two earned runs and three strikeouts without a walk.

He took his first MLB loss in Baltimore on June 17 when he allowed two hits and one run in just one-third of an inning in a 1-0 loss to the Orioles.

But he didn’t let that get him down. He picked up his first MLB win in a 7-6 victory in Baltimore the next day after logging a clean slate in one inning of work.

He remained on active duty with an inning of work in Monday’s game against the visiting New York Yankees with one walk and one strikeout in one inning on the hill.

His debut statistics aren’t overwhelming: a 1-1 record in seven games with a 9.82 ERA and five strikeouts in 6.1 innings. But the numbers should get better with time.

MLB analysts say it’s likely Faucher, 26, will split time between Tampa Bay and its AAA affiliate in Durham, N.C. At the time of his call-up this year, he had posted a 5.02 ERA and 15 strikeouts in 14.1 innings for the Bulls.

He spent his first three seasons in the minor leagues at the High-A, A, AA and AAA levels. He did not play in 2020 due to the cancellation of the minor league season because of the COVID-19 pandemic.

Faucher appeared in 31 games for the Lancers his junior and senior years, batting 0.233 with 11 runs scored and 10 RBI in 73 plate appearances. He picked up three wins as a pitcher in 16.1 innings with 12 strikeouts.

He recorded a 1.05 ERA as a junior before going on to play collegiate baseball at UC Irvine, where he pitched two seasons for the Anteaters. 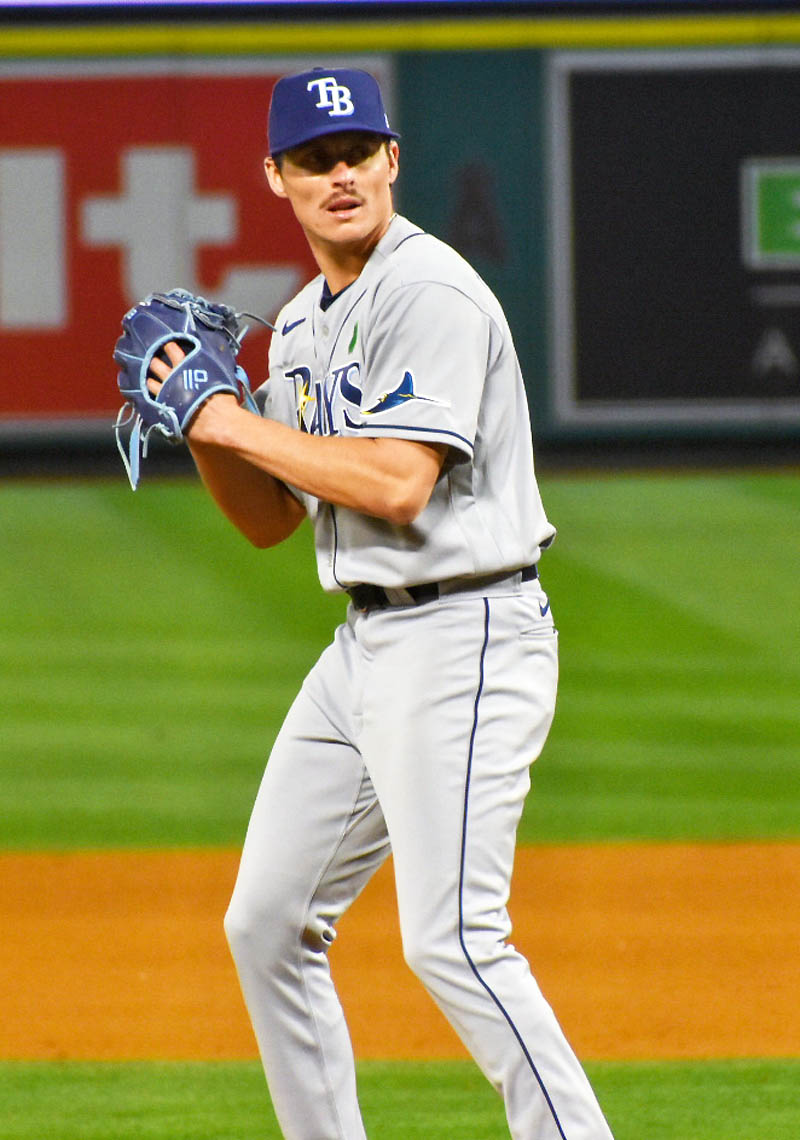 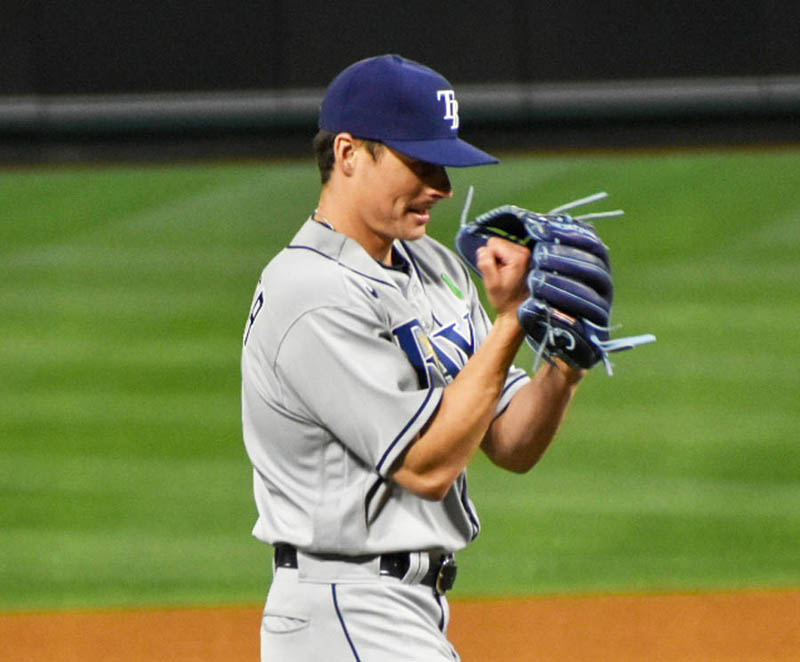 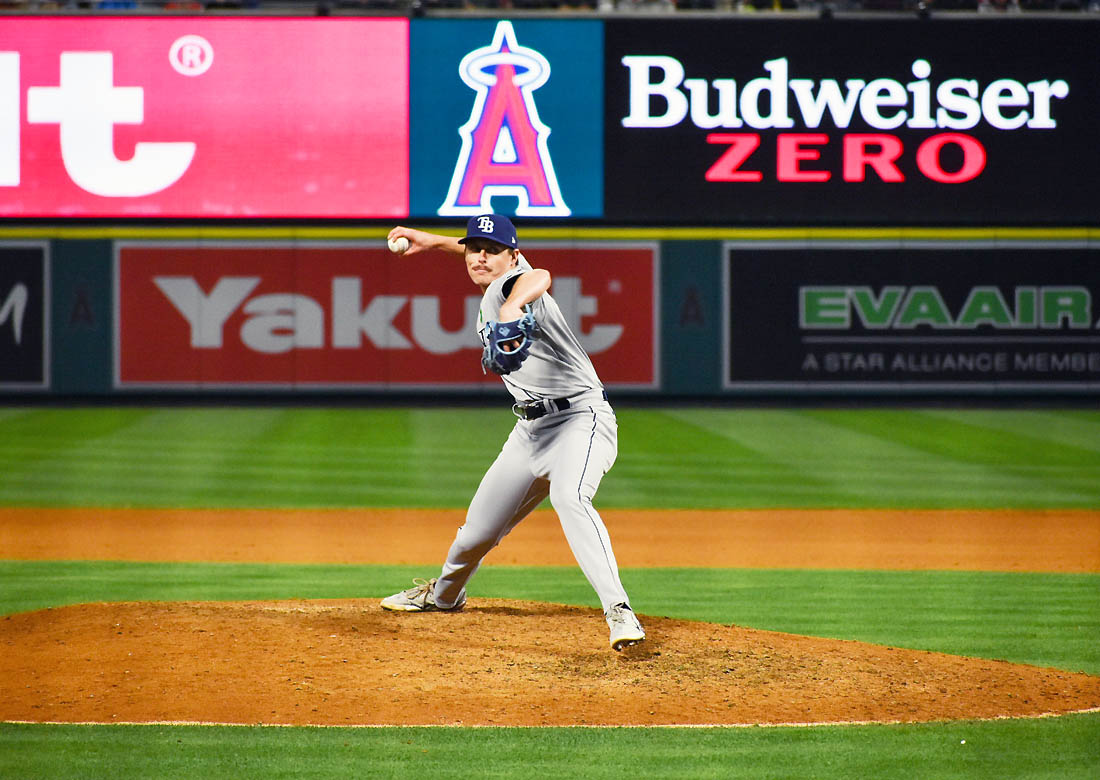 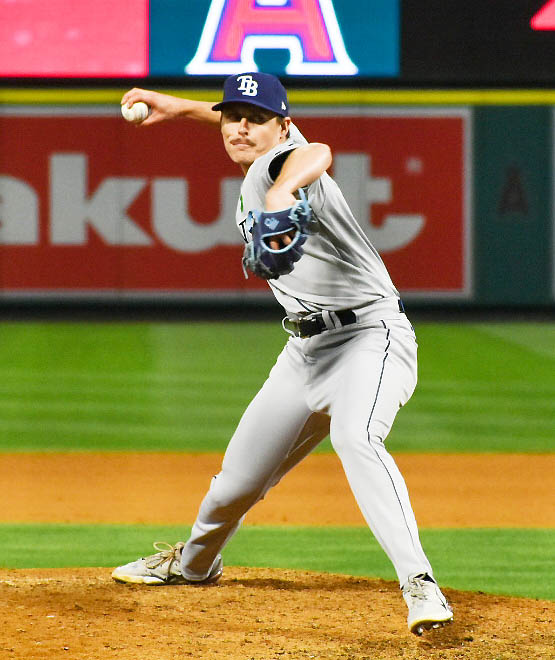 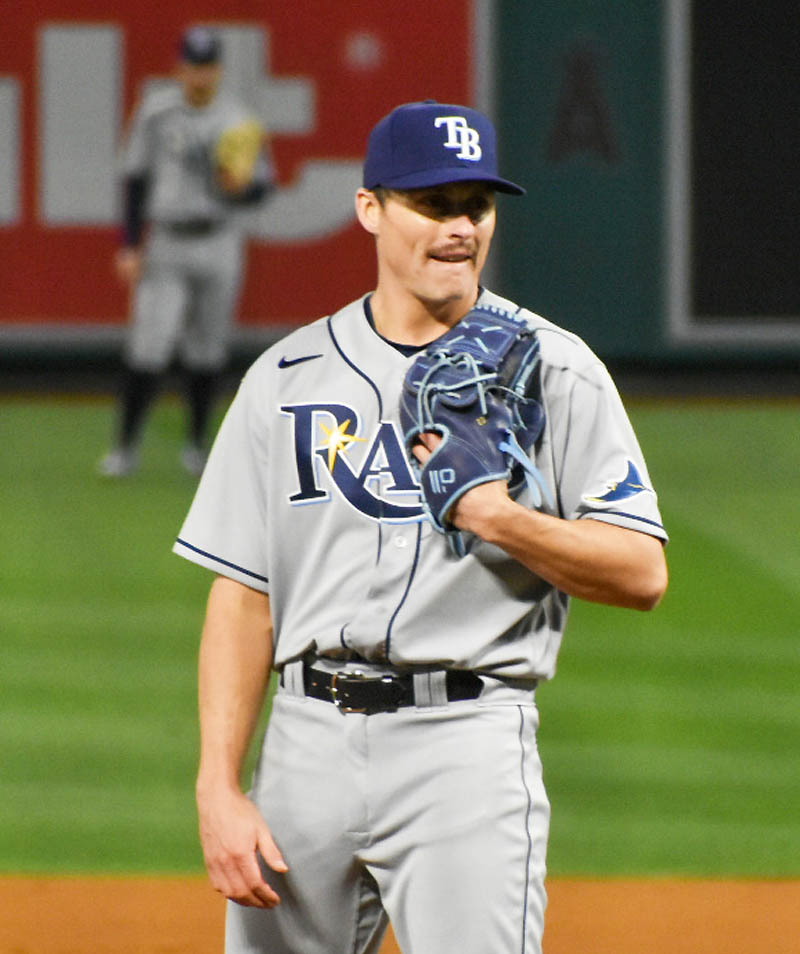