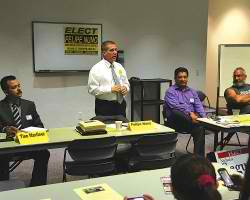 Candidates running for areas two and four of the Sweetwater Union High School District school board explained at a Tuesday night candidate forum how they would bring ethics, transparency and leadership to a school district tainted by corruption and marred in controversy.

Area two candidate Dana Toogood, a former math teacher in the district and a businesswoman, said the first steps for the district to move forward from the “black eye of corruption” lies with the voters.

“Please do not reelect the lawbreakers, they are not good role models and they’ve all had their chances,” Toogood said about ex-board members Bertha Lopez and Jim Cartmill.

Lopez and Cartmill were two of 18 defendants involved in what the San Diego County District Attorney’s Office called the largest corruption scandal in San Diego history.

Both former board members were sentenced to three years probation with community service hours and a $4,589 fine for accepting gifts above state limits.

A San Diego Superior Court judge ruled Lopez and Cartmill to be the “least culpable offenders” in the case and allowed the two to run for reelection.

Lopez, a candidate for area two, was absent from last night’s forum.

Toogood said she wants to refocus the district’s priorities on education.

She told the 20-member audience that as a board member she wants to improve college acceptance rates for students, find a way to give back to the district’s vocational schools, expand art education and get parents more involved in their child’s education.

Area two candidate Adrian Arancibia, a college professor, said he has an issue with the potentially new district headquarters being placed on the east side of Chula Vista.

“For me it’s important to keep in mind that we need to have access for all communities,” he said.

Arancibia said it would present a challenge for a parent to get from one end of town to the other.

Kevin O’Neill, a member of the district’s bond oversight committee and owner of a construction company, said unlike most of his opponents, he doesn’t have an educational background, which he said adds a new perspective on the school board.

“I think I will make a good board member because my training is construction and business,” he said.

“I understand contracts. And you can’t have all educators on the board because you need someone who knows where the chalk comes from.”

O’Neill said his business background would be vital in serving the school board.

“Teachers cringe when I say this but Sweetwater (district) is a business, a very big business.” “If you think about it, when school is in session, they operate the third largest bus transportation in the region. They feed more people than any of the fast food franchises in the region.”

Area four candidate and parent Tino Martinez, a relative newcomer to the political scene, said he wants to work to ease the tension between the community and the school board.

“I envision a district where we all feel not only encouraged but also respected by one another,” he said.

“ I would like to make it a positive environment for our children to learn well, our teachers to be appreciated for their hard work and, at the end of the day, I want all of us to feel proud of our schools.”

Toogood, and reaffirmed her consideration after hearing Toogood’s remarks.

Although, Perdue said, she was impressed by all of the candidates.

“I think the candidates pretty much are well-versed on the issues,” she said.

Area four candidate Derrick Roach did not attend the forum.