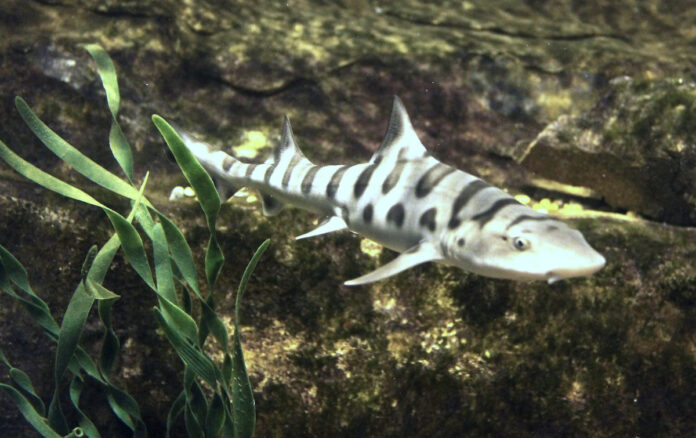 Now a pop-culture phenomenon, Shark Week is back, and the lovers of the history, education, and horror films of the ocean’s greatest predators are in high demand. But there is another way to learn about these many times misunderstood predatory fish of the sea by taking a visit to The Living Coast Discovery Center at the Chula Vista Bayfront. People might be surprised at what they can learn about the local sharks in local bays and oceans, right here along the San Diego coastline.

“Here at the Living Coast, we are a nonprofit organization that focuses on the need of animals that we have right here in our own backyard here in San Diego,” she said. “At the Living Coast you can see a few species of sharks, including leopard sharks, grey smooth-hound sharks, and horn sharks. Leopard sharks are the largest and probably the most common for people to see.”

Reissman said usually, many diving enthusiasts and snorkelers will head out to La Jolla Shores and the Marine Room, especially in the summer, as they are out there right now.

“Males and females will swim into this area to breed, and then later on in the season we will see females that are very close to shore, and they are pupping,” she said.

Reissman said that Leopard sharks can get up to about six feet in length and are known for their 14 to 16 saddles that go down their backs with a clear distinctive pattern. She said that they are a shy and somewhat elusive species, extremely calm and docile.

“Many people who are interested in seeing sharks up close head out into those waters and see them in somewhat of a close and intimate space, which is really cool and rare for many people when it comes to that type of animal interaction,” she said. “For those that are unable to do something like that, they can visit the ones we have here at the Living Coast as well. They can get a close look at the leopard sharks and are able to touch some of the horn sharks and grey smooth-hound sharks that we have in our ray touch pool area. They have a very rough texture to their skin. They have what is called dermal denticle skin, so they feel a little bit different than you might think. They are not slimy like the rest of the fish in the sea.”

Reissman said that the animals at Living Coast, many are rescues so most of its collection cannot be released back into the wild due to various injuries that they have had or some type of human interaction that prevents them to be able to survive on their own out in the wild.

“So, we focus on conservation through education,” she said. “The animals that we have here are a representative of their species, or an ambassador to their wild counterpart. People can come in and take a closer look at them. We are able to do other types of interpretive education and really spread the message about how we can protect not only the animals, but the habitats that we share with them. Sharks can be greatly affected by things like climate change and plastic pollution, so it is very important to us to connect audiences with these animals and having them here allows us to do exactly that.”

Fortunately for us, we are not on the menu for any species that are out in the ocean, said Reissman.

“They are rare to see and very special to see,” she said. “But, of course, it is something that you want to see from afar, unless you are experienced in water sports and activities. Safety is the first thing when going into the ocean, but it is also important to be aware of your surroundings and understand what is out there. There are many great programs to go out with guides in the area to learn more about the species and to interact with them in a safe environment for both you and for them.”

Reissman said Living Coast is slowly opening and encourages people to come to the Shark & Ray Experience through its interactive touch pool, and then view leopard, horn, and swell sharks in is 21,000-gallon exhibit with multiple underwater viewing areas. This exhibit also contains Living Coast’s only loggerhead sea turtle.

Living Coast is currently open weekends only, but on July 22, it will be opening its doors on Thursdays and Fridays as well. No reservations required. Guests can book a private event if they would like to visit Monday-Wednesday. Visiting guidelines are at www.thelivingcoast.org/visit.