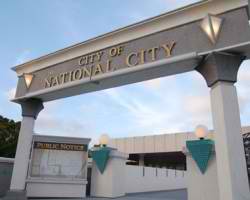 The National City Police Department has joined the growing list of law enforcement agencies throughout the county that have fully implemented the use of body-worn cameras.

Last month the National City Police Department rolled out body-worn cameras for its 52 uniformed officers to use during enforcement.

National City Police Chief Manuel Rodriguez said the cameras are part of an ongoing effort to build community trust and bring more transparency to the department.

However, Rodriguez said there are limitations to outfitting officers with cameras. He said because officers are now equipped with cameras, citizens automatically believe what they see on the footage.

“Some people think you capture everything on video,” he said.

“The one downside to it is that it doesn’t capture the whole scene many times, it captures parts. But it does give you some information that you otherwise wouldn’t have.”

Rodriguez said the department’s policy says officers do not have to inform the public they are being recorded with a body camera; he said if someone asks then officers must tell them.

The police chief said body cameras will help make policing better by capturing footage that could be used as evidence in criminal court.

The department entered into a five-year $90,000 contract with Taser for their cameras, storage capabilities and maintenance.

Taser cameras are the industry standard.

Camera footage is stored on a cloud-based system called Evidence.com.

In 2015, the Chula Vista Police Department outfitted its entire police force with Taser cameras. They also use Evidence.com to store their footage.

Other agencies in the county such as the Coronado and Escondido police departments have already fully implemented body cameras. Rodriguez said it took his department longer to adopt body cameras than the other agencies because he wanted to wait until the technology improved.

In researching cameras Rodriguez received feedback that cameras attached to officers’ glasses caused them to get headaches, which is one reason why Rodriguez chose to go with body-worn cameras.

Rodriguez added that the department did not consult with the American Civil Liberties Union or any other citizen rights groups when drafting body camera policy because he said their policy is similar to that of Chula Vista’s, which sought input from the ACLU.

In a statement, the ACLU said they support the use of body-worn cameras as long as they are being used appropriately.

“The ACLU of San Diego and Imperial counties supports police body cameras, provided they are used according to publicly-debated and approved policies that assure police accountability, create transparency, protect privacy and allow public access to video records,” the statement reads.

“Police body cameras can be an effective tool for deterring both officer and civilian misconduct.  Body camera videos can provide objective evidence to help resolve civilian complaints against police without significantly infringing on privacy.