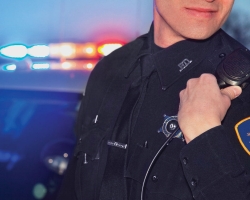 The National City Police Department was awarded a $150,000 grant from the California office of traffic safety through the national highway traffic safety administration to deter unsafe road behavior.

NCPD’s intent is “to stop the most unlawful and dangerous behaviors that put people at risk and create an environment where everyone feels safe traveling” but they focus on education, Ballardo said.

“Most of the time, except with a DUI situation, officers will give a warning or tell the driver what they were doing or should be doing. If they’re not receptive, maybe they issue a citation. In the big picture, we want people to be safe, not crashing into pedestrians or cyclists,” Ballardo said.

Often, the sergeant said, they receive resident emails about specific corners or areas that need attention but those areas change on a regular basis.

“When it comes to making it safer to walk and bike, that’s really a city engineering issue. They’re the ones who design all the bike lanes, green intersections, pretty much without the input of our police department,” Ballardo said.

However, the safety grant coincides with recent city efforts to promote walking and biking in conjunction with the city’s strategic plan.

National City Director of Public Works and City Engineer Roberto Yano said the city utilizes a safety analysis report program which aggregates accidents and traffic information from around the city and is based in part on NCPD accident reports.

“If we see an accident, it catches our attention but if we’re seeing multiple accidents somewhere, a systematic problem, then we start to question if there is something that could be improved,” Yano said.

In addition to gathering accident data and reacting to it, Yano said, the city also tries to anticipate where issues are going to pop up.

“On the planning side, we look at schools or high traffic areas or areas which we know will attract a lot of traffic and figure out how people are going to get there, what improvements will be needed. We try to get ahead of it through analysis before a store or business opens,” Yano said.

Yano said the city continues to “aggressively go after funding to bring in necessary money for improvements” and create safer transportation routes.

Ballardo said this marks the 16th year NCPD has received the safety grant.