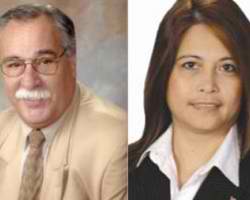 “It’s very easy to talk about what you’re going to do, I have a record of having done things,” Aguilar said.

The 64-year-old Democrat said public safety should be the city’s first priority for public service.

“What is very clear is that in the next term, our resources are going to diminish … the most important thing (is) to preserve safe streets,” she said.

She cited an overabundance of housing in Chula Vista and not enough public safety.

“In order to correct that imbalance we need to bring quality, clean jobs to Chula Vista,” she said.

She said she wants to strategically position Chula Vista as a regional center for clean industries, such as health care and the biotech industry, making Chula Vista the health care hub for South County.

“Small businesses are America’s number one source of jobs,” Aguilar said. “Chula Vista has an untapped wealth of small businesses … we must help them thrive.”

“I’ve been talking to people all over the city and what I hear over and over again is that there’s too much red tape involved with anything.”

Aguilar said she will vote against Prop. H, a measure that taxes Internet communications and cell phone use.

“This is a time when people are hurting (financially),” Aguilar said. “Chula Vista is ground zero for foreclosures.”

Allowing medical marijuana dispensaries is a complicated issue for Aguilar.

“In principle it makes sense to be able to control it since it’s happening anyway,” she said. “On the other hand, some dispensaries in San Diego have created problems … if we are going to have these dispensaries, we need to have very, very strict regulations surrounding them. The other advantage is that we can tax it,” she said.

Republican Larry Breitfelder said that even though he came out on top in June’s primary election, it doesn’t mean he is popular.

“At some point you have to decide if you’re going to be the people’s representative or the union’s representative,” Breitfelder said. “I’ve decided that my first priority is representing (residents), not the host of special interests. I’ve made that choice and I’m willing to live with the consequences.”

Breitfelder’s priorities include open decision-making, increasing prosperity and the resulting tax base by streamlining regulation for local businesses; holding the line on taxes and attracting companies.

He said top issues facing the city are without a doubt pensions and overtime.

“We’ve kind of taken a Band-Aid approach to this from the beginning,” he said. “We have to get to a much more fundamental solution to the problem. It boils down to getting control on spending – you have to make sure that obligations for pay and pensions are stable,” Breitfelder said.

Breitfelder, president of the Chula Vista Taxpayers Association, said he is opposed to Prop. H.

“…Half of it is good, it modernizes an old ordinance,” he said. “The bad part is it’s done in such a way that is very unfortunate (it increases taxes),” explaining that the ballot language is still not clear.

“The bottom line is unless we can do this in a pharmacy-like environment, we shouldn’t do it at all,” he said. “It has to be done responsibly from places that won’t degrade our communities.

Lopez said he wants a safe and secure quality of life for residents, while maintaining the city financially solvent. He proposes a reduction in spending and enticing and promoting businesses in National City.

The non-profit director said it will take time for the city to see improvements.

“As a city we will have to do more with less. Working together with Chamber of Commerce to promote existing businesses and the use of the enterprise zone to entice businesses and provide incentives to boost economic growth is essential,” he said.

“Redevelopment can provide funding for city improvements and attract new businesses that, in turn, create more jobs which will provide more resources to families, while maintaining a traditional approach to community characteristics,” Lopez added.

As a member of the National City Council, Natividad would promote economic development and support local small businesses. Generating new sources of revenue is integral to avoiding city lay-offs, service cutbacks and a reduction in library hours.

Natividad, a former National City councilman, considers himself an effective communicator who speaks his mind.

Once he is in office, Natividad said the city will need to eliminate wasteful spending, freeze new hires except public safety -and appoint an existing staff person to look into and suggest ways to reduce unnecessary expenditures, such as conserving energy in city buildings, recycling and other costs that add to the city budget.

He would also consider leasing or selling city-owned property to create new revenues.

Mona Rios said that if elected she would actively court the cooperation of local businesses.

“I would take immediate steps to work with the business community, residents, council members and city staff to set policy that will create an environment in National City to attract good jobs,” she said.

Providing adequate funding for public safety services will be a top priority for the retired National City library worker.

Rios said National City must have a high-level of fiscal accountability.

“Before we ever consider cuts to services, we need to make sure we are spending taxpayer money effectively and efficiently. I would work with city staff and residents to identify cost savings that wouldn’t adversely impact residents. ”

Ditas Yamane said the city’s top priorities should be economic growth by way of new jobs , creating relationships with local, national and international investors, developers, and companies including the largest employer in National City .

She also wants to see the city foster stronger relationships with local schools and administrators.

Yamane said the key to establishing fiscal stability is by employing prudent spending practices tied to a realistic municipal budget.