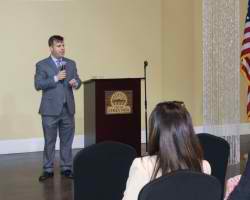 Chula Vista Councilman John McCann delivered a State of the District address in front of about 100 people at The Venue at Eastlake.

However, none of these projects are in McCann’s district. The Olympic Training Center is in District 3 as is the Millenia development. The bayfront development is on the west side of the city.

About the Olympic Training Center, McCann said with the city as sole owner of the facility it makes the center more open and involved with the community. He also said with Point Loma Trust as the operators there is no risk to the city’s general fund.

McCann called the $4 million Millenia project a “mini Silicon Valley of the south.”

Millenia is looking to attract high-tech companies and innovative companies which will help with the economic growth of the city, he said.

“We in Chula Vista are in the center of a mega economic development district,” McCann said. “We look at what’s happening in San Diego and you look south of the border with what is going on in Tijuana. We are right in the center and there is so much economic activity that we have to make sure we are involved in it, in being able to maximize our resources.”

In discussing the east side, McCann said quality hotels are finally coming east of Interstate 805. He said a Marriot Hotel, located north of Otay Ranch Town Center, is supposed to open by the end of the year.

McCann said the city has lost credibility by not having a hotel because when prospective businesses come to the city they are staying in Mission Valley or downtown San Diego.

He said bringing in more hotels will add more revenue for the city through the transit occupancy tax which could help buy a new fire station.

When it comes to the bayfront, McCann said community and business leaders have to set their differences aside to get the decades-old project done.

“This should be a project that all Chula Vistans should be for,” he said.

And we need to be able to compromise and work together because pettiness is going to delay the bayfront for another 10, 20 years and we need to unite and come together.” 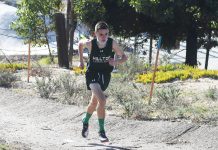