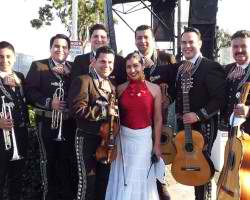 As Serafin Paredes began to teach in San Diego Unified School District more than 15 years ago, he gradually came up with an idea of working with world-renowned mariachi musicians to help teach and inspire his students.

So Paredes decided to build a mariachi conference from scratch, with music instruction and workshops for students.

The first conference was held at San Diego High School with just his own students in attendance. It quickly grew.

Trying to keep up with growth during the recent economic recession, Paredes decided to partner with the National City Chamber of Commerce about four years ago in order to keep attracting more students and more high profile mariachis to teach the workshops.

“It’s like anything else. The biggest challenge is raising the money,” Paredes said. By partnering with the chamber Paredes was able to continue growing the mariachi workshop program as a partner of the National City Mariachi Festival and Competition.

The festival attracts top mariachi performers and students from all over the southern United States and Mexico and is a key part of Paredes’ goal of bringing culturally relevant music programs to schools with large Latino student populations.

“Because culturally our families are so united, there are multiple generations, and when we get together we listen to what our grandmas or the older generations listen to,” said Paredes, who is originally from Hidalgo, Mexico. “So whether they like it or not, these students grow up listening to mariachi. And some of them, they end up loving that music.”

While Paredes grew up hearing mariachi, he did not begin to play until he was already an adult, though he played cumbias and classical guitar since high school.

He didn’t discover mariachi as a musician until he became a teacher.

Paredes has been hosting the mariachi workshop conference for 12 years now and the event continues grow.

Hosted at San Diego State University where Paredes is now a music instructor and director of the school’s mariachi ensemble, the workshop conference includes educational opportunities, competitions and a Friday night showcase for young musicians. The top four student mariachis from the showcase get to perform in the concert opener of the festival this weekend.

“Being able to see these kids playing the mariachi music, learning the culture, learning everything that has to do with this beautiful music and culture,” Paredes said, “when I saw that, that opened up a new world for me.”

The festival is expected to attract as many as 15,000 visitors which in turn attracts top mariachi acts and allows Paredes to fulfill his dream of putting students into a classroom environment with world-class mariachi.