The San Diego Padres’ Petco Park remains a field of dreams not only for Major League Baseball talent but for baseball players of every age locally.

The same cascade of “oooooohs” and “aaaaaahs” played out again during Sunday’s fourth annual Padres’ High School All-Star Night at the downtown venue.

Not all 42,445 seats were filled for the East versus West format, but the adrenaline was definitely pumping for the — in many cases, once in a lifetime — showcase opportunity.
San Diego Section Commissioner Joe Heinz addressed both teams before the game with the same message.

“Enjoy the experience and make the most of it,” he told players and coaches.

There was certainly no lack of thrills as the teams combined for 13 runs in the regulation nine-inning game, won 7-6 by the East all-stars.

“To be around these elite athletes is a thrill,” Westlund said. “You’re going to see some of them someday wearing a Major League Baseball uniform. It’s also nice to have some of your best friends help coach the teams. You don’t get an opportunity like this every day, so I feel blessed.”

“It was awesome to coach this group,” said Holland, whose team finished 8-4 in Grossmont Hills League play as the runner-up team en route to advancing two rounds in the Open Division playoffs with a final 16-12 record. “We had a great time with the kids. We’re thankful to Bill Johnston (Padres vice president of community relations) for putting this on. It’s such a class act. I’m grateful to have this experience.” 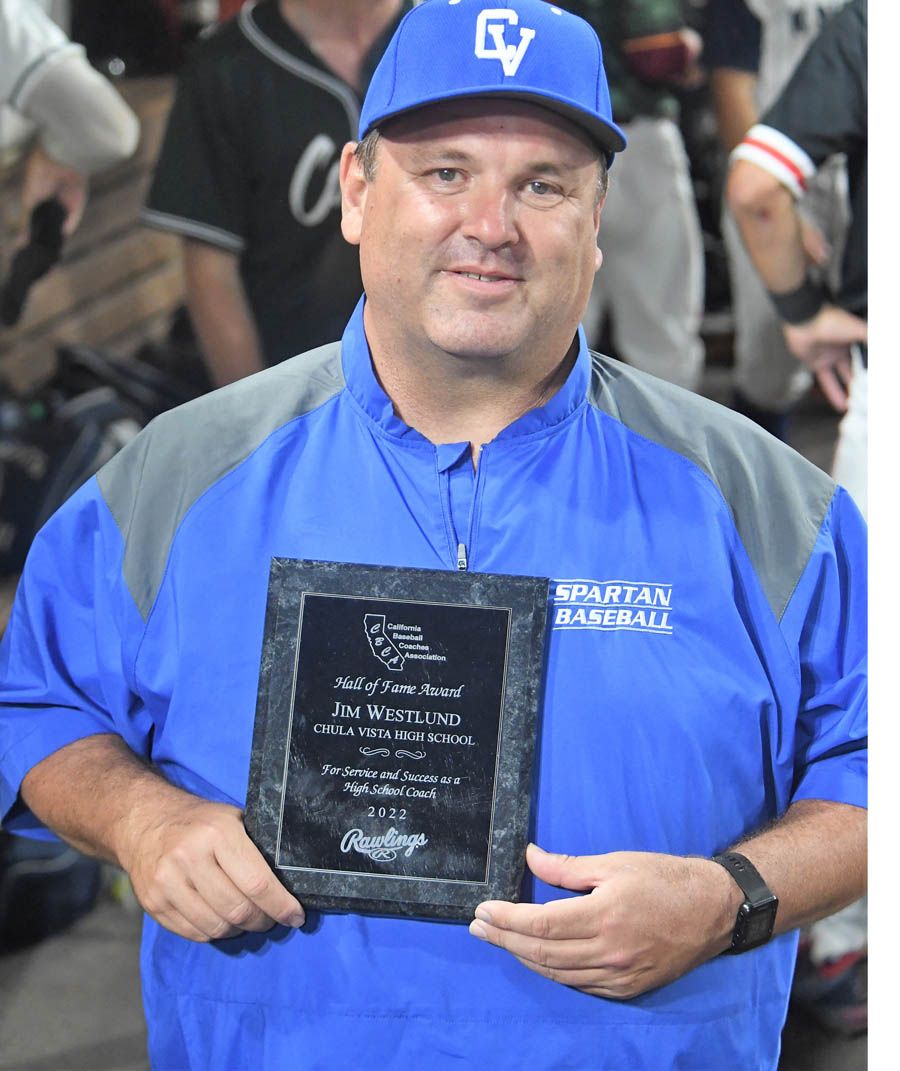 Westlund had the additional honor of recently receiving the California Baseball Coaches Association Hall of Fame award for success on the field and efforts off the field as well.

“Only 12 San Diego coaches have been honored over the years — it started back in the 1980’s —and it is an association for all California state baseball coaches,” Westlund said. “I am lucky to be mentioned in such elite company.

“Manny Hermosillo (Montgomery), John Baumgarten (Hilltop) and Dave Gonzalez (Eastlake) are previous Hall of Fame members. It is an absolute honor to be included in that company and to have your lifetime body of work and sacrifice recognized is truly humbling.

“I am thankful to have such a supportive high school administrative team and many talented and hard-working student-athletes over the years. It is their efforts that keep me energized and excited about the future of South Bay baseball.”

Eight South County players participated in Sunday’s all-star game — two each from Montgomery, Bonita Vista and Eastlake high schools and one each from Olympian and High Tech High Chua Vista.

Hermosillo said it was an honor to be selected as an assistant coach for this year’s West all-star team along with his son.

“It was an honor to have been chosen by coach Westlund along with coach Lovato from Madison — very good friends and longtime coaches,” the elder Hermosillo said.

“The fact that Herrera and Mendoza were chosen, made it even more meaningful. Great kids who had great season at their positions.

“We never have a chance to meet these exceptional players because they are always opponents. They are tremendous human beings with great futures down the line.” 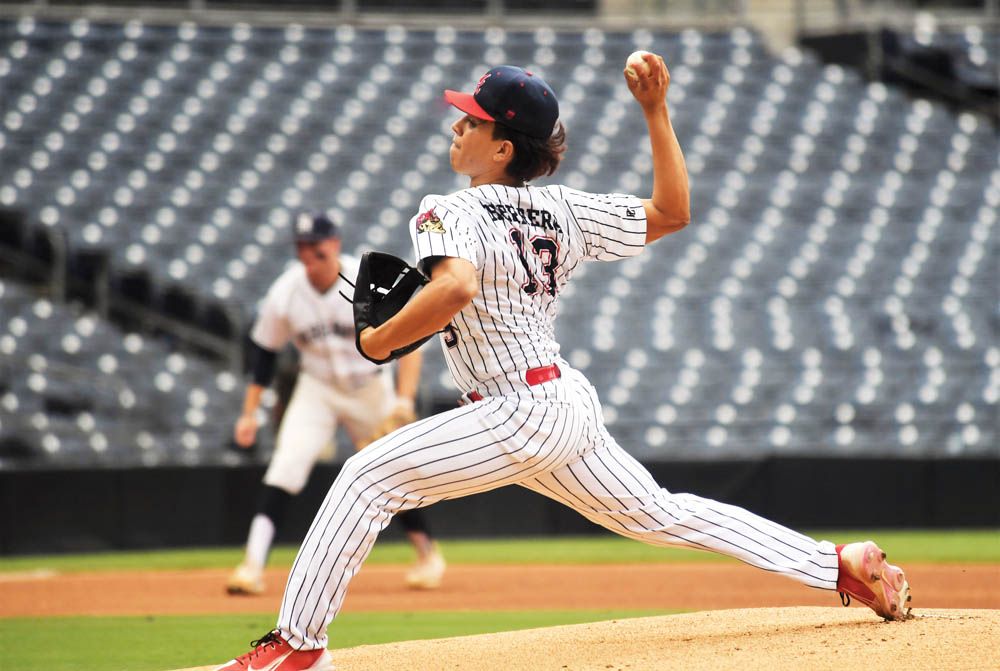 Hermosillo ended the season with 740 career victories. “More importantly it was a team accomplishment,” he said. “Mesa League champs and making it to Division II CIF finals. It was a tremendous experience for my players; something to build on and to get motivated for the upcoming season.”

This season ended Sunday for area ball-players who participated in the Padres’ all-star game.

But the memories will last a while.

“It’s a dream come true, just a super treat to be here,” said Huggins, who forged a 4-4 record and 3.68 earned-run average with 83 strikeouts in 64.2 innings during the 2022 season as the Barons qualified for the Division I playoffs. “Just playing in this atmosphere is definitely exciting.”

Huggins got to showcase his determination and fortitude by working out of a bases-loaded jam in the bottom of the fifth inning when he struck out Mission Hills senior Jackson Waller for the third out.

“It’s an amazing opportunity to play on one of the best ballparks in the world,” Bleisch added. “I’ll definitely remember this.” 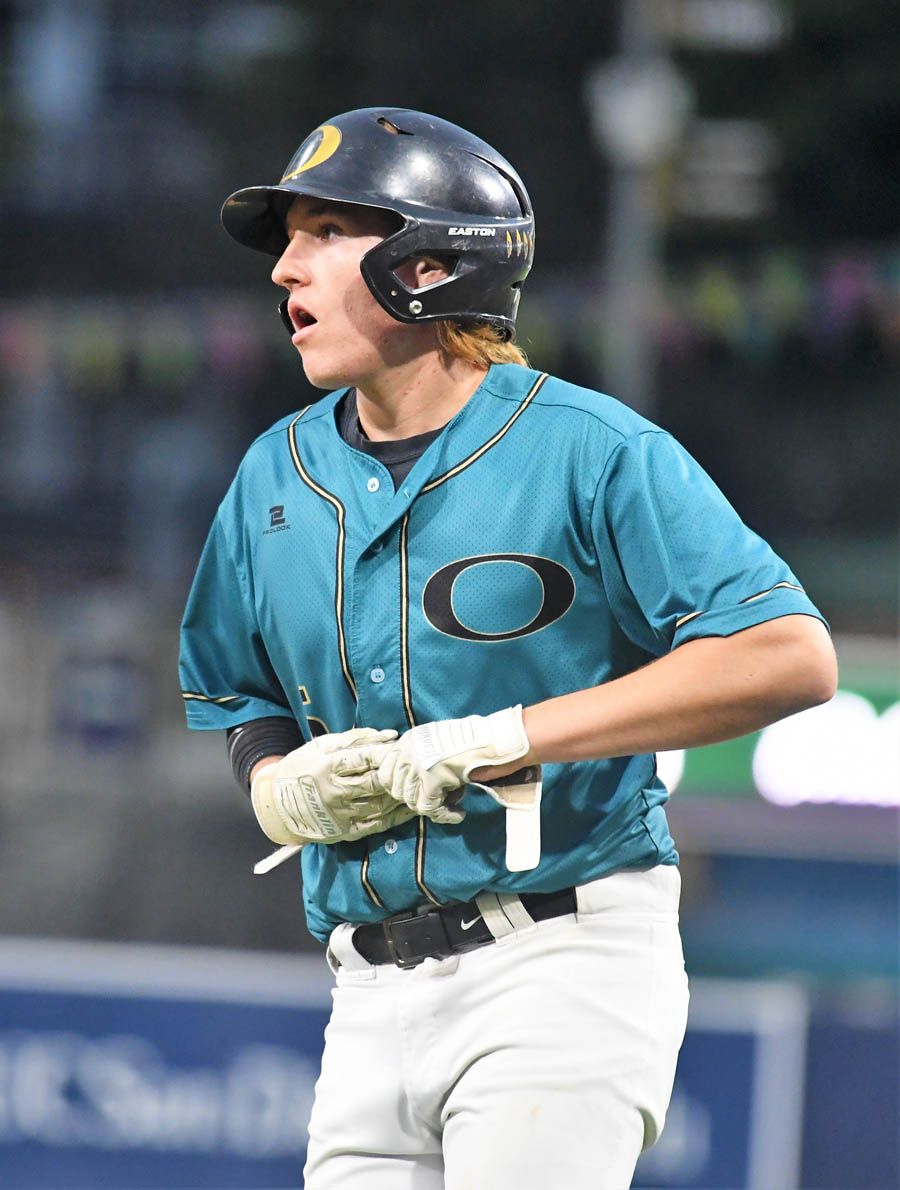 “That was exciting,” he said. “We came up short (in the championship game) but it was a great experience.”

Mendoza hit 0.316 in 28 games with 16 RBI, eight doubles and two home runs as the Aztecs captured the Metro-Mesa League championship with a 9-3 record before finishing 22-8 with a runner-up finish in the Division II playoffs.

The Aztecs appeared in five playoff games, going 3-2, with a 2-0 finals loss to Canyon Crest Academy.

Herrera posted a 7-1 record (0.875 winning percentage), 0.48 earned-run average with 81 strikeouts in 73 innings. He notched a clutch 2-0 shutout win over Del Norte to help his team advance to the championship game.

He started Sunday’s all-star game, retiring the West in order 1-2-3 in the top of the first inning.

Lane (0.388 hitting average, 27 runs scored, 18 RBI and two home runs) and Martinez (7-2 pitching record, 1.32 ERA and 61 strikeouts in 58.1 innings) both helped the Titans to Division I championship glory this season.
Lane reached base twice in Sunday’s game on a walk and base hit, scoring once.

Most Valuable
Granite Hills High School junior shortstop Camden Sos earned honors as the game’s Most Valuable Player with a two-run scoring triple in the seventh inning to help secure the victory for the East team.

“It was amazing to win the game and win the MVP trophy,” said Sos, an Alpine resident who has committed to continue his baseball career at UC San Diego. “There were a lot of good players here, so this means everything.”

Sos was a member of the Eagles’ top-seeded Open Division team that went on to secure a runner-up finish in the divisional playoffs and earn a berth in the ensuing Southern California regional playoffs. 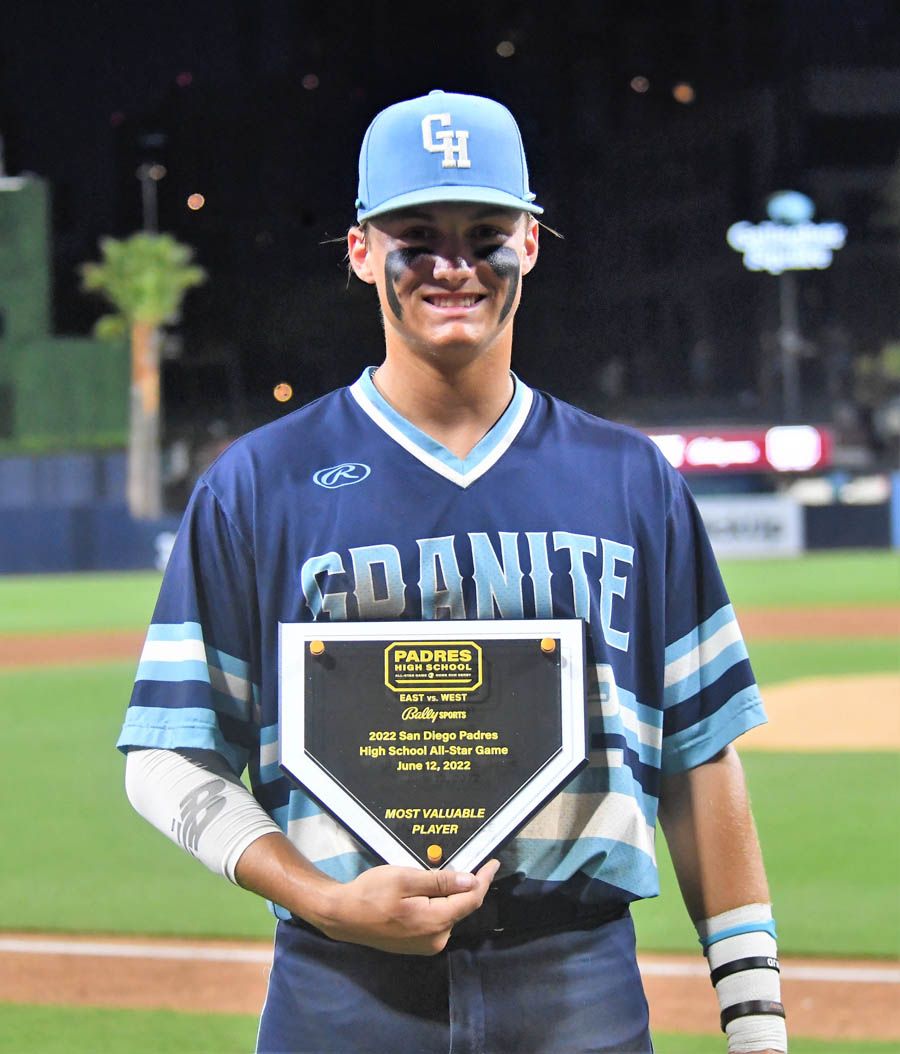 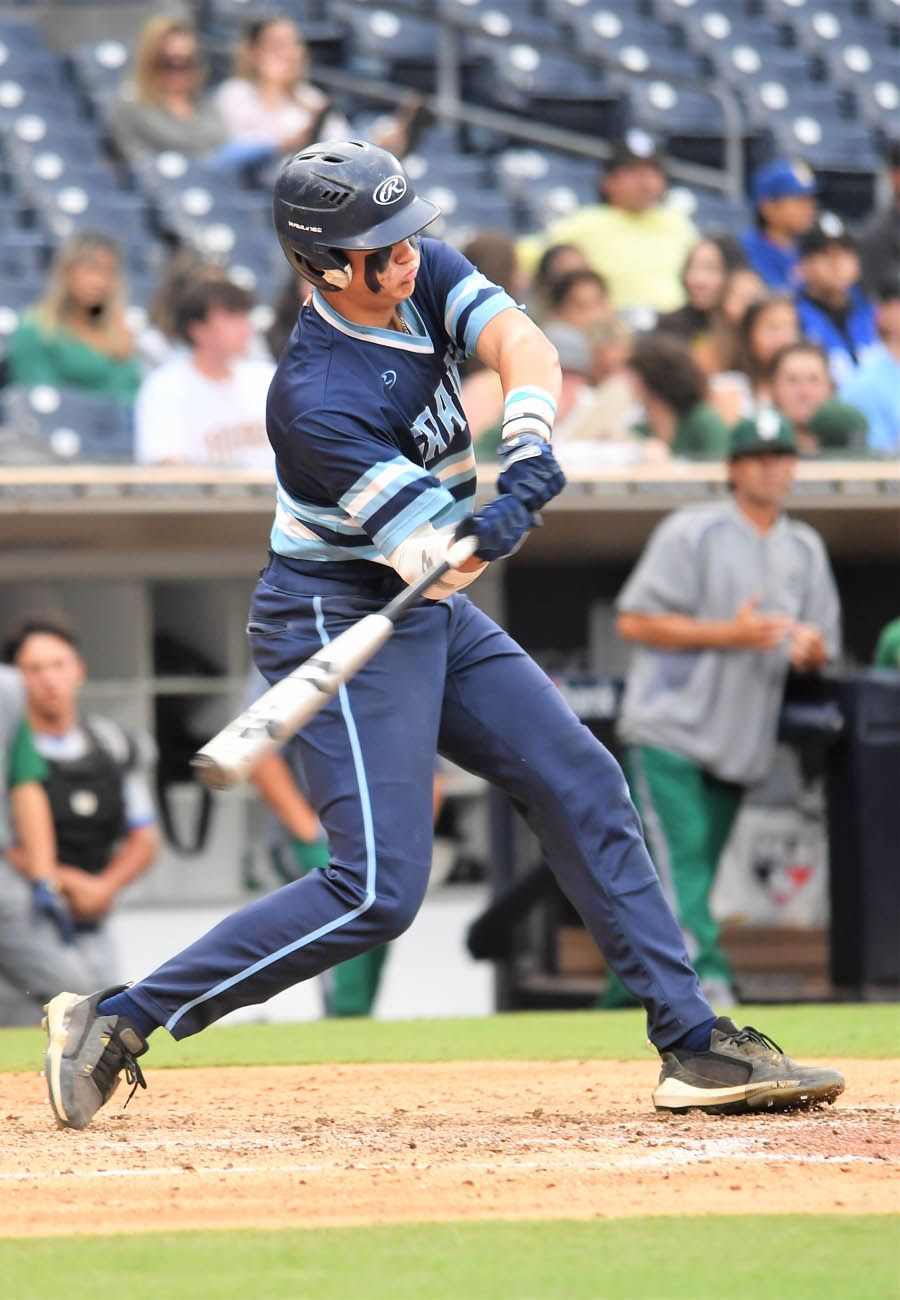 “Everyone gave everything,” Sos said in retrospect. “There was no pressure on us being the No. 1 seed. We had the mentality to go out and win every game.”

“It was an honor to be out here,” Sos said in regard to his all-star selection. “It’s a whole different experience with the stadium being enclosed and everything around you. It’s one of the best in the country, it’s amazing. But once you’re in the batter’s box, it’s like anything else.”

Macias, Sos, Whitman, Reber and Diaz were among the league’s all-league second team selections while Alto and Tomasello were honorable mention picks.

“We had good pitching on both teams, the offense just had to catch up to get it going.” Holland said. “I thought we did a good job of that.”

Macias had one RBI in Sunday’s game while Tomasello pitched 1.2 innings.

Wright batted 0.432 in 27 games with 26 runs scored, 25 RBI and 11 stolen bases. He had a productive night on Sunday with a single, two stolen bases and one run scored.

Major, who has a career 1.64 ERA with 206 strikeouts in 149.1 innings with the Patriots (22-9 this season), recorded one RBI at the plate and put down the West in order in the bottom of the ninth inning, striking out the final batter to cap Sunday’s festivities. 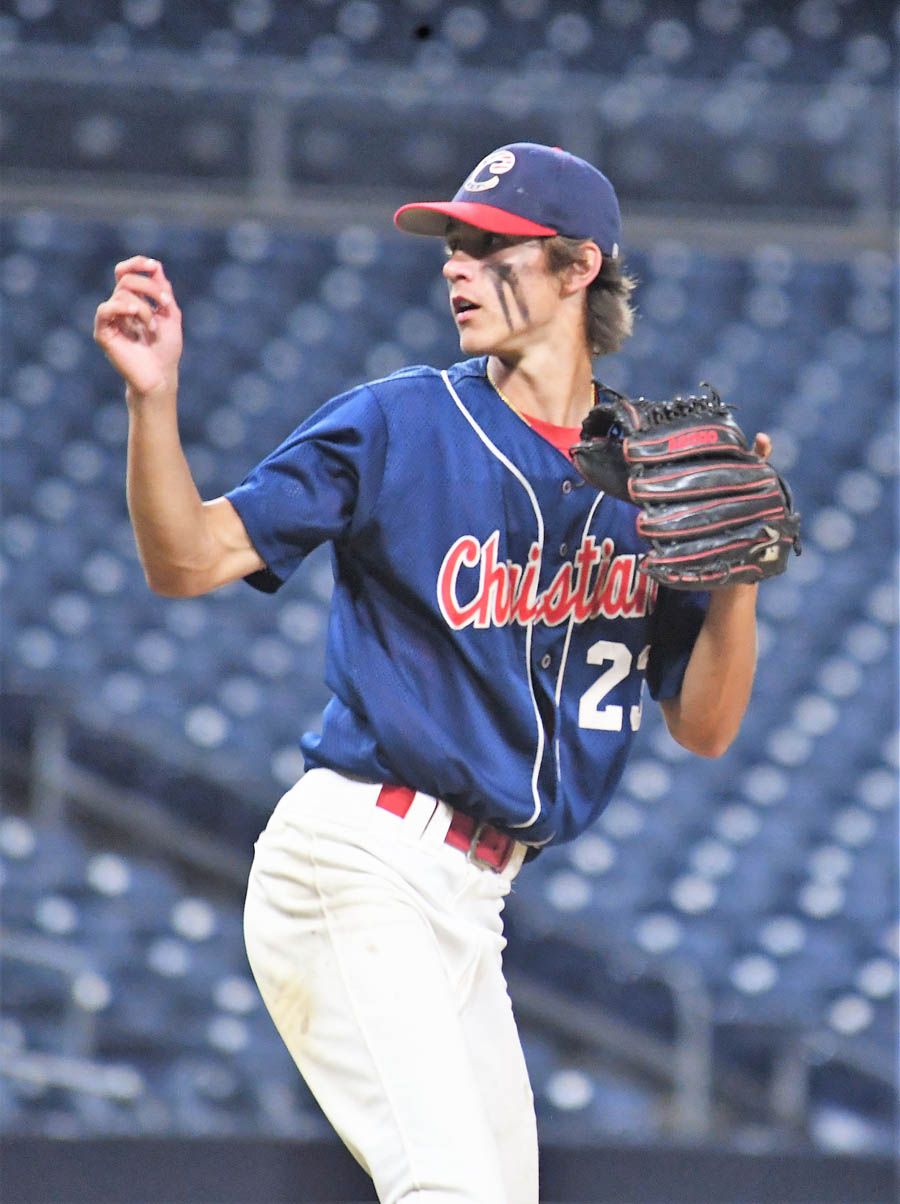 Haar pitched 1.1 innings on Sunday, helping the East team get out of a jam in the bottom of the seventh inning after narrowing the score to 7-4.

“It’s amazing to be among these premier players here, a once in a lifetime experience,” said Haar, who led the Highlanders with a 0.368 hitting average in 25 games, topping the team with 26 runs scored, 28 hits, 36 RBI and eight home runs.

Haar will continue his baseball career at the University of San Diego, which posted a 37-20 record this spring, won the West Coast Conference tournament and advanced to the NCAA Corvallis Regional.

“We battled,” Haar said of the Scotties’ 2022 season. “At one point we were tied for 17th in Division I and came back to earn the eighth seed in the Open Division. It was a great senior season to be with my boys.” 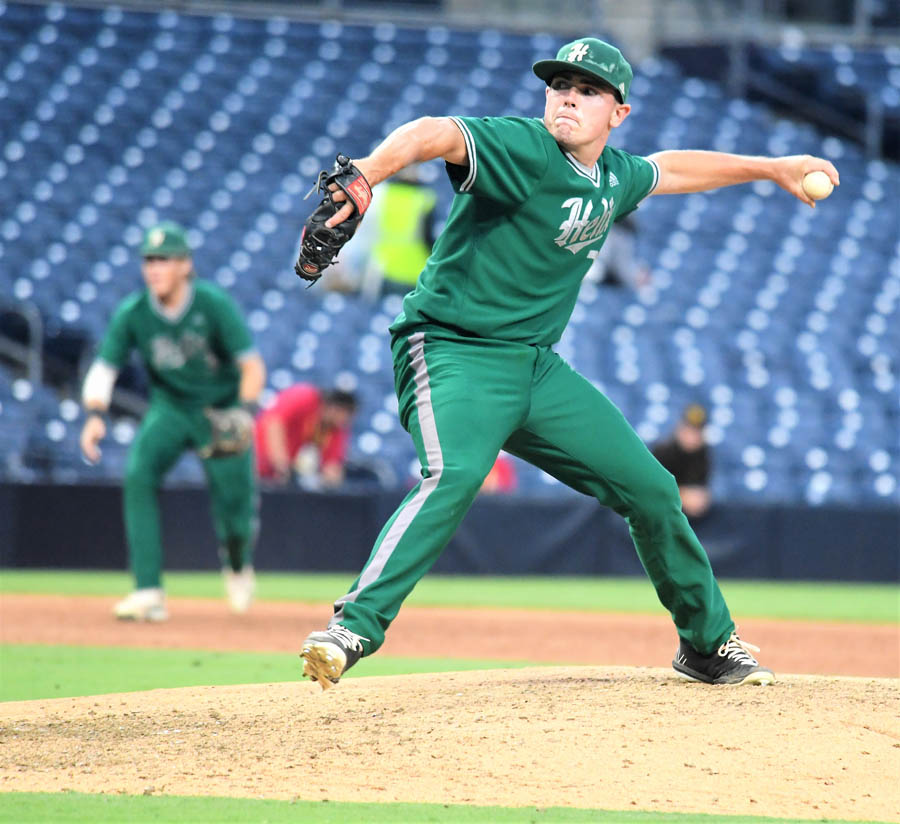 Whitman had a RBI single in Sunday’s game while Laub started on the hill for the West with one scoreless inning. 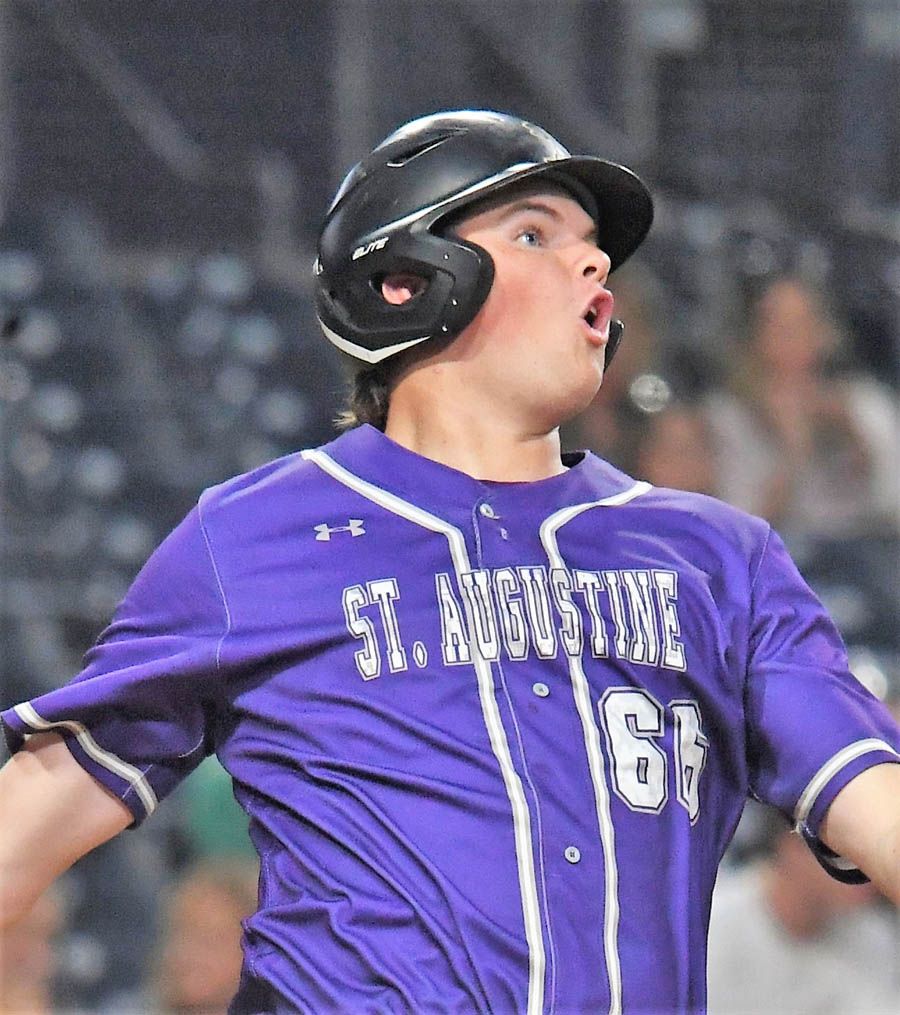 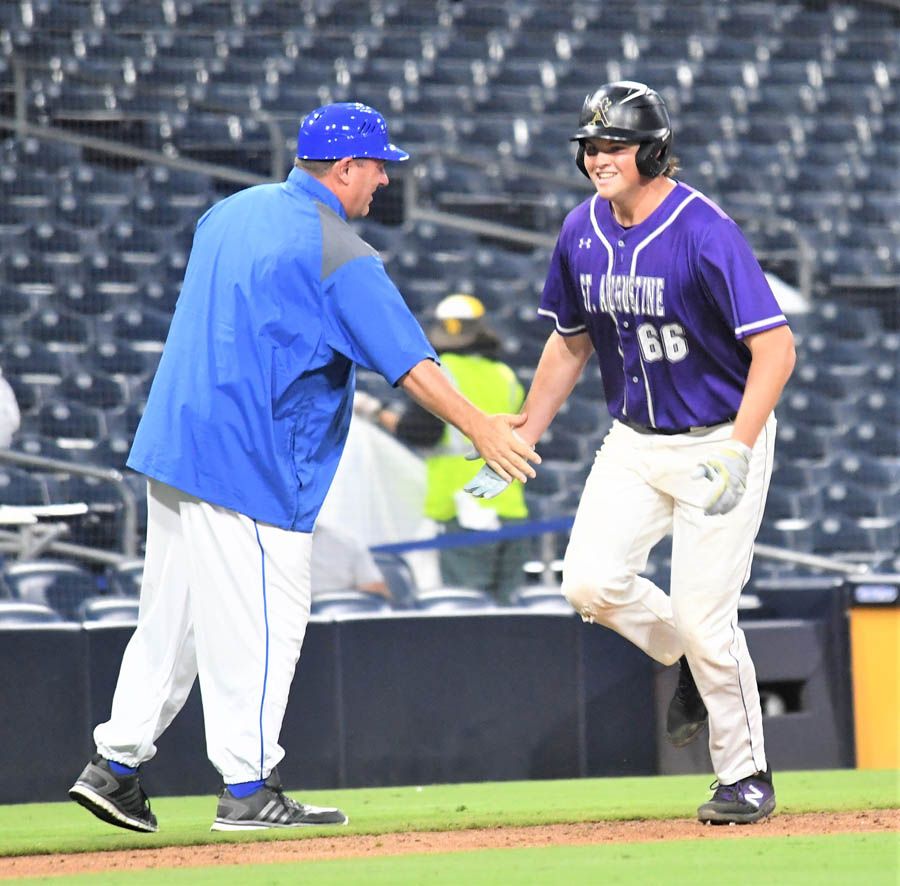 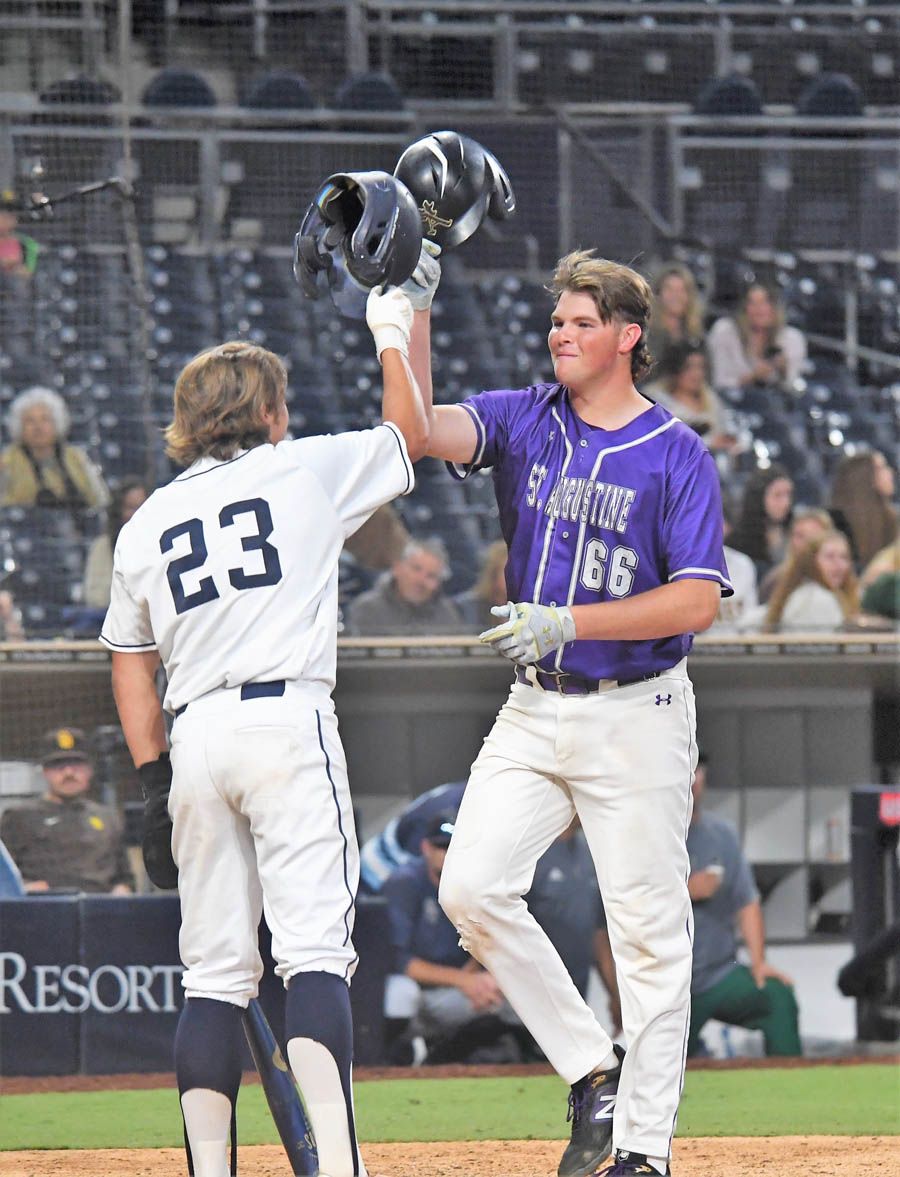 Each team had four players selected with the top two point-getters from the first round squaring off in the final.

Haley chalked up 34 points to Cook’s 24 points to win this year’s derby.
Grossmont’s Diaz De Leon and Helix’s Whitman both participated on the four-man East roster.

Cook had a double and RBI in the regulation contest.

The San Diego State University baseball team ended its season not in the College World Series but with a rather uncharacteristic 18-38 record that included a 10-20 showing in Mountain West Conference play and an altogether dismal 8-25 home record.

But the Aztecs still had their moments.

Melton, who garnered the Aztecs’ seventh Pitcher of the Year accolades since the conference’s formation in 2000, finished the season with a 5-2 record, 2.07 earned-run average and 67 strikeouts in 65.1 innings. He posted four of his five wins in conference play, leading the conference with a 2.40 ERA while ranking second in strikeouts (62), third in opposing batting average (0.246) and fourth in innings pitched (56.1).

Weems, a Las Vegas native, becomes SDSU’s third freshman of the year honoree. He started 40 of 46 games in the outfield, ranked fourth on the team with a 0.293 hitting average, third in runs scored, fourth with 71 RBI while eight doubles and five home runs. He stole 17 bases in 21 attempts (second on the team).

Fondtain ranked second on the team with a 0.339 hitting average while starting 25 of 28 games with eight doubles, two home runs and 11 RBI.

Ruiz ranked third on the team with a 0.309 hitting average. He notched a team-high 43 runs scored, 14 doubles, one triple, five home runs and 33 RBI.

Leonhardt posted a 0.246 hitting average while scoring 26 runs, adding seven doubles, five home runs and 34 RBI to his resume. He also appeared in four games on the mound with a 0-2 win-loss record, 10.57 ERA and 10 strikeouts in 7.2 innings.

Ingrassia, a sophomore pitcher, appeared in five games with a 0-0 win-loss record, 8.53 earned-run average and eight strikeouts in 6.1 innings.

The conference championship was the first for the Falcons and the program’s first NCAA postseason appearance since 1969.