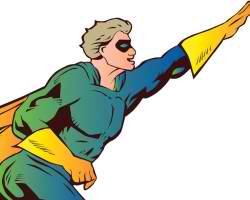 South Bay comic book sellers expect a small jump in sales this week as a sold-out Comic-Con 2017 sends local fans who do not have tickets into their neighborhood shops.

“My sales are actually a lot better during Comic-Con,” said Ed Sandburg, owner of Comics-N-Stuff, in a phone interview. Comics-N-Stuff is a small chain of local comic shops founded in National City with stores in Chula Vista and Otay Mesa.

Sales used to drop in Sandburg’s stores in the early years of Comic-Con because customers were buying at the convention. Now it has grown so big and sells out so quickly, Sandburg says local fans don’t go to Comic-Con as much as they used to.

The convention is expected to draw more than 130 thousand attendees to San Diego this year.

“So instead of going to Comic-Con our regular customers will stop by our stores and they’ll go downtown to hang out and people watch,” he said. “And it brings a lot of out of town visitors into the stores.”

While Comic-Con might create a mid-year sales spike for San Diego County comic shops, there is a downside, Sandberg said.

“Comic-Con is good for the city and for the industry, but now it’s not that good for the fans and small collectors who started it,” said Sandburg. “Now you have Marvel and the conglomerates taking 20 booths and there’re the movies in the big mega booths, and they’re taking up all the smaller spaces.”

Comics-N-Stuff hosts a seller’s booth at Comic-Con every year and Sandburg has been attending since the mid-1970s when it was a just a small convention of comic book collectors and sellers in a hotel exposition hall.

“It’s too big for the small guy now,” Sandburg said. “If you’re an individual that used to go there with your collection to sell and trade, you can’t do that anymore.”

It is the passion of collectors and fans that keeps shops like Sandburg’s open in the age of online shopping when major book retailers like Barnes & Noble have been forced out of brick and mortar storefronts.  Sandberg said comic collectors and fans want their books in pristine condition and comics purchased through Amazon and other sites are often delivered damaged.

“We still have hardcore collectors and we try to find the hard-to-find stuff for them,” he said.  “We also do a lot of the collectibles and action figures. It’s a one stop shop. We have everything from little Hot Wheels to life-sized Yodas.”

While the “hardcore collectors” are more likely to attend more intimate comic book conventions like the Phoenix Comicon and WonderCon in Anaheim, South Bay comic fans still head to downtown San Diego or to their local comic shop to absorb the buzz that Comic-Con creates, Sandburg said.