It is the first conference award for Browning, a Lakeside native and West Hills High School alumnus.

Browning kicked a career-long 50-yard field goal, was successful on two point-after-touchdown conversions and punted nine times for 364 yards (40.4 average) with a long of 56 yards to turn in yet another stellar performance.

Six of his punts landed inside the Toledo 20-yard line, including three inside the 10-yard line. He also averaged 64.2 yards on four kick-offs.

The Aztecs didn’t fare much better in the offensive department with an almost non-existent passing game that had fans booing the SDSU offense starting late in the second quarter.

The Aztecs scored the only touchdown in the first half on a 43-yard breakaway run by Jordan Byrd. Browning extended the lead to 10-0 with his career-long field goal with 12 second remaining in the third quarter.

The lack of offensive production caught up with the hosts when the Rockets scored back-to-back touchdowns in the fourth quarter to slip ahead, 14-10, on the scoreboard. 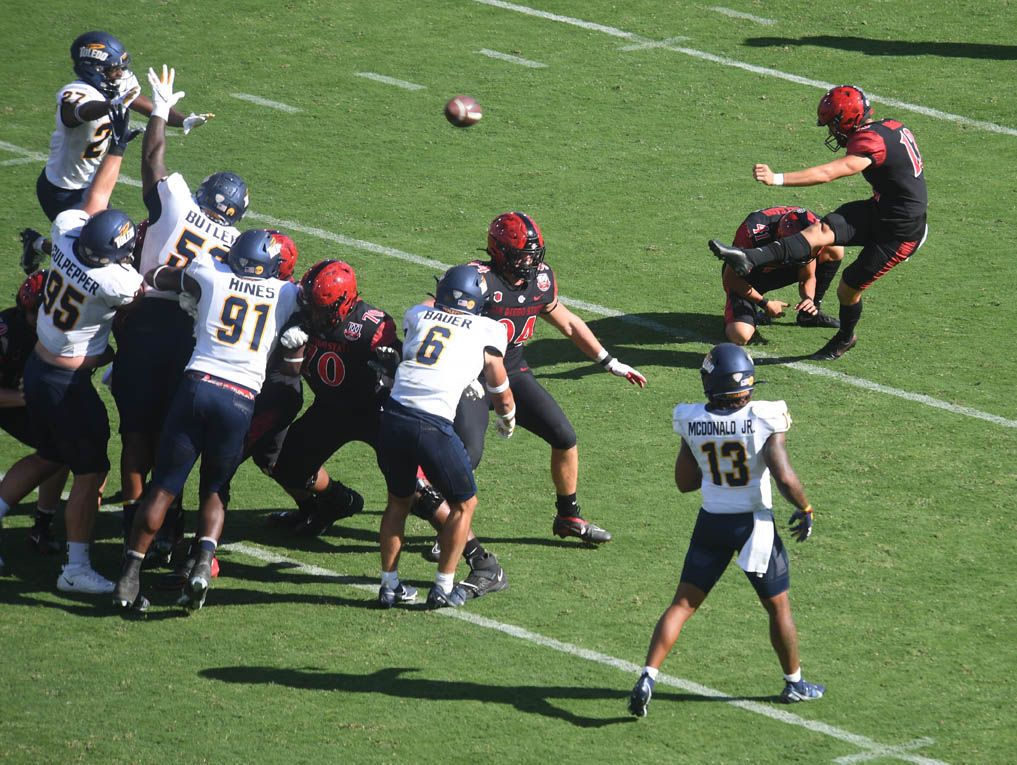 The Aztecs were fortunate to receive decent field position on what proved to be their final drive of the game. The offense under starting quarterback Braxton Burmeister finally began making plays in advancing the ball down the field.

A 15-yard scamper by the SDSU signal-caller, in fact, moved the ball all the way down to the Toledo one-yard line.

The Aztecs scored on the next play as Byrd basically walked into the end zone with 41 remaining on the clock.

Suddenly, the jeers turned to cheers.

Browning tacked on the PAT for good measure.

The Aztecs sewed up the win when Caden McDonald made an interception on Toledo’s first play on its ensuing possession.

“When you look at the game, we played really hard,” SDSU head coach Brady Hoke said. “We competed hard, our guys stayed in there together. Defensively, we were able to get a stop early, but then at the end, they got in the end zone, and the offense came alive. We did some really good things in the last two minutes.

“Are there things we need to do better? No question. And we will do that. The big drive at the end when we needed it by the offense was nice to see. But we have to generate that earlier in one way or another. We have to continue to work on throwing the ball. That’s something that we will continue to do as we get ready for league play.

“Every day we go out there, we improve on the defensive side of it, and that toughness gets better.”

On the season, Browning ranks second on the team in scoring with 22 points behind Byrd’s 24 points. Tyrell Shavers is third with 12 points.

Browning is currently on a roll. He has made all four of his field goal attempts and all 10 PATs, while kicking off 17 times for a 65.1 average and 13 touchbacks.

A former walk-on, Browning received a scholarship after Sunday’s practice.

“We are very proud of Jack,” West Hills head coach Casey Ash said. “He comes from a great family who is still heavily involved in our football program. Jack was a great high school athlete, but the characteristic that helped him earn a spot as a Division I athlete was his perseverance.  He bet on himself every step along the way and came up aces.”

Hilltop grad David Delgado has been the holder on all of Browning’s successful place-kicks so far.

The former Highlander logged five tackles (four unassisted), one sack, one tackle for a loss and one pass break-up in the team’s 35-7 loss at No. 14 Utah the previous week.

Shawcroft leads Aztec defenders with 29 tackles, including 17 unassisted tackles and 12 assists. He has been active with 3.5 tackles for a loss (21 yards), two sacks (17 yards), three pass break-ups and four quarterback hits.

For fans watching the games, he never seems to stop. His motor is always running.

Burmeister has completed 34 of 64 passing attempts for 230 yards with two touchdowns and two interceptions and an 87.38 quarterback rating. His averaging 57.5 passing yards per game. His longest completion has been for just 16 yards.

Burmeister completed 13 of 24 passes for 65 yards with one interception and one sack while rushing eight times for 44 net yards.

Byrd carried the ball 16 times for 115 net yards with two touchdowns. Former Madison standout Kenan Christon had five carries for 31 yards, including one bolt for 27 yards.

“Braxton started slow, but as the game went on, he gained confidence,” Hoke said. “When he gets himself involved a little bit in the game, starts to scramble, and makes some plays down the field, his confidence grows. As a head coach, you don’t want him getting hurt, but at the same time, he loves the contact.”

“It’s football, no one plays a perfect game,” McDonald said. “You just have to put plays behind you. Everyone’s going to make a bad play. You just got to go to the next one. That’s the glory about football.”