In 1963 more than 200,000 people from across the country gathered in the nation’s capitol and particpated in The March on Washington. It was in the waning days of summer when a quarter of a million people heard Dr. Martin Luther King deliver his “I Have a Dream” speech in person. Millions more across the country and the world would hear it on television and radio broadcasts.

A few years later thousands of people participated in the Selma to Montgomery March in Alabama, an effort to register black voters who were systematically disenfranchised and oppressed by local, state and federal government.

At the end of the 1960s, hundreds of thousands of Americans again gathered in Washington D.C. This time an estimated 500,000 people had come together in November 1969 to voice their opposition to the Vietnam War.

In the ’80s hundreds of thousands gathered in New York City’s Central Park to denounce the proliferation of nuclear weapons, the ’90s saw masses of people gather, march and protest for gay and lesbian rights, and in the early 2000s there were protests across the country against the first Iraq war and in favor of immigrants’ rights.

Last year Washington D.C. once more attracted hundreds of thousands of people, this time during the Women’s March, an action advocating for a variety of human rights. In the city of San Diego, between 30,000 and 40,000 from throughout the county — including Assemblywoman Lorena Gonzalez and National City City Councilwoman Alejandra Sotelo Solis — participated in that call to action and awareness.

This country’s and the world’s history is peppered with instances in which people have united in a common cause: a thirst for equality, justice and civility, and a demand to be heard by those with power. A majority of those gatherings were non-violent.
To those who disagreed with the rallying cries and the elected leaders who did not appreciate their authority and wisdom being challenged, the protestors were subversive. Troublemakers.

In today’s parlance the mayors and council people of those cities might call the people who descended on their municipalities outside agitators. Paid protestors. They might dismiss them as people who do not live in the communities they march in and are around only to stir the pot.

Over the last few months a comparatively small number of peaceful protestors have gathered at National City City Hall during council meetings. They have interrupted proceedings while demanding attention for a man they contend was killed in police custody. Police arrested some of those protestors.

Some have dismissed the protestors as people who don’t live in the community so their concern must not be genuine.

The focus should not be on residency. The focus, instead, should be on the words written by Martin Luther King Jr. during the civil rights movement.

“Injustice anywhere is a threat to justice everywhere.”

It’s not the address that is important. It is the message: People want to be heard and heeded. 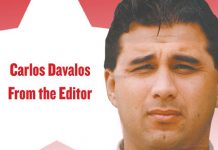