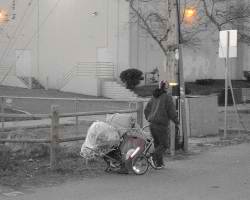 Volunteers have ventured out into darkness one night each year across San Diego county since 2009 to gather data and tally how many unsheltered homeless individuals they encounter during a single point-in-time count. Skipped in 2021 due to the COVID-19 pandemic, the We All Count Point in Time Count is back on the calendar this year, scheduled for Jan 27.

Each time the count is held, dozens of volunteers go out in teams and physically count the number of unsheltered homeless individuals they encounter in the middle of the night on assigned census blocks. Holding that in-person count isolates those statistics from sheltered homeless individuals such as those staying in transitional housing or temporary living facilities.

Mandated by the U.S. Department of Housing and Urban Development, the annual count can be used for comparison between neighborhoods, broken down into county versus city statistics, and provide a snapshot of the homeless population in different regions of the county and other subsets of information.

Although the PITC is an unfunded, federally mandated requirement that has to be conducted every two years, San Diego has historically chosen to conduct a homeless count on an annual basis.

To put the unsheltered count in perspective, out of 7,658 total homeless across San Diego county reported in 2020, 3,971 persons or over 50% of all homeless in the region were counted as unsheltered.

Regional Task Force on the Homeless Chief Executive Officer Tamera Kohler said the agency could still collect accurate numbers on sheltered and unsheltered individuals in 2021 by leaning on information that outreach workers collect every day in shelters, transitional housing and day centers among other social service programs. However, what could not be gathered without going out in person was “the human story” about the individuals behind the numbers.

“The count tells the public: this is not about a group of homeless people, this is about individuals who have had a loss of housing. There are veterans but are they male or female? There are people with disabilities, there are families— there’s every experience out there and we try to collect it and organize it,” Kohler said.

SBCS Communications Director Mindy Wright said the agency, formerly known as South Bay Community Services and now working across the county has “staff on the ground working to serve people experiencing homelessness year-round who have built trusting relationships with these folks” and might be able to obtain more details about individual situations during the annual count.

Wright also said the PITC count has potential to bring increased public focus to the homeless population and provides an opportunity for area residents to listen to and learn from their unsheltered neighbors.

Homelessness, she said, is characterized by extreme poverty coupled with the lack of stable housing and that poverty is not just evident in chronic homeless living on the street.

“There are children who go to school hungry, families living in cars or a friend’s garage, and teens couch surfing so they don’t have to sleep in a park. Then there are many others who are just one circumstance away from losing shelter and means for basic living,” Wright said.

“Often a homeless situation occurs due to one unforeseen circumstance, like a death in the family, a health issue or loss of a job,” Wright said.

There’s a conversation that happens with a first engagement, Koher said, asking people if they have any family or friends, or anywhere safe to go.

“First time homelessness is really prevention through a rapid resolution, funding helps with that,” Kohler said.

In 2020, 473 homeless individuals were counted across the South Bay and South San Diego communities, contributing to 6.3% of the region’s population, Wright said.