The Pacific Coast Athletic Conference held its first swim and dive championship meet since 2019 last weekend at Southwestern College. It was a triumphant return to the pool for many swimmers who had their 2020 season cut short by the Coronavirus shutdown.

In all, two full seasons were lost to the COVID-19 pandemic.

“It was exciting to get back into the pool, back into swimming,” Grossmont College men’s head coach Anhton Tran said. “But it’s been rough coming back from a long time off.

“We set goals for this year and the swimmers are right on those. We’ve had big drops throughout the season.”

“It was good to see a lot of hard work pay off,” Southwestern College head coach Matt Usataszewski said. “We had a water polo season in the fall but no full swim season since 2019. It was tough, but we’re definitely getting back to where we were after missing two full seasons.”

Despite lower numbers, it was a competitive meet thanks to the rules that govern community college swimming. At the community college level, swimmers can compete in as many as seven events over the course of a championship meet — three individual events and four relays.

Teams were thus able to stretch their talent across the board to pile up points.

Southwestern College finished third in the men’s field with 417 points while San Diego Mesa was fourth with 311 points and Crafton Hills was fifth with 190 points.

Heber, a 2019 graduate of Mar Vista High School, summed up the three school records as “pretty good for a water polo player.”

“I feel really accomplished,” he said. “I feel proud of myself. I know my coaches are proud of me. It feels really good to get my name in the school record book.”

“Bryce was an absolute pleasure to coach,” SWC’s Ustaszewski said. “He’s a great student, a great water polo player and obviously a great swimmer. He represented our school with pride.”

“I feel like the 100 is the true water polo race,” the 2019 Mar Vista High School grad said. “It’s good to know I’m the fastest in San Diego County in community college.”

The rematch in the 100 freestyle was key as Godin was aiming for his third individual gold medal. Heber had set a new school record in the morning prelims and bettered that in the finals with a time of 46.42 to out-touch Godin by a scant 0.34 second.

Heber said he couldn’t keep track of the competition during the 100 freestyle race. “I had horse-blinders on,” the SWC swimmer said. “It was a great feeling to look at the scoreboard at the end and see that I was in first place.”

Heber could take his act to a larger stage when bids are handed out for the state championship meet May 5-7 at East Los Angeles College.

The top five place-finishers in each race at the PCAC finals received medals.

Osthimer entered the 100 backstroke as the top seed from the prelims while Botte was seeded second. But both Jaguars were out-stroked by Grossmont’s Carlos Lazarr (West Hills), who won in 57.83 — four seconds ahead of Osthimer and six seconds ahead of Botte (third, 1:03.61).

“I just gave it my all,” Lazarr said. “Coach said to do the 100 back because we needed another person in the event, and I said okay. My specialty is the butterfly but, after winning this, I don’t know now.”

Osthimer set PR marks in both backstroke events. “I’m definitely happy with my backstroke times,” he said. “I could have gone faster in the 500. I think I might have won the 100 backstroke but I hit the lane line twice.”

“Swimming was always more of a background sport to water polo for me, however, this year I enjoyed swimming a lot more than I ever have,” he said. “Watching my times drop as much as they did was very exciting for me and kept me going. I have always pretty much done the 200 IM, so getting a medal in that was very cool for me.

“Swimming at community college was definitely tougher than high school, but it came with its perks. The practices are harder, meets contain harder events, and the meets happen a lot quicker. However, the very nice facilities and luxuries available to us like trainers made me feel a lot more involved and pushed me to be my best.” 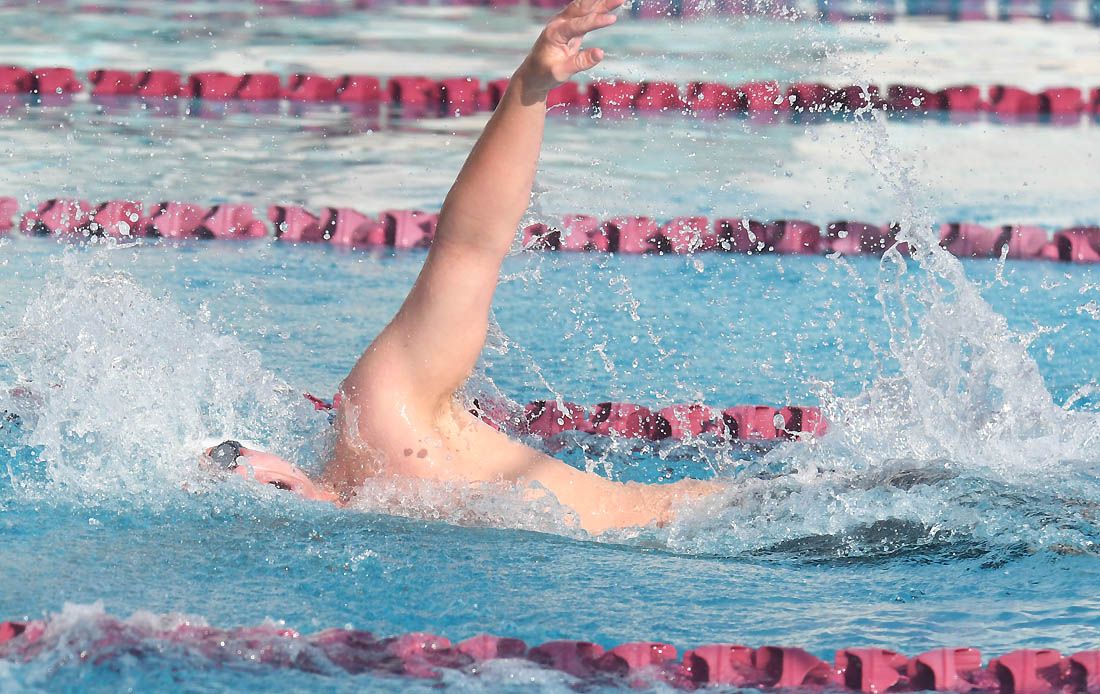 On the women’s side, the quartet of Lauryn Rockwell (Mar Vista), Tess Johnson (Eastlake), Emily Torriz (Eastlake) and Sofia Bravo (Mount Miguel) totaled 224 points over the three days of competition.

Of note, Rockwell was fourth in the 200 freestyle (2:18.67) and seventh in the 100 freestyle (1:02.96).“I thought Southwestern did an admirable job,” Ustaszewski said. “We only had three swimmers back from the 2020 season that was cut short. We had a lot of young swimmers this year proving themselves. Everyone dropped times from top to bottom.”

Age is only a frame of mind, it seems.

Cottrell, 64, was the oldest swimmer to compete at the finals and was loudly cheered on by his SWC teammates.

The state championship meet is May 5-7 at East Los Angeles College. 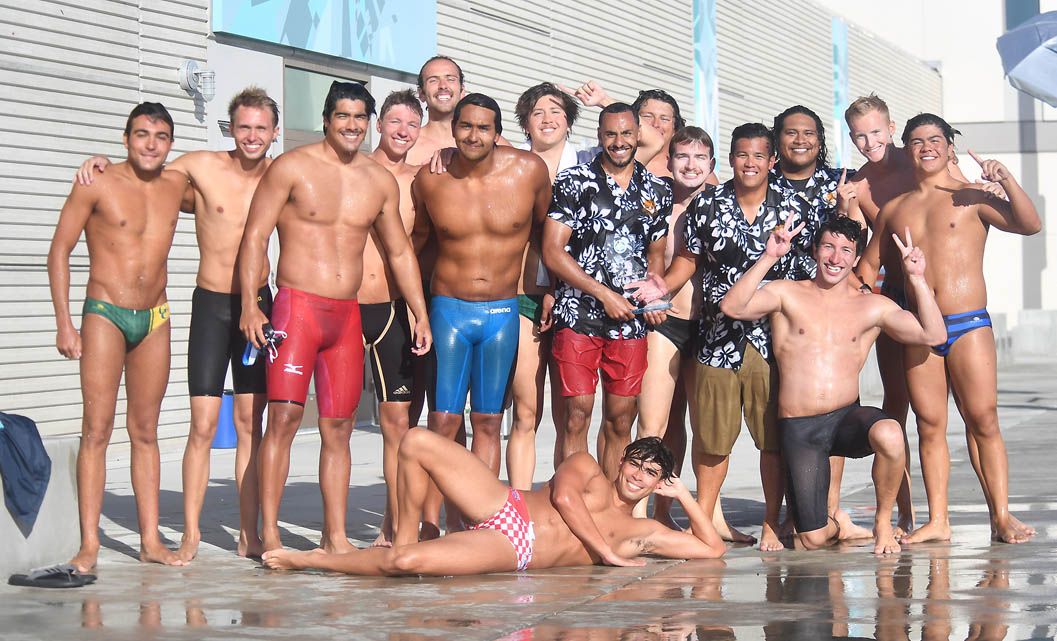 Eastern exposure
While Palomar College recorded first-place finishes in 11 of the 20 men’s events to Grossmont’s six event championships, the Griffins prevailed by numbers.

“A lot of depth was the difference,” Tran said. “We had multiple swimmers in the championship finals.”

Individual event champions for the Griffins included Camarillo in the 200 individual medley (1:59.10), Lazarr in the 100 backstroke and Jacob Nelson (Ramona) in the three-meter diving competition (203 points). 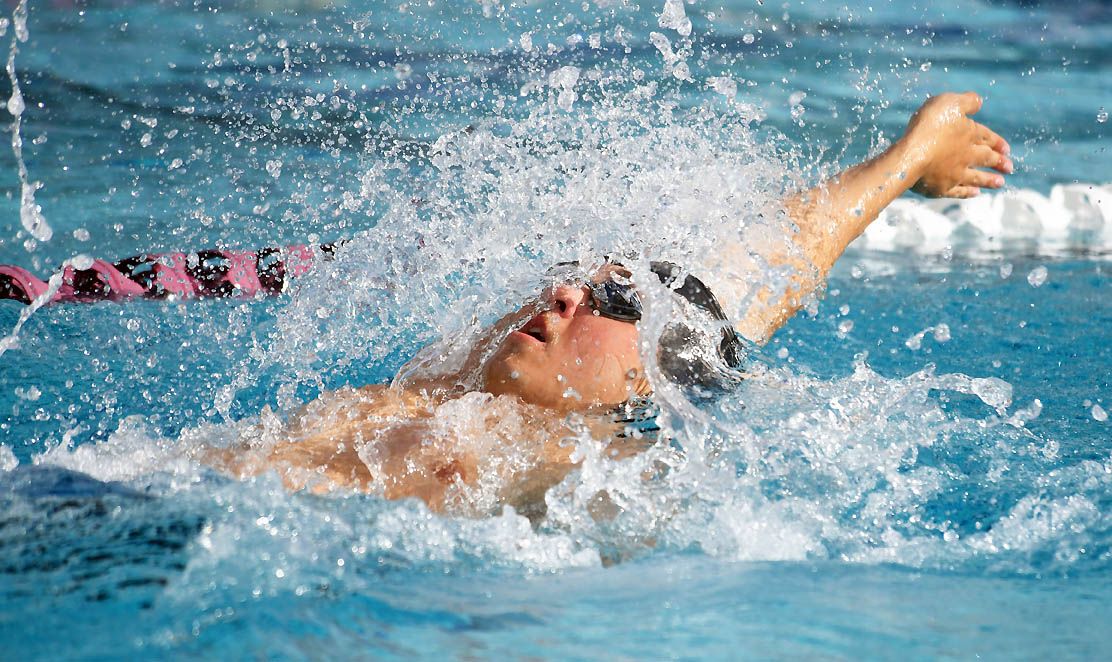 “It was great finish,” Tran said. “We won all the freestyle relays and they won all the medley relays. They were catching up to us in points, so we knew it could come down to the final race.”

The 1650 freestyle race is the marathon event in the conference finals consisting of 66 laps. 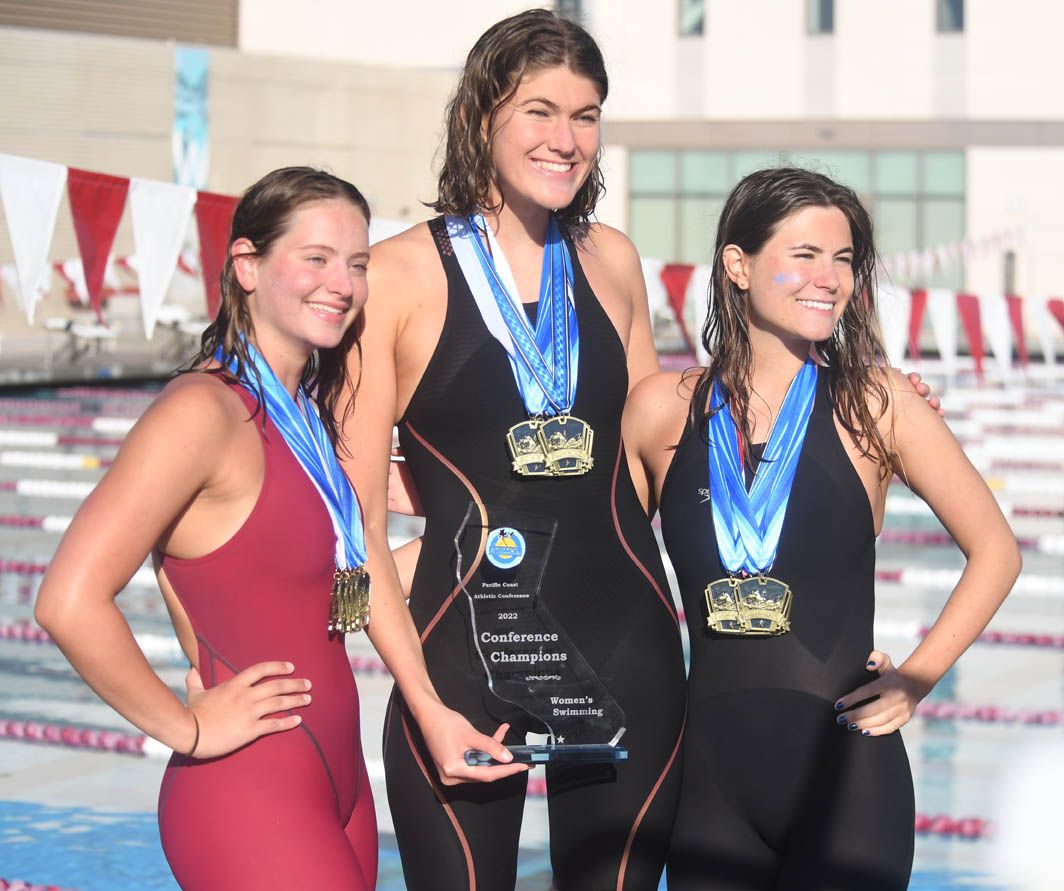 The Lady Griffins managed to squeeze in two event victories in a meet otherwise dominated by the Lady Olympians with 14 first-place finishes, including diving.

A 2021 graduate of Granite Hills, Dickman placed runner-up at the Grossmont Hills League finals in the 500 freestyle and 100 backstroke and was part of two league championships. 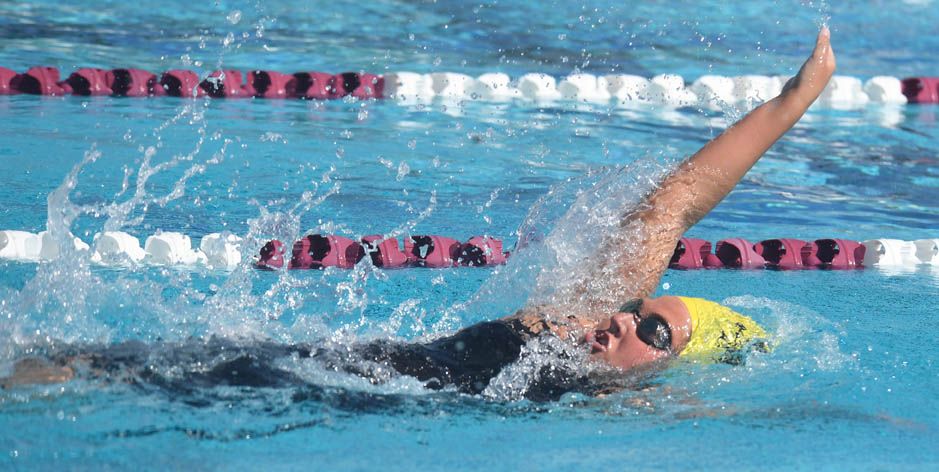 “People underestimate the competition at the JC level,” Dominique said.

The top eight divers from the Southern California region advance to the state meet. 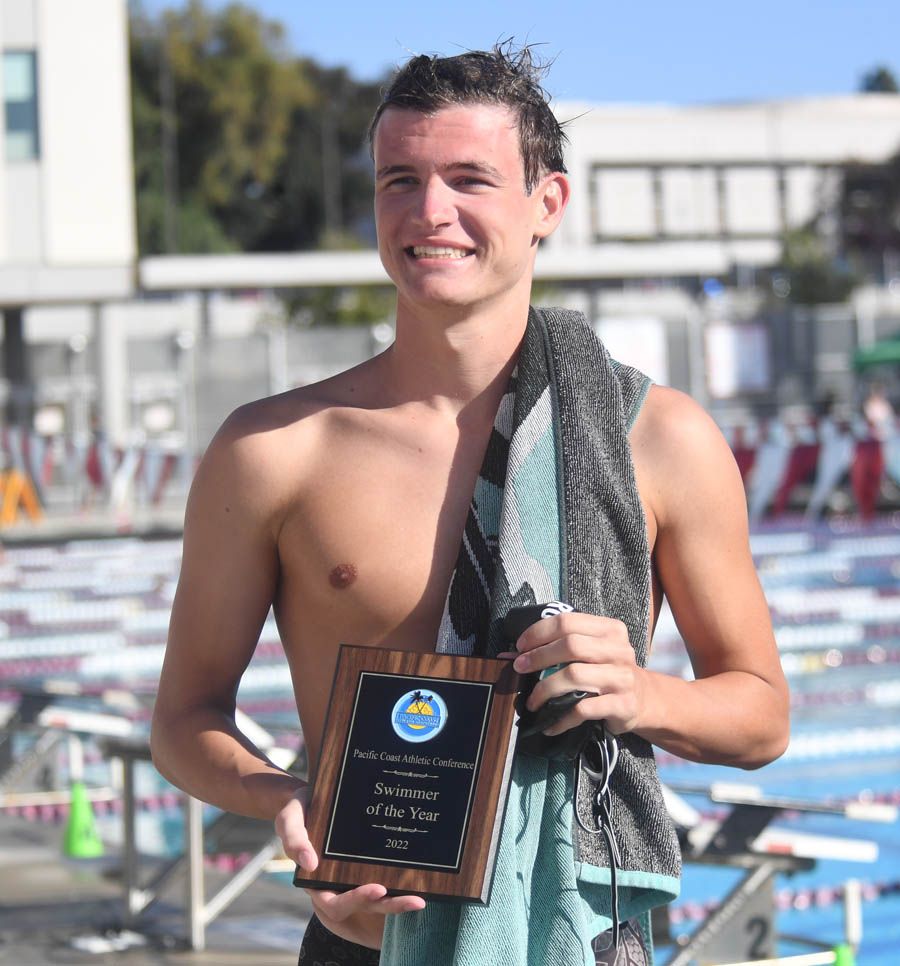 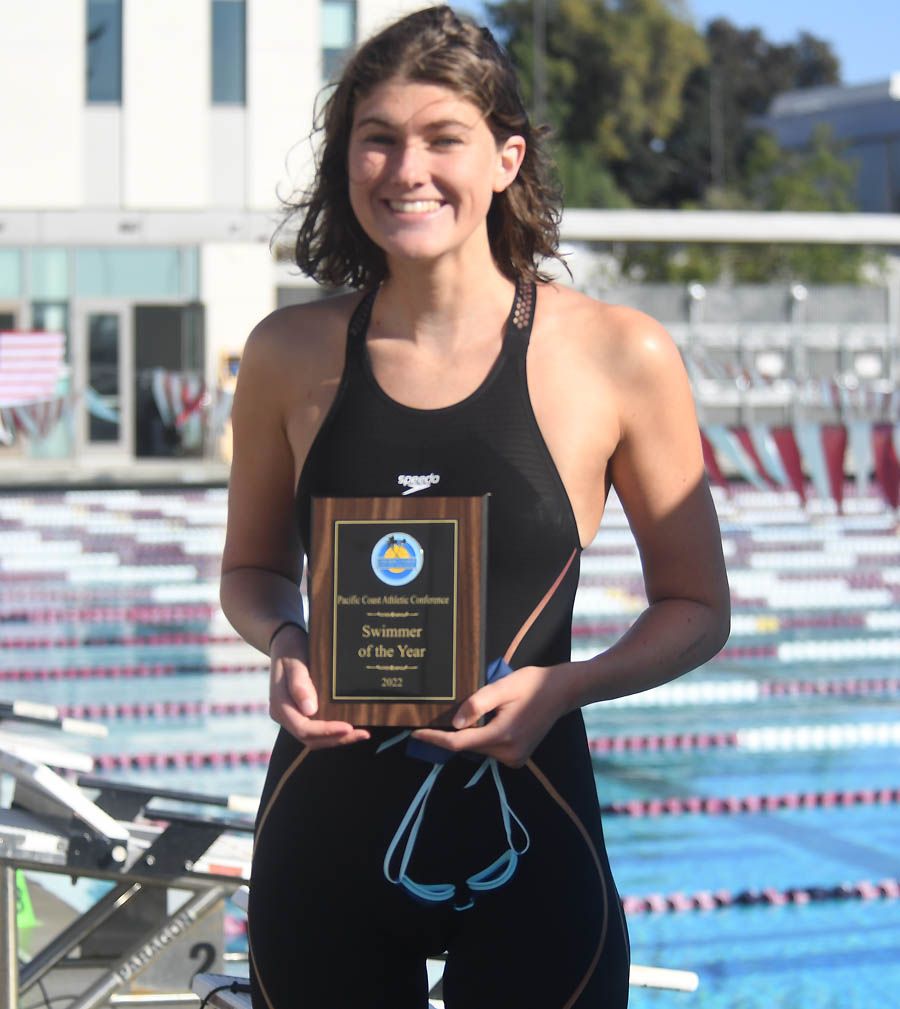