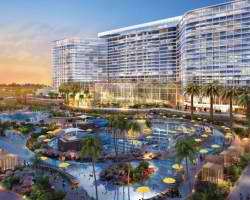 On Aug. 10, the Latin Business Association, based out of Los Angles, held a press conference behind Bayside Park in opposition to the construction in the Chula Vista Bayfront Master Plan.

Ruben Guerra, association chairman claimed the city of Chula Vista and the Port of San Diego are excluding local Hispanic companies from the Chula Vista Port development despite the use of public funds.

The resort hotel and convention center are the centerpiece and catalyst project of the CVBMP, a decade-long joint planning effort by the Port, the city of Chula Vista and a stakeholders.

The total estimated cost for the resort hotel, convention center, parking structure, and associated public infrastructure and parks is estimated to be approximately $1.23 billion.

RIDI Development Corporation is the general contractor for the project in a joint venture with subcontractors M.A. Mortenson Company and McCarthy Building Companies Inc.

Guerra said the organization has spent the past three months talking with RIDA, McCarthy, Mortenson, and the Chula Vista City Council.

“When all of this started about a year ago when they brought up the project again, City Council said it would create many jobs and one of our contractors got up and asked about including local minority contractors,” he said. “(City Council) said they were going to set up some goals, but a month and a half later they said they were not going to set any goals and said they would do a good faith effort.”

Guerra said the organization has fought for Latino and minority companies in its more than 45 years of service.

“Unless they set up a good goal, it is not going to happen,” he said. “He said he was told that they would not set up goals because RIDA was the only company that responded to the RFP. We do not know how the process went, how they picked this company. I told them if they were not going to set goals, we are going to have problems.”

Guerra said he met with Mayor Mary Casillas Salas, and she told him that the city’s hands were tied, it is now in the hands of the Port. He said the Port said it falls on RIDA and that RIDA is not responding to its concerns.

“Everybody is passing the buck to see how to get out of this,” he said. “That is why we had the rally and press conference. And it is not only Chula Vista. San Diego just had a disparity study and showed that only 19% of all contracts have been given to all-white contractors. This is not good and there has to be change. And we are starting with Chula Vista and this big project.”

Port of San Diego Public Information Officer Brianne Mundy Page said it is important to note that at this time, only the general contractor has been selected and no other contracts have been selected at this time and that Trade Prequalification was due in mid-July. Via email, the Port sent the following response.

“The Port of San Diego, the City of Chula Vista, and RIDA have taken proactive steps to include potentially qualified local contractors and subcontractors in the development of the Chula Vista Bayfront. The extensive outreach conducted for this first phase, particularly through education about opportunities to bid, demonstrates a shared commitment to inclusivity.

“RIDA has a proven track record of partnering with local communities to deliver large-scale real estate development projects to effectively and efficiently produce first class results on time and on budget. RIDA selected as the general contractor a joint venture comprising M.A. Mortenson Company and McCarthy Building Companies, Inc. As part of its outreach to local and regional subcontractors, on Dec. 9, 2020, Mortenson/McCarthy held a virtual workshop to highlight bid opportunities. The event was widely promoted by the Port, the City, RIDA and Mortenson/McCarthy; open to all trade partners, suppliers, and vendors; and attended by more than 570 people.

Mortenson/McCarthy held a second event on June 22, 2021, dedicated to Disadvantaged Local Contractors with more than 70 people in attendance.

“Beyond the outreach events conducted in December 2020 and June 2021, RIDA has reported to the Port that the joint venture has also gone above and beyond to conduct research on potentially qualified subcontractors. This includes review of all Mortenson and McCarthy relationships and databases for local and regional subcontractors. McCarthy has widely and publicly advertised this project in the AGC Good Faith Report, AGC Planroom, the San Diego Daily Transcript, and the Associated Subcontractor Alliance (ASA) Weekly Posting. For more information about contractor opportunities, go to mmjvgp.com.”