The Olympic proposition, at first, seemed like a social media prank. But it has sparked Lauryn Nazareno’s latest athletic crusade and a newfound appreciation for her Philippine heritage.

About six months ago, a stranger sent a direct message on Instagram to Nazareno, 20, of Chula Vista, saying, she’d be “a great fit” for the Philippine women’s national rugby team.

“Philippine rugby? This had to be a joke,” recalled Nazareno, a former Otay Ranch High School track standout and current junior multisport athlete at St. Mary’s College of California.

Nazareno has only played rugby since April, tackle rugby on her college club team since October. She has never been to the Philippines. She doesn’t speak the language — “not one lick of Tagalog,” she said.

But her father, Maynard, is Filipino, born and raised in the Philippines until age 11, when he came to San Diego. “And I’ve been running around with a lumpia (traditional Filipino egg roll) in my hand since I was 3!” said Nazareno, proudly.

Representing her family’s homeland in rugby is no joke.

The underdog Volcanoes opened pool play against Thailand on Nov. 19. By then, the Volcanoes—all players of Philippine descent who grew up around the world—would have had less than a week to practice together.

“I’ve only seen my teammates from the waist-up in Zoom,” said Nazareno, laughing, before leaving for Dubai. “But we’re all fired up and ready to show our skills and pride in the Philippines.

“You never hear about great Philippine athletes, except for in boxing (Manny Pacquiao), and I couldn’t tell you one Philippine woman who made the Olympics, WNBA, or even a softball team.”

Nazareno, who is 5-foot-5 and a lean but rugged, tackle-tested 135 pounds, plays wing. The position capitalizes on the speed-endurance versatility she showcased as a sprinter-turned-middle distance runner at Otay Ranch High School and St. Mary’s.

It was her senior year in high school that Nazareno first learned about rugby from a friend, Inoke Junior Waqavesi, a rugby player working out at the U.S. Olympic Training Center in Chula Vista. Nazareno, who had grown up playing soccer and football, was game.

“There was something about the team culture and camaraderie that I really liked about rugby,” said Nazareno, who left St. Mary’s track and cross-country teams after two seasons to focus on her kinesiology degree and play club rugby.

Sharing her love for the sport this past summer on Instagram rugby community drew the attention of William Raines, a chiropractor and San Diego-based recruiter for Philippine rugby player development.

Nazareno admittedly didn’t have much of a rugby career. She had been a runner with personal bests of 2:29.63 in the 800 and 5:20 in the mile. She had kicking and throwing skills from playing soccer since age 10 and football in high school.

But she doesn’t have rugby stats, per se. And she didn’t even have film. So, Raines came to meet Nazareno at a Chula Vista youth rugby camp where she was a volunteer coach, gave her an informal tryout, and connected her with Philippine Volcanoes CEO Jake Letts, who invited her to join the national team and get an all-expenses-paid trip to Dubai to play.

“I still can’t believe I’ll be competing for the Olympics,” she said. “In rugby! For the Philippines!” 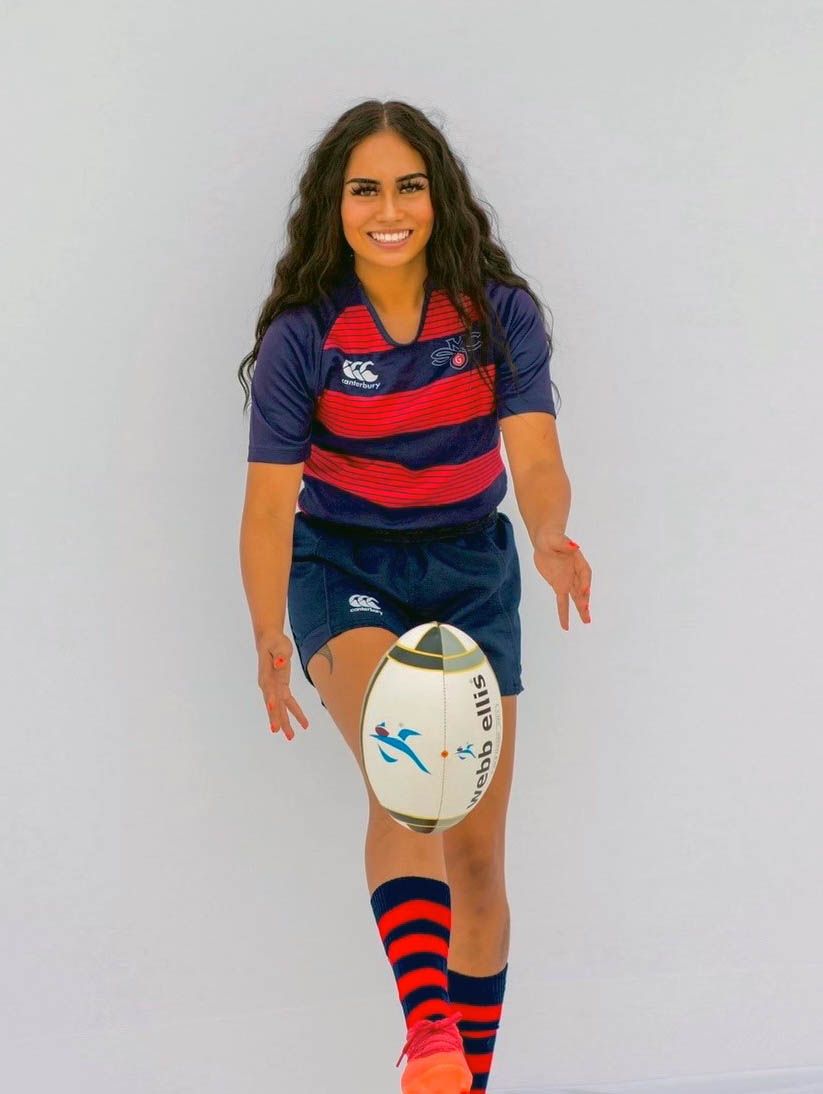 Philippine Pride
This athletic adventure has Nazareno reminiscent of her family’s roots. With olive skin, a golden complexion, brown eyes, a broad smile, and long, thick, dark, straight hair, she considers herself half-Filipina, half-Mexican, “equally proud of both,” she said, and all-athlete.

She gushed affectionately about her paternal grandmother, Myrna Counterman, 77, of Bonita, who introduced her traditional Filipino foods, such as the tangy sinigang fish soup, the rich kare-kare peanut stew, and, of course, lumpia.

Her grandmother passed along cultural ideals such as education-first and a strong work ethic. There was the stereotypical Filipina overprotective maternal side, which forbade the athletic Maynard, Nazareno’s father, from playing organized sports.

And there were Filipino family fiestas with buffet-style spreads, complete with Karaoke machines and Philippine TV, and the quasi-medicinal “treatments,” such as taking baths with buckets of water (no showers) and putting Vicks mentholated vapor rub on your feet or a single paper towel on your back when you’re too hot or febrile.

“Grandma always put a paper towel on my back because I was always sweaty from playing sports,” Nazareno said. “She’s so proud I’m representing the Philippines, and that I’m athletic—even though she gets scared when she watches me play.”

Nazareno proudly represents her grandmother, too, “because I know what it took for her to get here (America).”

Her voice softening to a serious tone, Nazareno recounted a tragedy nearly 60 years ago in the Philippines.

Her grandfather, Mariano Nazareno, a banker, was carjacked while transporting money. He was shot and killed, his body brought home to widowed Myrna and the son, Maynard, she would have to raise on her own.

It was his first birthday.

Resilient, Myrna went to work, doing nails to support her family while earning a teaching credential, teaching classes, and trying to get to the United States. She made four trips to America, each time hoping to find opportunity, a husband—and a green card.

“She was even willing to pay for a husband,” said Nazareno, humored. “As the story goes, my grandpa (Ben Counterman), who was in the Navy, said he’d marry her for $2,000 and an RV.

“My grandma said, ‘Deal!’ They got married; brought my dad over when he was 11; bought a house in National City, Old Chula Vista, and now Bonita; and my grandma became a dental hygienist and raised her family.”

Nazareno sprinted through that family legend.

Soon, Lauryn Nazareno will be adding to her family’s story as a member of the Philippine National Rugby Team.

“Who even knew they had a team?” said Nazareno. “Well, we’re hoping to change that.”

Watching will be her college and high school teammates and her athletic trainers and performance coaches Marcus Block and Payton Schmid of Ambition Sports Performance, and Less Spellman of Spellman Performance, and her strength and conditioning coach Bryce Calloway of Daygo Built.

She’d like to give a shout out to the Madrigal, Clark and Mika families; Roxelle Thomas, Ashley Torrecillas, Trinity Santana, Jake Negrete, Valu Kauvaka and Dylan Zolezzi.

And, to her family, she’d like to say salamat po!, which means thank you in Tagolog.

Nazareno has never been to the Philippines. But her father, Dennis Nazareno, and his parents were born and raised in the Philippines, with Dennis and his mother, Myrna Counterman, setting in the San Diego County when Maynard was 11 years old. Lauryn learned to embrace Filipino culture and traditions from her grandmother.

Nazareno, who considers herself half-Filipina, half-Mexican, looks forward to representing both nations—in spirit—as she plays the sport more popular in other parts of the planet, namely New Zealand, Wales, Ireland, Australia, England. and Japan. These nations will be among the favorites in Dubai against the underdog Volcanoes, who have recruited talented athletes of Philippine decent from around the world.

“Before Dubai, we would have never even played together; we’ve all just met on Zoom,” she said. “Some are from the Philippines, a few from the United States and Canada, and other countries, and we all love our heritage. That’s what we’re playing for.”

Nazareno, who is majoring in Kinesiology, competed for the Div. II West Coast Conference St. Mary’s of California Gaels in track and cross country before switching to club rugby this past fall. She has personal best times of 2:22 in the 800m and 5:34 in the mile. She was a sprinter, middle-distance and relay runner at Otay Ranch High School.