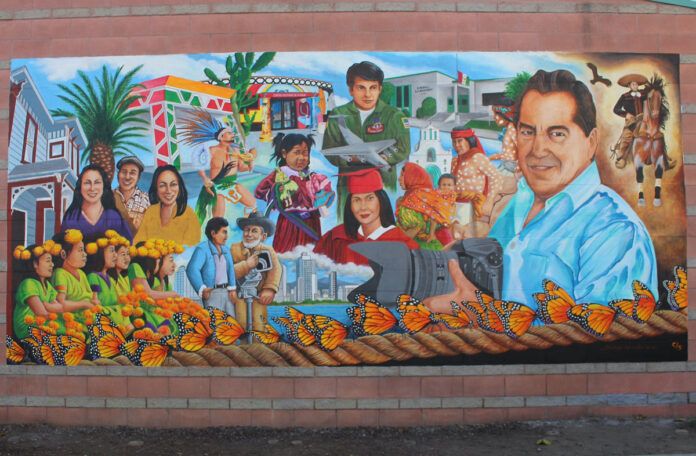 Guillermo Aranda, 76 is five feet up a ladder outside the Chamber of Commerce on a sunny, Friday afternoon in National City. Roller in hand, he is sealing the colorful paint on a mural he and fellow artists Sal Barajas and David Avalos have been applying to the exterior wall of the Chamber for several weeks.

The clear finish they are using is intended to guard against future graffiti, with an extra layer of sealant rolled onto to the lowest levels where vandals are more likely to tag the wall.

The mural features images specific to the life of Manuel “Memo” Cavada,a longtime community photographer who passed away in 2020 after having captured 50 years of local history.

Originally, the Request for Proposals from the National City Chamber of Commerce called for one design. Once all the submissions were in, however, Cavada’s son Martin Cavada decided he wanted to primarily utilize Aranda’s design while also incorporating a few artistic details from Barajas’ proposal.

“The ultimate goal was to make this a demonstration of who Memo was,” Barajas said.

He describes a man who was brave, an accomplished artist, a steady community figure and a friend.

A quick glance at the mural reveals Kimball Elementary School, young Cavada in an Air Force flight suit adorned with the Purple Heart he earned saving a friend in Vietnam, the Mexican flag, an older Cavada with a camera.

However, the mural also tells the story shared by all three of the artists who have been working on the wall for over two weeks: that of a young man who took to the military as a ticket out of National City and ultimately spent a lifetime traveling through Mexico and California, documenting the flow of humanity through art.

“In the early 1960’s, it was easier to go join the Air Force, you know? It was a ticket out of poverty for National City boys and after the Air Force, you could use the G.I. Bill to go to college,” Barajas said, watching Avalos with admiration as he continued to work on the wall.

Decades later, Barajas is an accomplished artist who now creates motivational posters and flyers as part of his Trabajando Juntos outreach. Most of his boldly drawn pieces target young adults with bold designs and symmetrically placed slogans. The messaging targets teachers, families and students, especially high school girls who he is concerned might find it easier to start a family than attend college, and his eyes light up as he talks about the importance of education, college, literacy.

Education features heavily in all their accomplishments. Aranda has painted dozens of inspiring murals in schools throughout California and Avalos is a politically driven artist who has worked throughout the entire border region and is on faculty at California State University San Marcos.

Bajaros touts the value of biliteracy and just as the sections of the mural they painted overlap and blend into each other, there are similarly blurred lines in all three of the artists’ careers with politics and art, a nod to National City and an eye to the Mexican border prevalent in their work.

“When I got out of the military, I got involved with the Centro Cultural de la Raza in Balboa Park,” Barajas said.

Avalos, another Air Force veteran, was also heavily involved with the Centro while Aranda was instrumental in directing the Toltecas, the artist group who essentially created the Centro Cultural de la Raza.

Aranda said he worked on the mural inside the Centro for 15 years, creating La Dualidad, a statement on how everything that benefits us also has the power to harm us.

“Everything has duality,” Aranda said.

Now a muralist based out of Santa Cruz county, he has painted “nearly 100” murals in that area.

“This is the first mural I’ve ever painted in my hometown,” Aranda said, gesturing to the Chamber wall.

The mural, currently tucked away under a protective tarp as if preserving Cavada for the community to see again for the first time, is set to be unveiled Dec. 15. Avalos was quiet as Barajas described his graphic design work and remained just as quiet while Aranda talked about his work up north. With a serious expression, he asked not to appear in any photos and deferred all credit to the others.

As they packed up the supplies one last time and left for a late lunch, Avalos said there is a symbolic triangle formed by the decorative bell in front of the Chamber building, a statue of retired National City Mayor Kile Morgan, and the new mural.

The bell, he said, symbolizes El Camino Real, the path taken by missionaries who passed through California as religious conquerors and the statue of Morgan symbolizes white patriarchy, to his eyes. Cavada, he said, is looking out from the third point of the triangle, part of a different path that symbolizes hope and change.