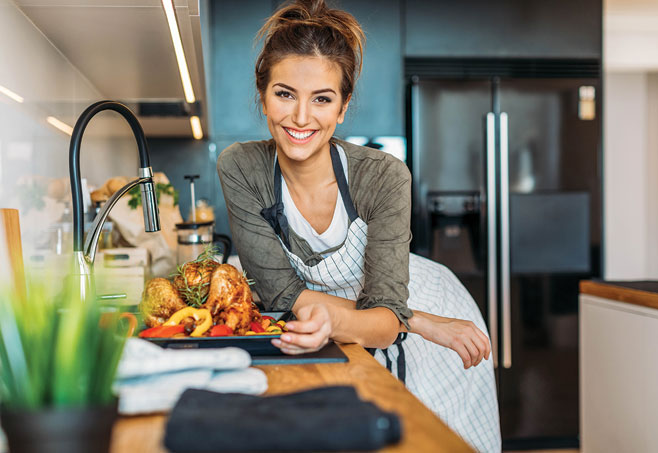 At the Chula Vista City Council meeting on Sept. 28, the City was prepared with an ordinance to oppose the County’s proposed MEHKOs ordinance, but after deep discussion, and a split between council members, decided to hold off until a draft ordinance was made available, and council could further investigate the subject matter of the ordinance. After a presentation from the County and discussion on the matter, Council unanimously approved a motion to wait for the draft ordinance and asked the County to come back to council by the end of October.

Department of Environmental Health Chief Heather Buonomo said this established a new type of retail food facility at a home that expanded the menu options to allow more of a mini home restaurant. She said the governing body of the enforcement agency, the county of San Diego, have the authority to opt-in for the entire region. Currently there are seven jurisdictions in the state that have implemented a MEHKO program, and one doing a MEHKO pilot program. Buonomo said that if the county opts in for MEHKOs, it would be for the entire region and individual cities would not have the option to opt out.

MEHKO is a California Retail Food Code with established requirements that cannot be modified at a home, or apartment, mini-restaurant. Residents can serve 30 meals per day and 60 meals per week with a maximum of $50,000 gross annual sales. Customers can dine in at the home, pick up orders, or receive deliveries. A health permit is required prior to operating and health inspections are limited to more than one time per year and are scheduled with the operator of the MEHKO.

Chula Vista mayor Mary Casillas-Salas said at looking at the state law, that only having the ability of one scheduled health inspection per year and was concerned that the draft had not already been drafted, and the lack of influence that the city has in controlling what is and is not in that ordinance. Buonomo said that the state law cannot be changed.
Salas said the city already has a huge problem with “rogue businesses” already working from residences and that the city does not have the numbers to ensure compliance, and the fact that MEHKOs do not require a business license to operate.

“I know that within our own city and the limitations that we have with our own code enforcement department, some of these things being considered would be a nightmare for our city,” said Salas, asking if there would be any additional financial assistance from the county or state in which Buonomo said there would be no additional funding for the cities.
Council member John McCann said he had two major concerns about the proposed ordinance, food safety and local control, and agreed with the mayor on her concerns.

“I believe this is coming down from Sacramento, and if the county accepts this, they do not give us the ability to opt out,” he said. “I believe more in local control. This may be good in a restaurant/food desert, but we in the city of Chula Vista have many quality restaurants that during this COVID period are struggling just to stay open. We should be focused on helping our current businesses and restaurants stay alive.”

McCann said if the city has the option to oppose this ordinance, that it should.

Council member Jill Galvez said she strongly opposes the proposed ordinance, saying she thought that if the city was in a more rural environment where there was not a restaurant on nearly every block it might be different.

“This would be very problematic,” she said. “Especially when it comes to grease fats, the impacts on our sewer, especially when you get into multi-family housing…this is problematic in so many ways.”

Galvez suggested that the county talk with border organizations for the risks of sewage problems, as much of the sewage problems in South Bay come from homes at the border holding businesses in their homes are a big problem with the Tijuana River sewage problems, as grease and food waste is a substantial portion of the river’s pollution problem.
Salas said that the competition between MEHKOs and brick and mortar businesses could not compete, especially with the ability to have MEHKOs in very dense areas such as condominiums and apartments, and the city’s inability to limit the number of MEHKOs.

“It does not sit right for the city of Chula Vista, and I think it would be foolish for us to do anything but oppose this ordinance by the county, as well intended as they are.”
Council member Andrea Cardenas said that a food desert is not about the number of restaurants in a community, but the quality of food available for residents, with the availability of fresh produce, high quality ingredients.

“In my district, that is something that is extremely limited,” she said. “This is an equity issue, and I am going to spice up this meeting by not agreeing with the rest of my colleagues that have spoken. This program allows folks that do not have the resources to open up their own businesses to have access to open up and have their entrepreneurial spirit and access to have their own business.”

Cardenas said for her, this was personal.

“My mom cooked out of our house when we were able to live with our aunt, and that is how my parents were able sustain our family for three years. I know that is a reality for a lot of folks. And being able to legitimize their experience and what they need to do to survive, I understand the concerns. But I think that if we continue to have this idea of all these bad operators, and do not think about the equity component of this. We cannot work under the assumption that something that can create benefit and create an equitable playing field for people, is going to be taken advantage of. If something can benefit people, that is what we should be looking at.”

Cardenas said she thought it was “ironic” that a few months ago, council honored the Eastlake Food to Go page as one of its Chula Vista Champions, when 95% of businesses promoted there were people cooking out of their houses, and now council would oppose  this.

“I am having a little bit of a conflict with the message that we are sending to oppose this,” she said. “At the end of the day, this is giving people the opportunity to start a business in their home that could eventually become something bigger. Opening access and opportunities is not limiting opportunities for other people. If we continue to think in that mentality, we are holding back folks.”

Council member Stephen Padilla said there are legitimate concerns, but that knowing some of the people that work on the Board of Supervisors, that his understanding from the staff report is that there has been limited conversations between the city and the county and that he would like the opportunity to open that door of discussion between the two before moving forward with opposition. He said he agreed with Cardenas about the “spirit and intent” of this program.

“For me, I think it would be premature for me to vote for a letter of opposition tonight because the county is just beginning this process. I am interested in understanding why my colleagues on the Board of Supervisors are supporting this,” he said.