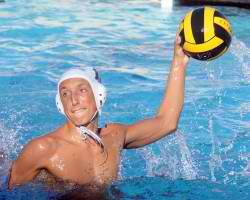 Mater Dei Catholic’s dominance in the pool was apparent early in the season when the team won the championship title of the East County Invitational and, in the process, recorded a school-record 12-game winning streak.

The Crusaders (18-10 overall) won their opening five league games before hitting a bump in the road by dropping three of four contests. But Souza’s team finished strong with a timely 16-7 win against Otay Ranch to nail down this year’s league title.

Mater Dei Catholic finished with a record of seven wins and three losses in league play. The Crusaders finished one game ahead of runner-up Eastlake (6-4 in league play).

Brown earned honors as this year’s Mesa League Player of the Year. He finished the season with 121 goals and added 91 assists for 212 points. He previously scored 125 goals and 185 points as a freshman and 113 goals and 175 points as a sophomore.

The Crusaders received the No. 8 seed in the San Diego Section Division II playoffs and hosted ninth-seeded La Jolla Country Day in a first-round game on Nov. 8.

The Crusaders’  season of plenty ended in the quarterfinals on Nov. 12 with a 15-8 loss to top-seeded Valley Center.
Hernandez led the Mesa League champions in the game with four goals and two assists while Brown collected four goals and one assist. Garcia and Jimenez each were credited with one assist.

Mater Dei Catholic was down 4-1 at the end of the first quarter and trailed 9-3 at halftime in fighting an uphill battle.
Valley Center would go on to win the division title with a 12-6 victory against sixth-seeded San Pasqual.

Hernandez finished second on the team with 77 goals and 116 points. He also received recognition on the All-Mesa League first team.

While Brown and Hernandez took care of the team’s primary offensive needs, Saucedo, a newcomer, backstopped the team’s defense.

Saucedo had never played water polo before Aug. 10 when he came out for the team. “He made 164 saves for our team and was a major factor in our success,” Souza said.