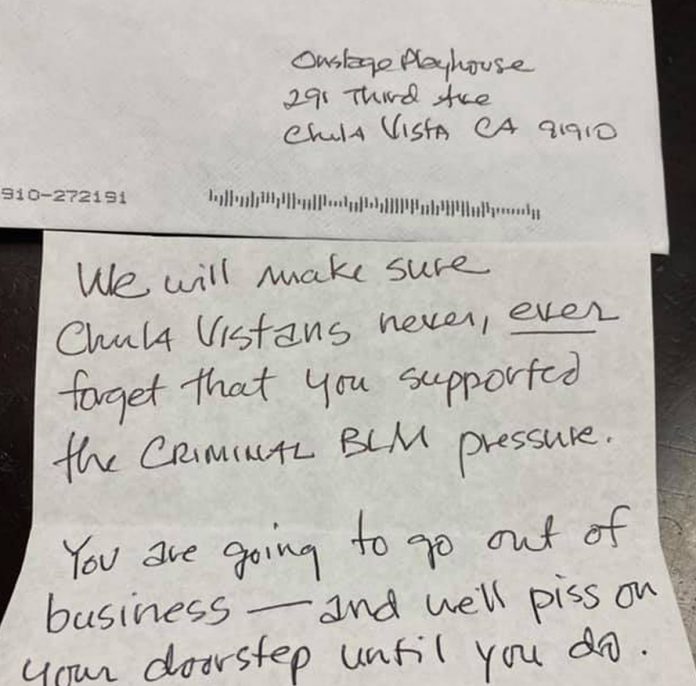 Chula Vista’s OnStage Playhouse received a letter on Nov. 17 that rattled artistic director James Darvas. The letter condemned the theater’s support of the Black Lives Matter movement, threatening to do whatever it took to close the theater down and urinate on its front doorstep.

The short note stated, “We will make sure Chula Vistans never, ever forget that you supported the CRIMINAL BLM pressure. You are going to go out of business — and we’ll piss on your doorstep until you do. You f—ing assholes.”
OnStage Playhouse board Vice President Ashley Gardner said after receiving the letter, the board created a racial equity statement and placed it on the theater’s website in a press release on Nov. 18.

“This has now become more than a one-time incident and is cause for concern,” stated Gardner. “Both letters have been turned over to the Chula Vista Police Department and Jill Galvez, Chula Vista Deputy Mayor, is aware. It is the theater’s hope that some light can be shed on this potentially dangerous situation. The neighboring business community and residents should be made aware.”

Gardner said the first letter addressed to Darvas at the Playhouse came from a Daniel E. Kincade. She said they found no match for Kincade in their system. She said she spoke to the police on Nov. 24 about the incident report, and the complaint was upgraded to a report and she received a new case number.

“We are going to ask, ‘Can you follow up with this Mr. Kincade man?’ Anybody can put a return address,” she said.

Chula Vista police did not return calls from The Star-News seeking comment.

Council member Galvez said she received an email from Gardner with two photos of the two letters on the morning of Nov. 18 and she immediately sent the hate mail and threats to police Capt. Phil Collins in charge of investigations. She said he responded right away and said,

“At first glance these letters appear vile and offensive but may not rise to the level of a crime to be considered a criminal threat, but I am including community police Sgt. Ernie Pinedo and will ask that his team contact the representative for OnStage Playhouse to better evaluate and make any recommendations.”

Galvez said it is sad that a letter threatening the very purpose of theater, is trying to persuade the local theater to do the opposite.

“Theater is meant to enlighten us and challenge our perspectives so that our society evolves and we may live more harmoniously,” said Galvez. “Those letters really sadden me, as it is clear that the individual who wrote them could benefit greatly by broadening his understanding and re-examine his hostile point of view.”

Darvis said there was much more to this story.

Darvis was out of town when George Floyd Jr. was killed during an arrest in Minneapolis. He said he emailed the theater’s board to show support for BLM in its window and changed the marquee to show support for the movement. He said when he returned, he received six or seven emails from people calling him names, a Marxist, communist, and said they would not be back to support the theater.

“I responded to each of them individually with tact and respect and offered to have an open dialogue with each of them on what their definition of BLM was and to explain what our definition was,” he said. “None of those people took me up on that offer.”

Darvas said he received another card in the mail from a longtime patron in July addressed to him. He said the card was filled with hate, presumably sent by someone who was a patron since 1986 and had moved to Encinitas and until that time had still driven down to support the theater.

“They still wrote really ugly words and a lot of assumptions of what our support of that movement meant,” he said.

“They signed their name and gave a return address. I kept that private because I felt it had the intent of a conversation with me. Then everything kind of calmed down. That letter really stirred stuff up inside of me and upon further investigation the post stamp is the same as the letter I received in July and the writing of this small letter is very similar. This letter’s return address is nonexistent. It was a short note on a small piece of paper. I took in what it said for a moment and then decided my work is not done.”

Darvas said this was all disturbing because as an artist, the theater is one of the safest places he has in his life. Hired as artistic director a year ago, he said he knew taking a new stance of producing works of color, hiring actors of color and diversifying the board might not be easy, but with the population of Chula Vista being more than 72 percent persons of color, that theater is supposed to reflect the world we live in.

So, he redid the window display, showing support for many marginalized people.

“I want the neighbors and fellow business owners on Third Avenue to know what is happening. It is not acceptable,” he said. “If you no longer want to patronize our establishment due to your personal feelings on a social topic, you have every right to do that. You do not have the right to threaten to take our business away. To say you are going to piss on our doorway every day. That is uncalled for. So I am mad and I am motivated. My Facebook post has been shared 116 times, we have received a lot of donations from all over the country and from the United Kingdom.”

Darvas said to date, the theater received $1,100 in donations and he knows he has the support of other theaters in San Diego, but it is time to make sure people are not confused, the times of catering to specific audiences are over.

“That is not what the theater is going to be about any longer,” he said. “They have been catered to for decades. If you are continuing to produce the great works of Neal Simon and Woody Allen, that is one specific race of people. And specifically, one certain gender. If I were a person of color, if I were more marginalized than just being a homosexual male, I would not want to come into a theater. I would feel like it was not there for me. I understand those statistics, but it is time to change those. That is what I plan on doing, starting specifically in Chula Vista.”

Darvas said people in Chula Vista need to understand that the theater is for them, they are welcomed, and encouraged to come in and hear stories and then talk about those stories afterward.

OnStage Playhouse in now in rehearsals for its next world premiere production of “Monumental History” that will run from Jan.8-24 virtually. Darvis said he came up with the concept to reflect what is going on socially in America. He commissioned six local playwrights, five of them people of color, to write a 15-minute monologue that takes place in a place called Victory Park in Centerville.

“It is in the center of the country and the pieces all take place in Victory Park and there is a statue there,” he said.

“We are looking at six different perspectives of what that statue means to people. If it should stay there, or if it should be taken down. It is going to be a wonderfully relevant production.”