The San Diego Section will crown its six divisional baseball champions on May 26-28, at the University of California San Diego’s Triton Field.

A glut of 14 South County teams gained admission to this year’s playoff field, including four-seeded teams and four teams in the Division III bracket.

The mission for all teams is to qualify for the double-elimination rounds and stay in title contention for as long as possible.

Several teams received seeds that could result in a deep run.

The Open Division title game is scheduled for Friday, May 27, at 7 p.m.

The Division I final is scheduled for Thursday, May 26, at 7 p.m.

The Division II championship game is slated for Friday, May 27, at 4 p.m.

The Division III title contest is scheduled for Thursday, May 26, at 4 p.m.

The Division IV championship game is scheduled for Friday, May 27, at 1 p.m.

Summit League runner-up Bayfront Charter (9-5) and Kearny met in a play-in game on Monday to determine the No, 12 seed in the Division V bracket. Kearny won, 16-0, to advance to meet fifth-seeded Ocean View Christian Academy (13-6) in Tuesday’s opening single-elimination round. Chula Vista Learning Community Charter (7-9) received the No. 8 seed in the division.

Ocean View entered the playoffs as the Patriot League co-champion.

Teams seeded one through four in Division I through Division V received byes in Tuesday’s elimination round and will draw winners from Tuesday’s slate of games in first-round double-elimination games on Wednesday.

Teams could play as many as six games to win a division championship.

Eastlake will draw the winner of Tuesday’s single-elimination game between seventh-seeded Carlsbad (12-17) and 10th-seeded Point Loma (9-17-1).

Montgomery will draw the winner of Tuesday’s single-elimination game between seventh-seeded Mission Hills (20-8) and Otay Ranch.

Olympian will draw the winner of Tuesday’s single-elimination game between seventh-seeded Brawley (15-11) and 10th-seeded Maranatha Christian (16-12).

In other single-elimination games on Tuesday, Bonita Vista took on Cathedral Catholic (14-16) in the Division I encounter while Mar Vista hosted El Camino (10-18) in a Division III matchup, Hilltop ventured to fifth-seeded La Jolla (17-11) in another Division III contest and Mater Dei Catholic journeyed to play Mission Vista (15-11) in yet another Division III game.

Montgomery head coach Manny Hermosillo sits at career win 737 entering this year’s playoffs. He feels he has a team to make some noise.

“We won 17 games last season and gained experience to go into this season,” he said. “We didn’t panic and pulled together in tough games. We expected it and executed. CIF is in sight  and it’s now the goal to go as far as possible to win the last game of the season.”

Mendoza, Alvarez and Camargan top the team with 15 RBI

Senior Adrian Herrera leads Montgomery into postseason play with a 6-1 record on the mound with a 0.60 earned-run average and 62 strikeouts in 58.2 innings while Mendoza is 5-1 with a 1.14 ERA and 28 strikeouts in 37 innings.

Sophomore Eddy Montoya keys San Ysidro with a 0.345 hitting average while senior Rafael Navarro has 25 RBI. Navarro also leads the team with a 1.59 ERA on the hill.

One of the four Open Division quarterfinal games on Wednesday featured an upset.

Of the 44 games played in all divisions on Tuesday and Wednesday,14 upset victories were logged – or 32 percent.

“We tell the guys you have to be ready for anything because it’s the playoffs – it’s intense,” veteran Montgomery High School skipper Manny Hermosillo said following his team’s 3-2 come-from-behind victory over visiting Mission Hills in Wednesday’s first round of the Division II double-elimination bracket at Peterson Junction.

The second-seeded Aztecs, who improved to 20-6 on the season, nursed a 1-0 lead through five innings before a throwing error in the top of the sixth innings resulted in the seventh-seeded Grizzlies (21-9) taking a 2-1 lead. The hosts tied the game in the bottom of the frame and weathered several Mission Hills scoring chances before finally putting bagging the win in the bottom of the ninth inning on junior Jose Mendoza’s sacrifice fly to medium-deep center field with the bases loaded.

Herrera, who tossed the second no-hitter in his career in Montgomery’s final regular season game, a 6-0 win at Eastlake to secure this year’s Metro-Mesa League championship, appeared to be humming along until the Grizzlies placed two runners on base with none out to start the sixth inning.

A bunt and overthrow at third base allowed two runners — senior Julian Aparicio and sophomore Riley Brown — to score.

But the hosts responded with a much-needed run of their own in the bottom of the inning as senior Andres Salazar reached base on an infield hit, then advanced to second base on a passed ball. Junior Antonio Serena followed with a walk to place runners and first and second bases. Alcala slapped the ball through the hole between shortstop and third base to score the game-tying run.

Herrera lasted until the top of the eighth inning when he reached the mandatory pitch count after allowing a lead-off basehit and sophomore Luis Arturo Chavez entered the game.

The Aztecs got out of the game courtesy of a double play to extend the game to the ninth inning.

Mission Hills loaded the bases in the top of the ninth inning but somehow wasn’t able to push across the go-ahead run.

The hosts were able to do that instead in their half of the inning.

Alcala took first on a sharp infield hit and took second base on an overthrow. Sophomore Aaron Herrera drew a one-out walk and senior Benji Solano managed to get on via an infield hit to fill the basepaths.

Mendoza was looking at three balls early on in the count, and it appeared the Grizzly reliever might even walk in the winning run, before junior Blake Cortez recovered to work the count full.

Adrian Herrera and Chavez combined to limit Mission Hills to four hits while striking out 13 batters while Sally and Cortez combined to strike out seven Aztecs while issuing five walks.

Each team committed one error. Both teams used timely double plays to get out of jams. 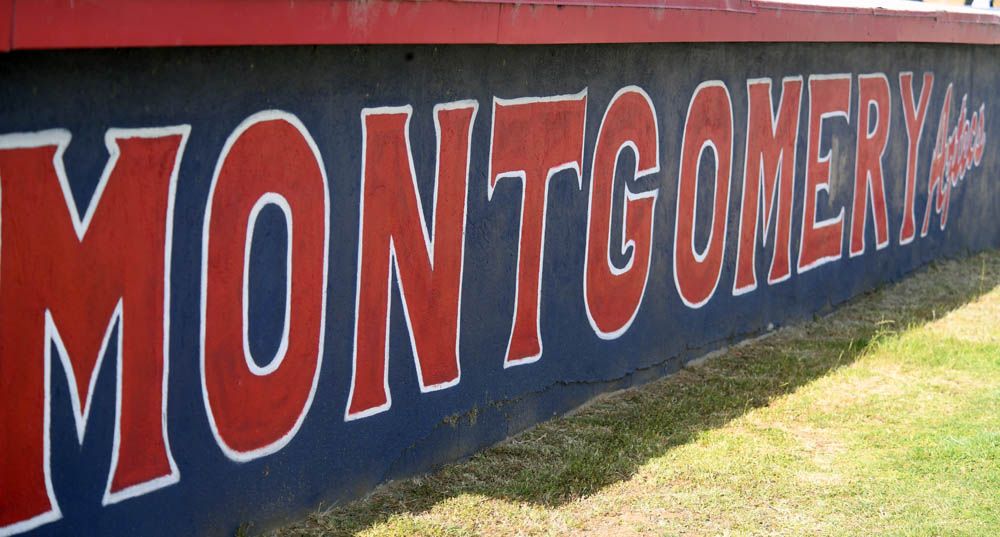 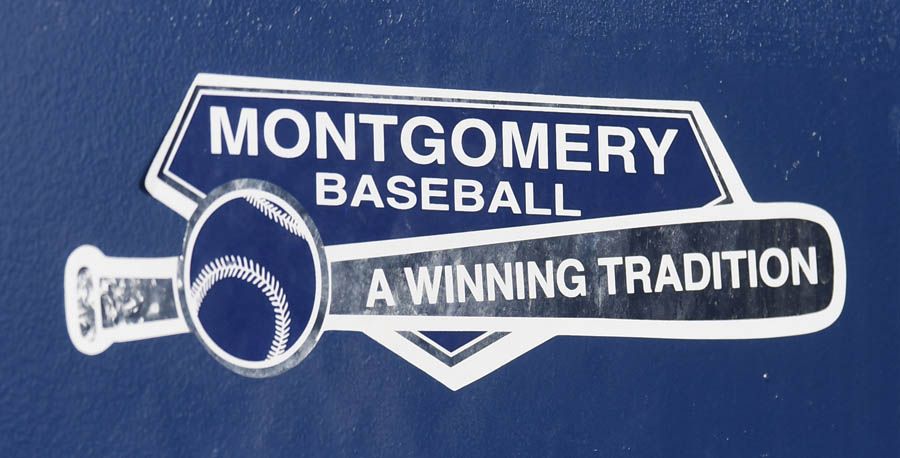 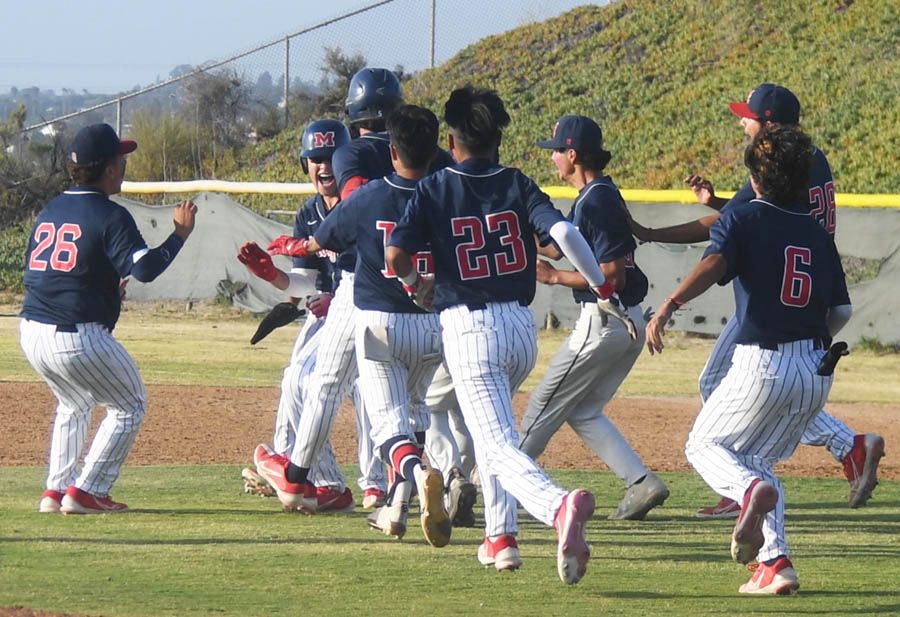 Veteran Montgomery High School baseball coach Manny Hermosillo admitted it was a “tough” week entering back-to-back games against the Otay Ranch Mustangs and Eastlake Titans as the teams were embroiled in a three-way tie for first place in the Metro-Mesa League standings.

Montgomery defeated host Otay Ranch, 10-1, on May 3 to set up a climactic encounter at Eastlake for the league title on May 5.

The Aztecs prevailed, 6-0, on a no-hitter courtesy of senior Adrian Herrera to place the Aztecs alone on top of the standings and clinch this year’s league title.

Herrera threw a complete game no-hitter, the second no-hitter in his career, and the sixth in school history. He struck out nine batters, walked three, faced 25 batters and tossed 103 pitches in the championship game victory.

The league championship was the 23rd for Hermosillo since he began coaching the team in 1984.

By contrast, the Aztecs rapped out 11 hits against three Eastlake pitchers.

Junior Jose Mendoza hit a two-run home run in the third inning to open scoring in the game. In the fourth inning, senior Benji Solano singled in two runs and senior Andy Alvarez singled in the fifth run.

Junior Danny Alcala singled in pinch-runner Luis Torres in the top of seventh inning for Montgomery’s final run in the contest.

Playoff pairings in Divisions I through V (12 teams each), and the Open Division (eight teams), will be announced on Saturday.

All divisional championship games are at UC San Diego.