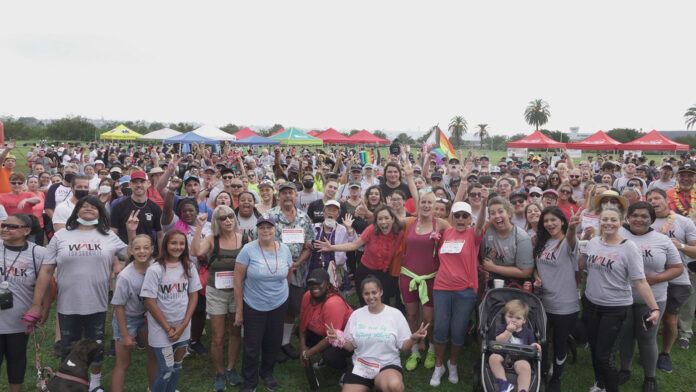 McAlister Institute is holding its 10th Annual 5K Walk for Sobriety on Sunday, Sept. 25 at NTC Park at Liberty Stadium with check-in and registration beginning at 8 a.m. Jean McAlister, founder of the McAlister just celebrated her 90th birthday in July, and 66 years of sobriety in November. Headquartered in El Cajon, McAlister provides services for those fighting addiction in East County, South Bay, North County and more. McAlister just celebrated 45 years of the McAlister Institute in providing services in the county.

McAlister said the event includes many information booths, activities for children, and that the event is support dog friendly as long as they are on a leash, and there are prizes for the dogs and children.

“The walk is to support people in recovery,” she said.

McAlister said between the pandemic and the opioid crisis, organizations like hers are struggling to keep up with the demand for services.

“We are County funded and restricted with county funds as to who they can accept into its treatment program,” she said. “These funds (from the Walk) will help us accommodate people who are not covered by county funding. We will be able to work with them and get them into the proper treatments. So, that is how these funds will be used.”

McAlister said services are decreasing in the area rather than increasing so events like this are more important than ever.

In its beginnings, serving East County, McAlister said the organization has increased its reach to South Bay, with an outpatient program on Third Avenue with homelessness services attached to that program, and an adolescent outpatient program.

“We go out into the community, work with the Homeless Outreach Teams,” she said. “We have Work for Hope, funded by private foundations where homeless men and women clean up the parks and other public facilities. We give them a stipend and try to engage them into treatment. We have a program for women and children for women in treatment and need to bring in their children for childcare while they are in treatment.”

McAlister said it also said it also provides hotel rooms for the homeless during inclement weather. Men, women, and pets. “We are doing quite a bit in South Bay,” she said.

McAlister said it has more than 27 different programs in 24 different locations, including a program in downtown San Diego, when people get disruptive from drinking too much. They are dropped off at its facility for four hours instead of going to jail, along with engaging the homeless in getting treatment when necessary.

“We have grown a lot,” she said. “I am very fortunate to have a dedicated staffing. Not only at our corporate office, but our programs. It really takes dedication and compassion to work with the least of. And that is who we work with.”

McAlister said the Walk is a fundraiser, but it is more than that.

“The bigger part for me is to remove the stigma that recovery does not work,” she said.