Six teams from the Metro Conference earned berths in this year’s San Diego Section boys water polo playoffs — four from the Mesa League and two from the South Bay League.

The Division I and Division III brackets got under way Tuesday with first-round elimination match-ups.

South Bay League champion Otay Ranch got a big boost in the second half of its Division III matchup against seventh-seeded Pacific Ridge in a game played at Southwestern College but the 10th-seeded Mustangs (11-8) came up short by an 11-7 score to the Firebirds (9-10).

Division II teams are scheduled to hit the water on Wednesday in first-round play. Sixth-seeded Eastlake (16-11) will host 11th-seeded El Camino (20-12) in a game at 8 p.m. at the Southwestern College pool.

Bonita Vista (18-11) received the No 3 seed in Division III and will engage sixth-seeded Francis Parker (17-9) at 6:30 p.m. on Friday in a quarterfinal match-up while Mar Vista (20-7) received the No. 2 seed among Division II teams and will play the winner of Wednesday’s elimination game pitting seventh-seeded San Dieguito Academy (16-10) and 10th-seeded La Costa Canyon (10-17) at 12:15 p.m. on Saturday.

Mater Dei Catholic received four goals from David Brown and three goals each from Nick Salisbury and Juan Hernandez in the win over Clairemont.

“It was an exciting environment with a lot of people on deck,” Crusader head coach Robin Bregman said. “We took a 4-1 lead and in the third quarter they got back to 8-6.

“The game was officiated well. We came to play. We got an early lead, played defense and controlled the clock.”

“I’m happy where we ended up,” Bonita Vista head coach Betty Alexander said. “I think we earned that No. 3 seed. I’m hoping we perform well enough against Francis Parker in the quarterfinals to get to (second-seeded) Helix (in the semifinals).”

Making a splash
Otay Ranch won what is believed to be its first boys water polo league championship in school history this season as the Mustangs finished 7-1 in South Bay League play — one game ahead of second place Olympian.

Otay Ranch was making its first appearance in the section playoffs since 2016, and postseason inexperience on the part of the team’s younger players might have been a factor in the team slipping behind the Firebirds 4-0 at the end of the first quarter and 7-0 late in the second quarter.

But the Mustangs proved to be a different team in the second half, rallying to outscore Pacific Ridge 6-3 in the final two quarters.

The 4-0 deficit in the first quarter turned out to be the deciding factor in the game.

“With us coming back, that was solid,” she said. “I don’t think the boys had gone to CIF since 2016. My team is so young, I was happy to get a league championship and go to CIF. That was an accomplishment.”

Pacific Ridge created momentum from the onset of the game. Leander Rikkers scored 20 seconds into the contest to stake the Firebirds to a 1-0 lead. Pacific Ridge made the score 2-0 with a goal by Ryan Greenlee 30 seconds later. Andy Colmignoli scored with 2:30 to play in the opening quarter to increase the lead to 3-0.

Rikkers scored his second goal of the quarter with 1:42 left to make the score 4-0.

Rikkers picked up his third goal of the game with 1:20 elapsed in the second quarter to lead 5-0.

Luc Clark scored his first goal of the game with 3:55 to play in the quarter to make the score 6-0 and Colmignoli notched his second goal of the game to increase Pacific Ridge’s lead to 7-0.

Mustang supporters finally had a chance to cheer when Jake Medrano snapped Pacific Ridge’s shutout bid with 1:11 remaining in the second quarter. However, the Firebirds responded with a goal by Greenlee with just seven second left in the first half to lead 8-1.

Otay Ranch broke for a halftime strategy session and came back with renewed purpose.

The Mustangs went right to work while facing the daunting task of chipping away at a seven-goal deficit by grabbing instant momentum on a goal by Medrano just 27 seconds into the third quarter.

Soren Engstrom responded with a goal 17 seconds later to push Pacific Ridge in front 9-2. But Otay Ranch squarely got itself back in the game by reeling off two unanswered goals to narrow the Firebird lead to 9-4.

Medrano scored both goals to end the third quarter.

The Firebirds scored the opening goal of the fourth quarter to lead 10-4. But the Mustangs kept charging. Julian Orozco scored with 2:23 to play in the game to trim the deficit to 10-5.

Greenlee scored 13 seconds later to make the score 11-5. Otay Ranch scored the final two goals of the game — one each by Medrano and Orozco — but ran out of time in an effort to complete their spirited comeback.

The Mustangs were clearly the better team in the water during long stretches of the second half.

“Pulling the team out of the water helps the players rest their minds and get their heads in the game, Lechner said. “Our captain Jake Medrano is very inspirational. He helped rouse the troops.”

Medrano led the Mustangs with five goals while Orozco finished the game with two goals.

Rikkers and Greenlee led Pacific Ridge with three goals each while Colmignoli and Clark each scored two goals.

Evan O’Leonard manned the cage for the Firebirds while Caleb Lee came up with several big stops in the cage for Otay Ranch.

Francis Parker, a second-year program, advanced to meet Bonita Vista in Friday’s quarterfinals after sinking 11th-seeded Oceanside (7-22) by a 13-4 score in Tuesday’s opening round.

Playoff schedule
Semifinal games are scheduled Monday, Nov. 5, at 5:45 and 7:30 p.m. in Division III and Tuesday, Nov. 6, at the same time in Division I, both at La Jolla High School. An Open Division quadruple header is scheduled Wednesday, Nov. 7, also at LJHS, followed by the Division II semifinals on Thursday, Nov. 8.

The Titans, if successful, would avoid meeting either top-seeded Steele Canyon or second-seeded Mar Vista quite so early in the playoffs.

It was a golden opportunity for success, but one that did not meet expectation as Eastlake, after valiantly fighting back from a two-goal deficit at halftime to take a one-goal lead into the fourth quarter, saw their chances of advancing in the playoff bracket slip beneath the water as the Wildcats, in turn, rallied with three unanswered goals in the final stages of the game to post an 11-10 upset victory.

Sokil admitted it was a frustrating loss for his team, which had higher hopes for postseason competition.

He suggested his team needed to play with more of a sense of urgency in the contest.

Ill-timed turnovers, some of them unforced, helped dim the team’s chances to pull out a victory.

“The frustrating part is losing due to mistakes we were making at the start of the season, not new mistakes,” Sokil summed up. “(In the fourth quarter) we were forcing passes into multiple defenders, and that was a huge problem.

“Hopefully, Mar Vista can carry it forward (for the league). I think they can.”

Mar Vista (18-5) will play 10th-seeded La Costa Canyon (10-13) in Saturday afternoon’s quarterfinal round after the Mavericks upset seventh-seeded San Diegiuto Academy (16-13) by a 9-8 scored in Wednesday’s opening round.

The winner of that match-up will advance to meet the San Pasqual-El Camino winner in next week’s division semifinals.

The Division II championship game is set Nov. 10 at LJHS.

Wednesday’s Halloween playoff game at Southwestern College proved to be a battle fought with tooth and nail.

El Camino scored the first goal, which Eastlake matched. However, the Titans were forced to play catch-up from there as the Wildcats assumed a 3-1 lead.

Eastlake battled back to tie the game, 3-3, on goals by Logan Eyer and Kaden Nicholls but El Camino went back in front on a goal with 21 seconds left in the first quarter when Titan goalie James Derrod was unable to steal the ball in front of the cage and Isaac Du capitalized on the opportunity for the Wildcats.

Jake Rose came to the rescue with a clutch goal with just 4.07 seconds left in the opening quarter to tie the game.

Rose then scored on a five-meter penalty shot 32 seconds into the second quarter to give Eastlake its first lead of the game at 5-4.

But El Camino ended the first half on a rush, scoring three unanswered goals to lead 7-5 at the break.

The Titans dove back into the Southwestern College pool with a renewed sense of purpose and tied the game, 7-7, on goals by Giancarlo Valverde and Diego Scheitt.

Valverde deposited a shot into the top far corner of the care from the perimeter with 4:10 left in the third quarter; Scheitt scored on a penalty shot with 1:54 to play in the quarter.

Eyer scored his second goal of the game on an ensuing penalty shot with 1:54 left in the quarter to push the Titans in front 8-7.

But the pesky Wildcats wouldn’t go away.

El Camino tied the game on a six-on-five goal by Nathan Swank after the ball rebounded off the post. The goal tied the game with 5:59 to play in regulation.

By this point the game was beyond exciting, with any number of shots (or corresponding saves) determining in which direction the outcome would be determined.

Du scored with 3:54 to play to give El Camino a 10-8 lead but Scheitt quickly helped the hosts bounce back when he deftly converted a pass from teammate Jeremy Redden.

The Titans hit a run of bad luck in the dying minutes, caroming the ball off the post and crossbar to keep the Wildcats in the lead.

El Camino scored the back-breaking goal with 52 seconds left as Du notched his sixth goal of the game to put his team up 11-9.

Eastlake battled to the final whistle and a backhand shot by Rose found the target with 3.96 seconds left on the clock.

But it was too little, too late for the Titans.

El Camino ran off the final seconds and began celebrating when the final horn sounded.

“We had a good season,” Crosswhite said. “One of our players had a broken hand for much of the season and we had to play without him. We were ranked as high as seventh two weeks ago. I think we were a little higher than our seed. But Eastlake is a great team; they played really well.

“We’re a young team. We only have three seniors, and we start a freshman. It was great to see that we held our composure. We were ahead by two goals at the half and then down by a goal entering the fourth quarter. I was proud of the guys in how they showed they were able to overcome that.”

Derrod finished the game with 14 saves to cap an otherwise record-setting season. The junior goalie set a new school record for career saves in the final stretch of the regular season.

Du led all scorers in the game with six goals while Swank scored three goals. Ryan Bowe-McLeon and Luke Messerschmitt each had one goal for El Camino.

Rose paced Eastlake with three goals while Nicholls, Eyer and Scheitt each scored two goals. Valverde had the other Titan goal. 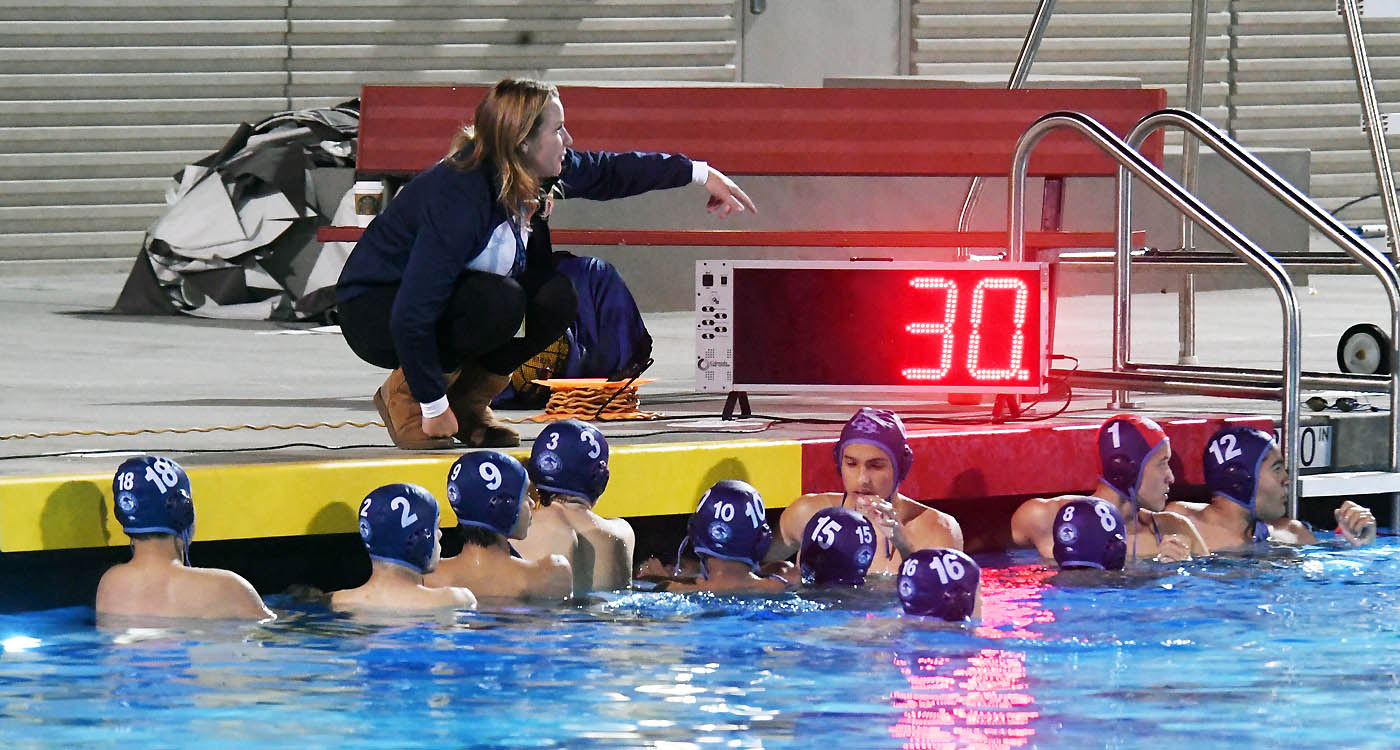 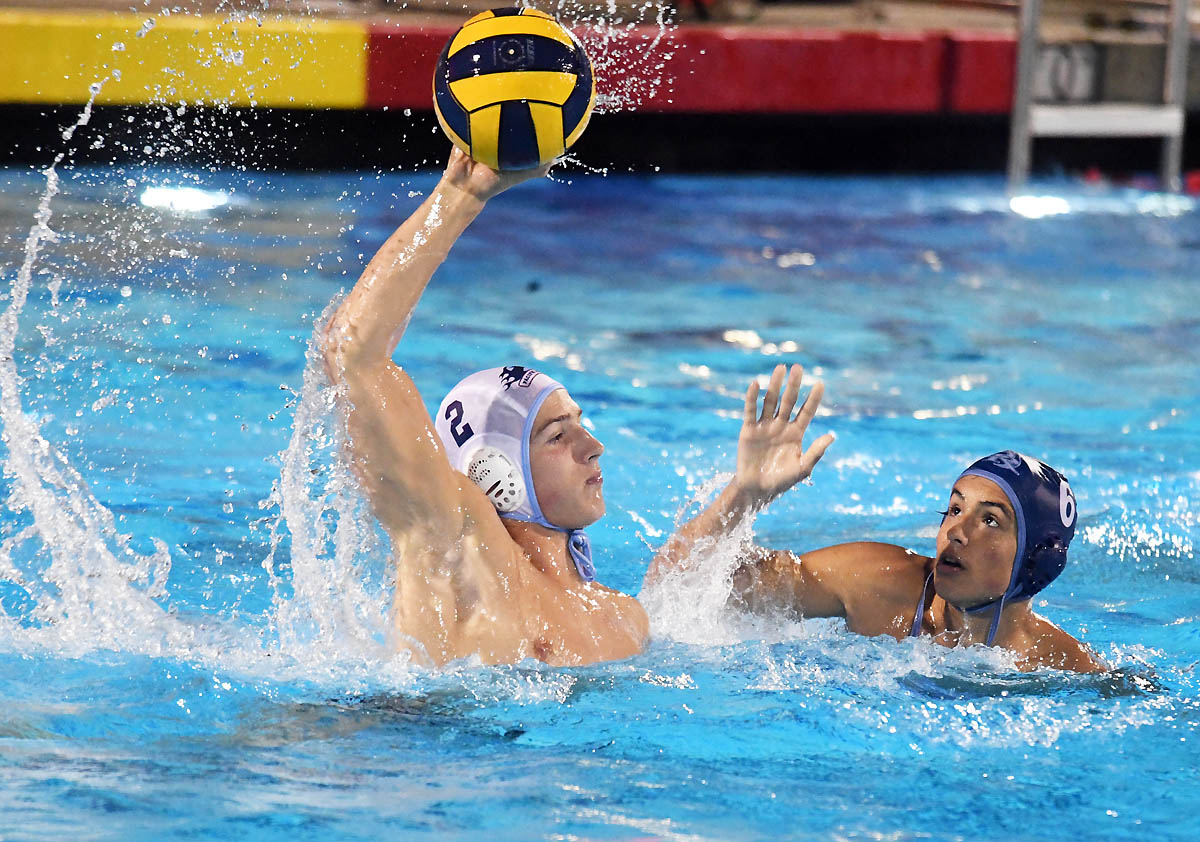 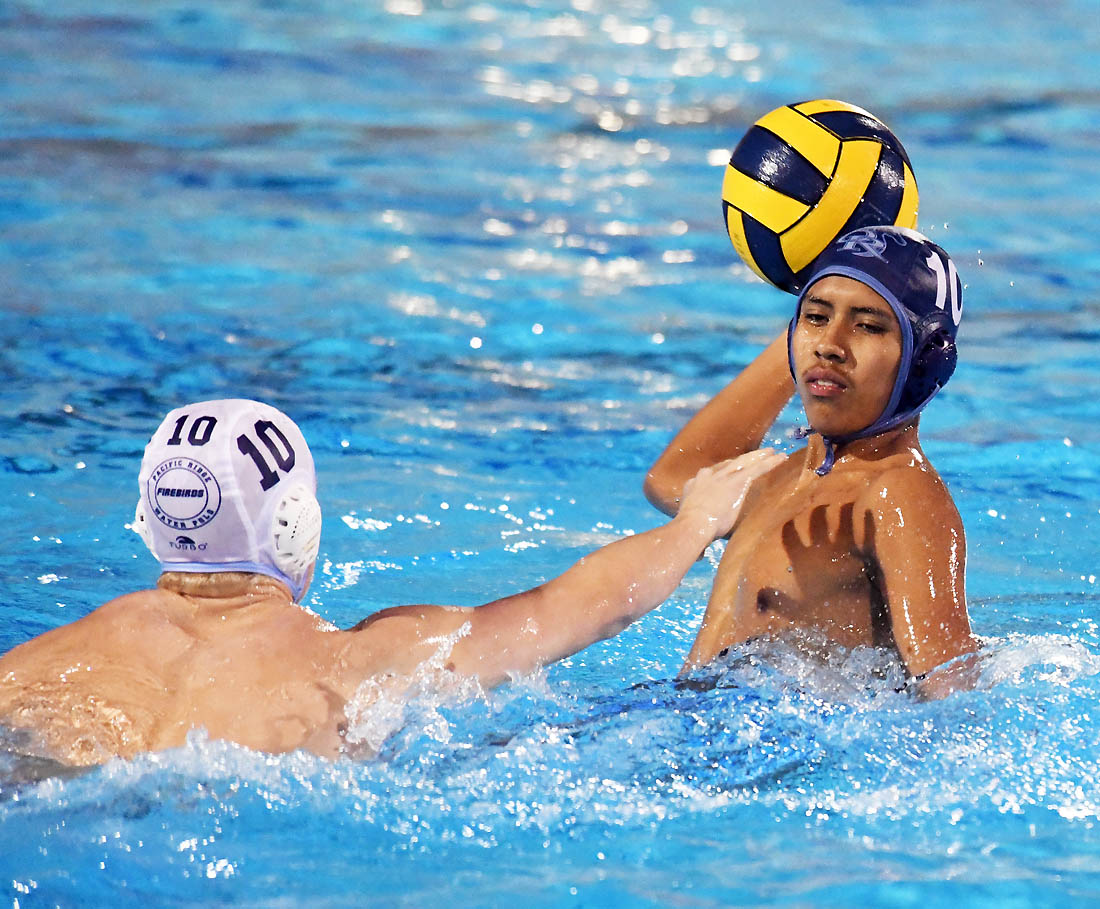 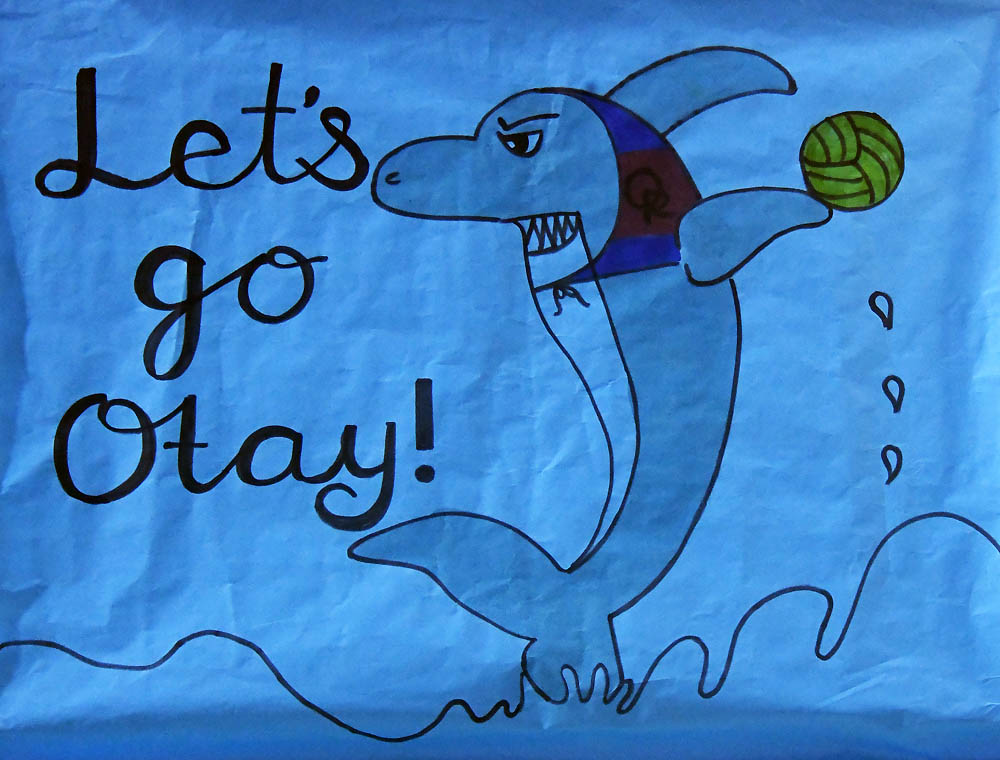 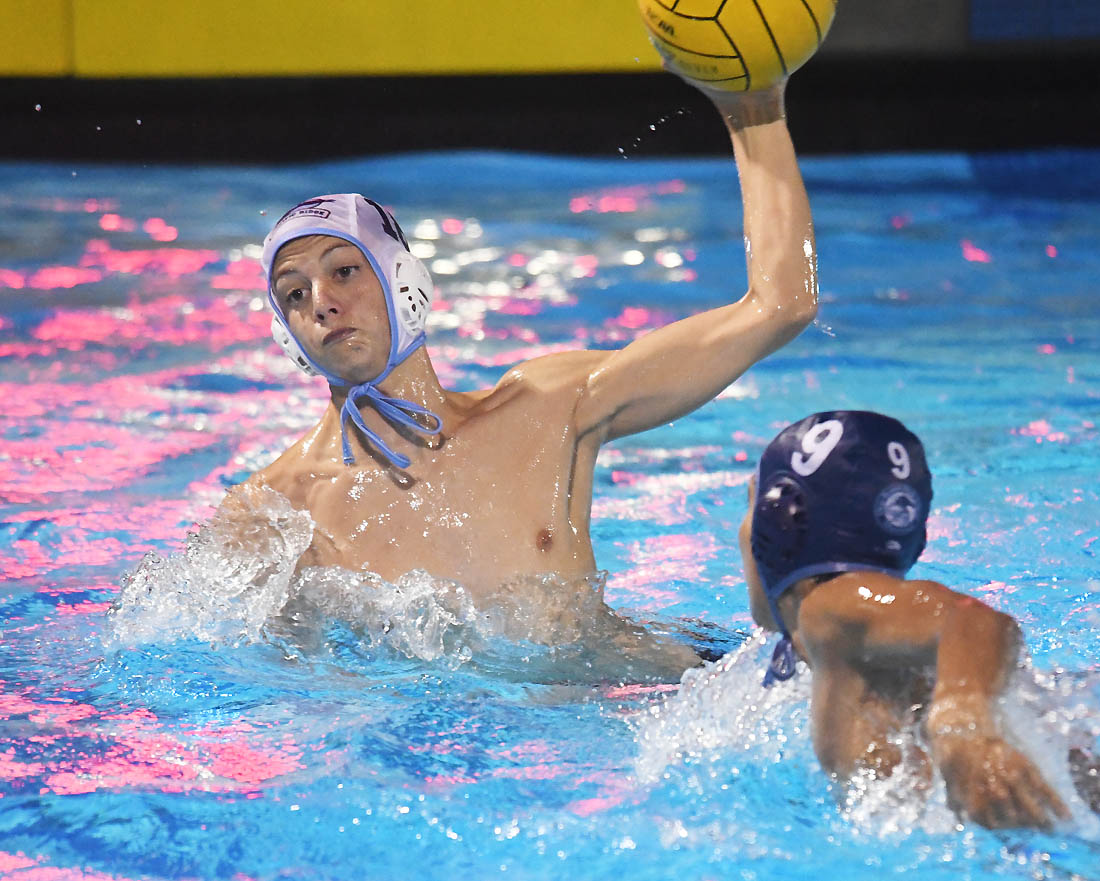