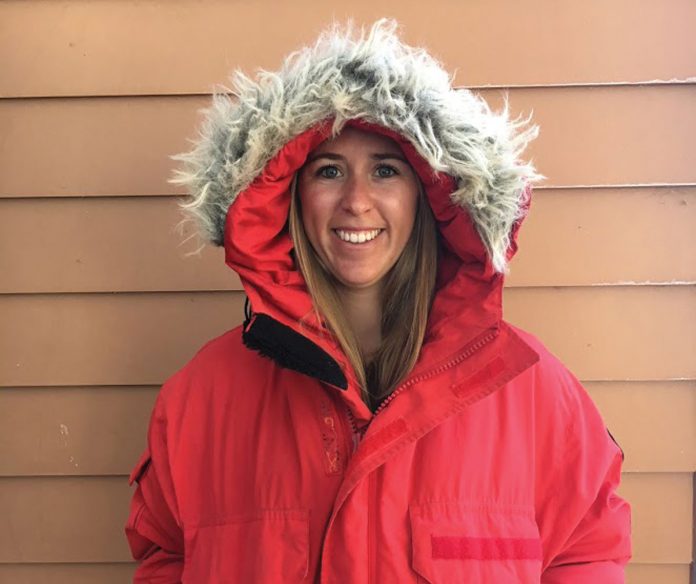 When the science teacher had the opportunity to go to the South Pole recently as part of a research expedition, she could not help but bring her experience to her students.

“I’ve always been a teacher who has always wanted to teach away from just the textbook,” she said. “I want to teach from personal experiences.”

Anderson, 28, was one of 11 teachers selected for the PolarTREC program, a program through the National Science Foundation and the Arctic Research Consortium of the United States in which teachers in the United States connect with scientists to participate in hands-on field research experiences in the polar regions.

Of the 11, Anderson was the only one assigned to the South Pole for a four-week research expedition, leaving on Nov. 26, 2017, returning home Jan. 3, 2018.
Although she spent four weeks at the South Pole, she was gone for six-weeks, allowing for a total of two weeks travel time.

Anderson, who has been teaching for five years, was away from the classroom for three weeks as a substitute teacher filled in for her, but she stayed connected with her students via live webcasts.

PolarTrec hosted several events for students across the country to understand the work she was doing in the South Pole.

“There were multiple students in multiple classrooms who got to hear about the research that we were doing,” she said.

She also documented her adventure for her students in a webjournal at www.polartrec.com.

The teacher joined an international team of astrophysicists as they sought to find neutrinos in Antarctica. Neutrinos, known as ghost particles, are tiny subatomic particles that can be found in ice.

Anderson and her team at the South Pole Neutrino Observatory worked on neutrino detectors called IceCube that are buried almost two miles into the ice to record the interactions of the massless subatomic particle.

Neutrinos have no charge to them, but when they interact with a neutron or a proton, they give off a photon- a wave of light. Optical detectors capture this light and can tell scientists where a neutrino came from in the universe.

Anderson also worked with a new deployment team called the Askaryan Radio Array putting radio antennas into the ice as the antennas will detect high energy neutrinos.
Anderson said if scientists can tell where these high energy neutrinos are coming from they  might learn more about black holes and supernovas.

By the time she had left the South Pole, Anderson said the newly implanted detectors were up and running.

The detectors search for neutrinos from astrophysical sources like gamma-ray bursts and exploding stars.

For the High Tech High Chula Vista teacher, going to the South Pole was a trip of a lifetime.

While there she stayed in a room at the Amundsen-Scott South Pole Station.

Anderson said she usually worked 12 to 14 hours a day, Monday through Saturday, and an occasional Sunday. Her free-time was spent playing volley ball in the gym, playing golf or disc golf on the berms outside the station and reading in the greenhouse.
Since she has returned home, Anderson said she is planning class assignments and building classroom projects around her research.

“It’s just so awesome that they (her students) are excited about this research and that they want to learn about it,” she said.