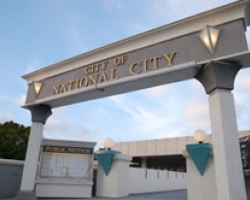 The union representing National City police officers reportedly spent part of this week soliciting support from community groups and elected officials to show solidarity with the city’s law enforcement officers at a press conference planned for next week.

The letter goes on to say that council members Alejandra Sotelo-Solis and Mona Rios will issue a press release expressing support for the police department to “address inaccurate statements recently made in the media regarding our officers.”

On July 24 community members and activists interrupted a city council meeting demanding that the death of Earl McNeil, who died in June after being arrested by police in late May, be placed on a future council agenda.

Six protestors were arrested that night. When police cleared council chambers and City Hall  they encountered dozens of law enforcement officers from various county agencies, some in protective helmets and wielding batons, lined up outside.

The July 24 council meeting was the fourth consecutive meeting disrupted by protestors and National City police have received intense public scrutiny for the way they are handling the investigation into McNeil’s death.

Sotelo-Solis said while the press conference is an opportunity for the community to lend their support to the department she will be asking people to “respect the process” and express that that they believe in a “thorough process and accountability.”

That’s a similar message that she and Rios jointly put together last week.

Sotelo-Solis and Rios were the only two council members who voted in favor of placing McNeil’s death on the agenda.

Although they will be joining the police union in a press conference, both councilwomen said they are not walking back their support of McNeil and will continue seeking answers into the mentally ill man’s cause of death.

Councilman Albert Mendivil, one of two council members who opposed placing McNeil’s death on a future agenda, said he did not receive an email from the police union asking for his presence at the press conference next week.

He called Sotelo-Solis’ and Rios’ invitation by the police political. Rios is seeking re-election into her third-term while her colleague Sotelo-Solis announced her mayoral candidacy earlier this year.

Mendivil said he found it “weird” that Sotelo-Solis and Rios were invited guests at a police press conference when they have not shown their support for the agency in this matter.

“They already showed their colors,” he said. “There’s nothing they can do to erase (the statement that they made) at the council meeting. It’s already out there.”

McNeil family supporters have disrupted four consecutive council meetings demanding answers into the events leading up to his death. They want the release of full audio and video recordings of the event, the full medical examiner’s report, and an outside investigation into the matter. They have also asked for the resignation or firing of the police chief Manuel Rodriguez.

Community Activists Tasha Williamson has been one of the activists involved in seeking answers in the McNeil death.

Williamson said she was not told about the police union’s planned press conference, which she said is not a way to build trust with community members.

“If they want community support than they should listen to the community that is being harmed the most by them,” she said.

She recommends that police do more than host press conferences and a National Night Out to establish trust in the community. She said National City police could use a community- oriented policing model.

As far as having two council members planning to attend the police union’s press conference Williamson said, “They’re politicians and as politicians you have to represent all people” but she hopes that Sotelo-Solis and Rios do not “lose sight of representing the people who are closest to the pain and who are most brutalized by the National City Police Department.”

Sotelo-Solis said the medical examiner’s report will be coming out soon, which should provide some clarity into McNeil’s death.

“I think both sides want answers,” she said. “And I know the (police department) feels that way as well.”

The union letter, which was emailed to groups such as Kiwanis and Rotary clubs, closed with examples of quotes supporters could use in defending the department, including: “We believe allowing the process to work is the right thing to do.” “We the community, have an outstanding relationship with our police department and believe the investigation will show the facts of the event.” and “We ask for restraint, calm and patience while the process is completed.”

The press conference, which had been originally suggested for Tuesday, will take place at 10 a.m. Monday at Las Palmas Park, Rios Said.