A Chula Vista man has been ordered to stand trial for three murders that include a missing girlfriend from 1992 and his wife and mother-in-law who died in 2010 near where their bodies were found in an apparently staged car accident in a ravine.

Richardson, 57, is suspected of suffocating his wife, Thao Richardson, 39, and stabbing her mother, Phan Lai, 72, with a sharp blade in June 2010. Their bodies were found near an overturned Honda off state Highway 67 in Lakeside.

Deputy District Attorney Kurt Mechals said the car was found in park and there were no skid marks on the road where it had driven off. The injuries to both women were not consistent with being ejected from the car, he said.

Phan Lai had a huge cut to her throat with multiple head injuries while Thao Richardson had no obvious injury. An autopsy showed she was likely suffocated. Mechals said no airbags deployed in the vehicle and blood from both victims was found in the trunk.

After hearing the three-day preliminary hearing, El Cajon Superior Court Judge Herbert Exarhos also ordered Richardson to stand trial for the murder of Jovita Collazo, 38, his former girlfriend who vanished on April 30, 1992, and is presumed dead.

Collazo was living with Richardson in National City at the time and “just vanished,” said Mechals. She is presumed dead and her relatives have not heard from her since she disappeared after going to a store.

The DA’s office has not yet decided whether to seek the death penalty against Richardson if he is convicted under the special circumstance allegation of multiple murders. Richardson will next appear in court on July 14 to have a trial date set.

California Highway Patrol officers and sheriff’s deputies testified the accident scene appeared to be staged. There was no key in the car’s ignition when it was found on June 25, 2010. 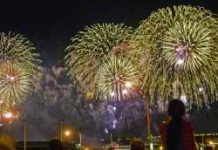 Fourth of July pyrotechnics to be found countywide

Fourth of July pyrotechnics to be found countywide