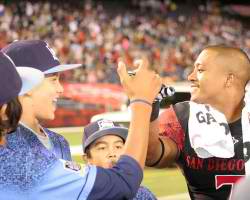 The Sweetwater Valley Little League 12U all-star team crammed a lifetime of memories into a two-month span, including a trip to the Little League World Series in South Williamsport, Pa. The season isn’t over quite yet.

Now it’s time for the team to be feted by a very adoring — and appreciative — community.

Sweetwater Valley’s boys of summer were special guests at last Saturday’s San Diego State-University of San Diego college football game at Qualcomm Stadium. The team, which placed third among U.S. squads at last month’s LLWS, was introduced prior to the 40th annual KGB Sky Show fireworks spectacular in front of 48,000-plus fans.

On Tuesday, the team was special guests of the Padres.

“It’s a dream come true for me and my team,” said SVLL first baseman/pitcher Jacob Baptista of all the hero worship.

“Some of us went to a Padre game before the one on Tuesday just to watch the game and there were a lot of people coming up to congratulate us,” said SVLL pitcher Dante Schmid, who picked up two wins on the mound and slammed three home runs back in Pennsylvania.

At the conclusion of the football game, two SDSU players came over to personally congratulate the SVLL players on their achievement. Schmid and his teammates were all smiles after exchanging a high-five with SDSU  senior defensive back J.J. Whitaker.

There is more to come.

The city of Chula Vista is planning a welcome home ceremony for the team on Tuesday, Sept. 15, at City Hall, starting at 5 p.m.