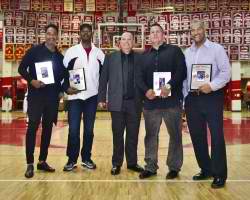 All four were presented with plaques during the halftime ceremony on SuHi Alumni Night.

There was a lot of red and gray pride on parade — both in the stands and on the court.

“This is something that was overdue,” current SuHi head coach Jesse Aguirre explained in regard to the recent creation of the program’s Boys Basketball Hall of Fame.

“When I became coach seven years ago, we retired Michael Pitts’ number and honored him. Then we honored (former coach) Gary Zarecky.”

Pitts, the 1979 San Diego Section Player of the Year, ranks sixth in the section record book for career rebounds (1,277) and second for most rebounds in a single game (38).

Zarecky, who later went on to coach at USIU after compiling a 236-110 record at Sweetwater during a 13-year stint, spoke at Pitts’ jersey retirement ceremony in 2011.

The Hall of Fame was quickly born thereafter.

All four players called it an honor to be included in this year’s class, noting they were pleased to be included among some of the program’s greatest players.

And there have been many.

Rico competed on Sweetwater teams that went undefeated in league play during his playing days. “I remember playing in front of a packed house every game, “ he said.

He created some personal notoriety by recording 40 slam-dunks during his high school career.

“Nobody back then thought a Hispanic kid from National City could dunk a ball,” recalled Rico, who earned honors as the Metro League Player of the Year for his exploits on the hardwood. “But growing up in National City watching these great players on Sweetwater play, all us kids thought we had to be able to dunk the ball to be on the varsity team.”

Siragusa wrote his name in the Red Devil history book both on the basketball court and on the football field. As the team’s quarterback, he was part of the school’s legendary football record streak of 36 consecutive victories — still a San Diego Section record.

“I never lost a game when I was at Sweetwater,” he recalled.

Lee was a member of Sweetwater’s first CIF championship team (Class 2A) in 1980 under Zarecky.

Last Saturday’s game ended on a thrilling note as Neilryan Pangilinan scored on a lay-up with 20 seconds to play to break a 60-all tie. The Spartans (8-15) had deadlocked the non-league contest with 34 seconds left in regulation.

Chula Vista made up a five-point deficit in the final minute to tie the score. The Spartans then called a timeout with 1.8 seconds to play in an effort to win the game on the final shot. The visitors inbounded the ball and did get off a final shot but it bounced off the rim wide.

“All I wanted to do was to get it in the hole because my jump shot wasn’t working,” Pangilinan said.

Sweetwater improved to 10-8 on the season.

“We kind of let down toward the end after winning such an emotional game against San Ysidro the night before,” said Aguirre, who picked up his 100th career win as SuHi head coach in December. “But a win is a win and we’ll take it.”

“I’m glad we won but I thought we could have won by more points,” Pangilinan said.