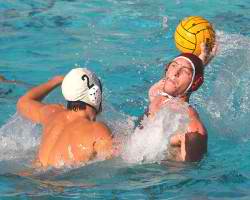 The community college water polo season is quickly winding down, and the Southwestern College men’s team still has hopes of making a bold statement before it is finally finished.

The Jaguars saw their season record dip to 6-12 overall, 3-5 in Pacific Coast Athletic Conference play, after surrendering 14-13 decision to the visiting San Diego Mesa Olympians on Wednesday, Oct. 22. The Jaguars led 10-5 at halftime and appeared to have the game – and a possible No. 3 seed in the upcoming conference championship playoffs – in the bag.

But the Olympians ramped up the defensive pressure in the second half and stormed out of halftime with five unanswered goals to tie the game and, in the process, change the flow of momentum in the important PCAC contest.

“We needed to beat them by six goals to get the No. 3 seed,” SWC head coach Jorge Ortega explained. “Now, we’ve got to play Miramar in the No. 4/No. 5 play-in game to get into the semifinals.”

Defending conference champion Grossmont defeated Palomar, 15-9, on Oct. 15 to zero in on wrapping up the No. 1 seed for this year’s PCAC finals, scheduled Nov. 7-8 at Miramar College. The Griffins, who improved to 10-6 overall, 5-1 in PCAC play, following the big win over the Comets, close out regular season play with an Oct. 29 game at San Diego Mesa.

The Olympians (13-8 overall) are currently vying for the No. 2 seed with a 5-2 conference record. Palomar (11-8 overall) sits right behind them with a 4-3 PCAC record. The Comets close out regular season play with an Oct. 29 home match against Miramar.

Miramar (0-5, 2-14) will be the fifth seed and meet Southwestern in the opening play-in round.

The Jaguars have defeated Miramar twice this season, including a 19-7 victory Oct. 15 in the Jets’ pool.

If SWC had been able to seize the No. 3 seed, a rematch with either Palomar or Mesa would have been interesting. The Jaguars upended Palomar in an exciting overtime win on Oct. 8 at home.

Southwestern carried all the early momentum in Wednesday’s game, leading 4-1 at halftime before moving out to a five-goal lead at halftime.

After the Olympians tied the score, 10-10, on a goal by Brendan Michie, Clinton Golder rescued the hosts with a six-on-five man-power goal to put the Jags up 11-10.

But the lead proved short-lived as Mesa responded with goals by Bryan Bare and Jesse Reiling to go in front, 12-11, and Bare added a six-on-five goal to increase the lead to 13-11.

But Golder came back to score two huge power play goals to even the score with 4:33 left in the quarter.

From there, the Olympians made all the plays when they counted.

Armani Antonellis put Mesa up, 14-13, with a six-on-five marker. The game likely turned on the next scoring opportunity when Southwestern drew a five-meter penalty shot. Nick Howard, SWC’s leading scorer and one of the top scorers in the state, took the shot but Olympian goalie Brandon Jack guessed right and got a hand on Howard’s shot to deny the Jags’ the equalizing goal.

Jack also came up big when it counted by stopping a pair of point-blank shots.

“At the end, it was one of those things when you sense the pressure and you rush things when taking shots,” Ortega said. “We worked for that five-meter. If we had made it, I think it would have changed the momentum in the game in our favor. But their goalie came up and got it.

“We had our chances, we just didn’t finish them. That’s what it came down to.”

Ortega estimates his team has about seven games left in its season, including next weekend’s Saddleback tournament and the conference finals. The Jags could get in as many as three games in the PCAC championships.

It is a significant in Wednesday’s loss to Mesa that both Howard and David Carroll, the team’s top scorers, were held to just two goals each in the game.

Howard had led the scoring parade in the latest win over Miramar with six goals while Santoyo had three goals and Carroll, Lizarraga and Golder each were credited with two goals. 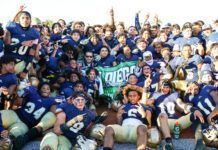 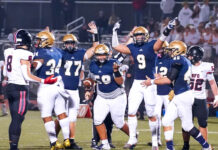 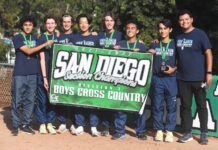