Last Friday’s inaugural Ian Cumming/Tim Latham Invitational at Rohr Park looks to have combined the best elements of its two predecessor events: the Mustang Invitational and the South Bay Invitational.

The former events were longtime staples for local runners to step off the cross country season.

The new event looks to do the same. By funneling two events into one certainly made for an impressive debut.

Forty schools and more than 1,300 runners participated in last Friday’s invitational, including 12 of the 13 schools in the Metro Conference.

Veteran official Al Dandridge, a member of the San Diego County Sports Officials Hall of Fame, was on hand to start the meet.

“The nicest thing about today is having some of the best coaches in San Diego present,” explained Otay Ranch coach Julian Valdez, who served as meet co-director. “Both Ian and Tim were present. It was a solid event, and we had great weather.”

Five divisions were contested, with two races in each division for a total of 10 races on the day. The Mustang Division featured smaller programs while the Red Devils Division spotlighted larger programs.

Sophomores Robinson (13:37.22) and Wimbish (13:37.51) crossed the finish line in near simultaneous fashion to secure first and second place.

The five-person spread among EHS scorers was just 20 seconds.

“The JV girls were great, just impressive,” EHS coach David Koopman said in praise. “They should be running varsity but our team is so strong. They’re varsity-caliber runners but they’re running JV.”

Young and talented seems to define this year’s Titan team. 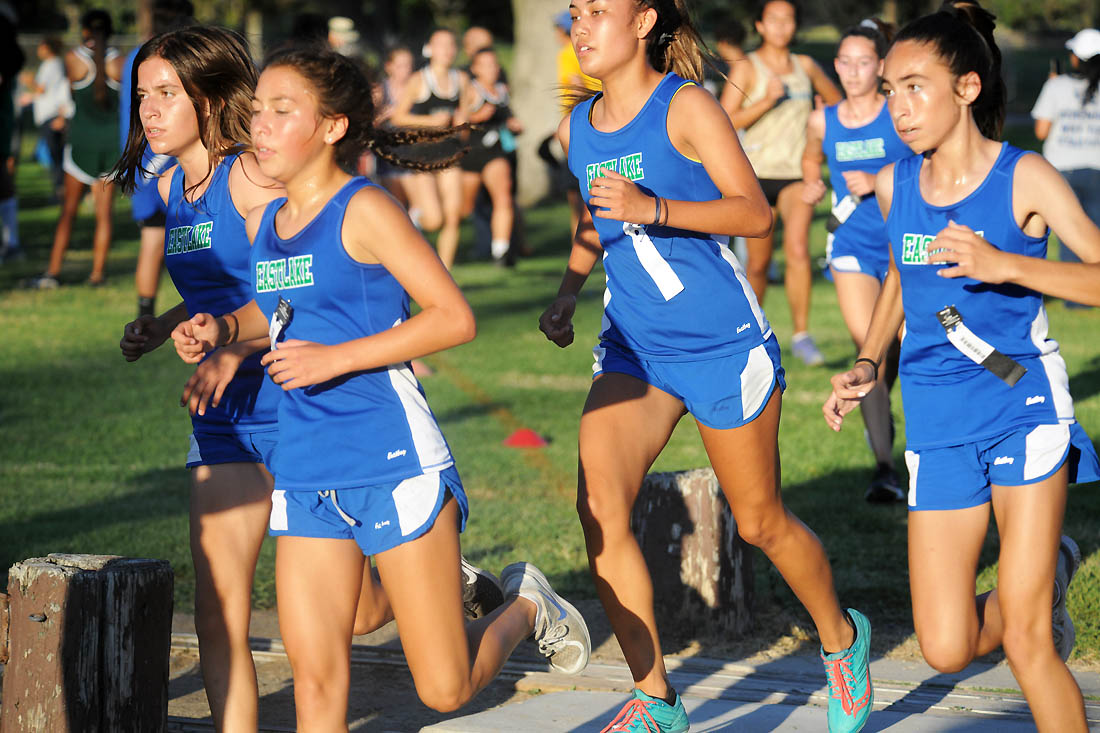 Point Loma won the team title with 56 points, followed by Eastlake with 93 points and Ramona with 101 points.

Expectations are high for the varsity group, Koopman said. “We’ve had individuals qualify for the state meet in the past but we’d like to qualify as a team this year,” he said.

Improvement seems to be occurring on the boys side of the program.

The Mustangs finished with the near perfect top score of 16 points to easily best runner-up Scripps Ranch (48 points).

Otay Ranch sophomore Austin Parise finished sixth in 15:15.05 to give the Mustangs five of the top six finishers in the 204-deep race.

The Mustangs finished a close second in the boys varsity race with 85 points to 81 points for team champion Scripps Ranch.

“We’re returning five of our top seven boys — we have a strong top six,” Valdez assessed. “We’re hungry. We really want to compete.”

Bonita Vista finished fourth in the division with 123 points, followed in order by Sweetwater (138 points), Olympian (141 points) and Eastlake (161 points).

“We are a senior heavy team on the boys side and about half and half on the girls side,” SuHi coach Jaime Romero said. “We’ve added many miles to our workouts over the summer and it’s paid off. The boys really run well together. They’re shooting for a goal at the end of the season and we’ll see where that takes us.”

Hilltop finished six points ahead of Mar Vista to secure the runner-up position behind team champion Francis Parker in the boys frosh/soph division.

Nicole and Jimmy Byland are twins.

“It felt great to finish first at Vaquero — most of the time I was leading,” Jimmy said. “I wanted to hold on. When the others speeded up, I speeded up.

“I tried sticking with the first guy at Wolf Pack. I got in first and ran until the end.”

Tisnado passed Byland toward the end of last Friday’s race.

Nicole said her goal is to keep leading her team from the front, with a goal to break 17 minutes on the course.

Bustillos, who said she would like to continue her running career in both track and field and cross country in college, previously finished fourth in her division at the season opening Vaquero Stampede.

“My goal for cross country is to carry the team with me, go farther than last year,” Bustillos said. “I want to make it to state and enjoy the season with my cross country family.”

Raider Nation
Our Lady of Peace recorded a top score of 21 to win the girls JV Mustangs Division but Southwest edged Rancho Buena Vista by nine points to secure second place in the team standings.

High Tech High Chula Vista was among the smaller schools present at the meet but one of the more successful teams at the same time.

Prince, who has been running since

the second grade, qualified for the state meet in both cross country and track and field last season and has goals to do the same this season.

He is a two-time state meet qualifier in cross country and would like to close out his senior year with his team joining him on the trip northward as the Bruins move from the Division IV to the Division V level.

“I think this is the strongest chance to make state as a team that we’ve had in school history,” Prince said. “We were one of the smallest schools in Division IV but we’re right there in Division V. It’s exciting.”

Prince made a little bit of personal history for himself at last spring’s state track meet after winning the boys 800-meter race at the San Diego Section finals (1:55.11) and then recording the top prelim qualifying time (1:53.22) in the event at the ensuing state meet.

“State was fun,” Prince said. “The goal was a 1:54 to make it to the finals. I went out hard and was very happy with my time. It felt great to accomplish that. The next day my legs were tired. But 10th place at state … it was a great experience.”

Goals are to continue pushing boundaries. “I’m hoping to be a top runner in Division V cross country this year, hopefully the top,” he said.

Ramirez doesn’t expect to be far behind.

“It’s been Drake and I – one, two – since our sophomore year,” Ramirez said. “I’m definitely happy we’ve dropped to Division V. It offers us a better chance to qualify for state.”

San Ysidro junior Missael Felix finished third on the 5K course in 17:08.20, winning a duel down the stretch against Prince by two seconds.

Crawford, paced by race winner Byaombe Mioko (16:32.64) captured the team title by a two-point margin over Francis Parker, which was led by runner-up finisher Kenan Pala (16:58.28).

Mar Vista senior Carnell Jelks passed the leaders in the field in the second half of the boys JV Mustangs Division race to win with a time of 15:59.72. Crawford senior Yosia Mmbumba was second in 16:03.83, followed by San Ysidro junior Oscar Montellano in third place in 16:19.88.

Next up is the Mt. Carmel Invitational Sept. 21 at Morley Field.

Forester was the top East County place-finisher in the Red Devils Division at last Friday’s inaugural 40-team Ian Cumming/Tim Latham Invitational at Rohr Park in Chula Vista, finishing fourth overall in the 110-deep field with a time of 16:43.35 on the 5K course.

Point Loma junior Jake Richardson won the race with a breakaway time of 15:58.17 – a full 21 seconds ahead of runner-up Jose Galvan, a senior from Sweetwater. Scripps Ranch junior Giancarlo da Silva was third in 16:33.12.

Forester ranked among the leaders throughout the race.

The Highlander runner is shooting to become a two-time state meet qualifier after finishing sixth among individuals at last year’s San Diego Section Division I finals. He subsequently finished 69th out of 185 runners at the state meet in Fresno.

“It felt really great to make it as a junior,” Forester said of qualifying for last year’s elite state meet. “Knowing that I have one more year to go, it was a big confidence-maker.”

He seems to be running with a lot of confidence this year.

Forester stepped off the season by placing second among senior boys at the Wolf Pack Invitational Aug. 30 at West Hills High School. He finished the 2.1-mile course in a personal record 10:09 — eight seconds behind race winner Andrew Sager of El Capitan and one second ahead of third-place finisher Devin Provence of Grossmont.

The Helix harrier bettered his time by seven seconds from last year. His goal is to cut time throughout the season.

“I want to go to state one more time and get in the top 10,” Forester said in listing his goals for his senior year. “I want to win CIF this year in Division I. I think I have a good chance since I was sixth last year and most of the kids ahead of me were seniors.”

Garcia finished eighth among junior/senior boys at the season opening Vaquero Stampede in Lakeside on Aug. 24.

Garcia and senior Matt Henry are the top returners on this year’s Granite Hills boys team, which coach Walter Bueno said is in a rebuilding mode this season.

“We have four returners on the boys team,” Bueno said. “We have seven freshmen; five are looking to run on varsity this year.”

Bueno is a 2006 graduate of Granite Hills, competing in both cross country and track and field for the Eagles.

He called it “awesome” to coach at his alma mater.

“This is my fifth year with cross country, to be here is a joy,” he said. “To return and share what I’ve learned, and share my passion for cross country with a new generation is fantastic.”

Notes
Christian junior Alaina Zamorano finished first among varsity girls runners in the Mustangs Division at last Friday’s invitational with a time of 15:42.30 for 2.5 miles. She finished 21 seconds ahead of runner-up Rachel White (16:03.63) of Escondido Charter.

Valhalla finished third among boys junior varsity teams in the Red Devils Division, placing just three points behind second place Eastlake. Freshman Leonardo Talia was the top Norseman runner to cross the finish line in the 2.5-mile race in sixth place in 15:16.81. The race featured a total of 178 finishers.