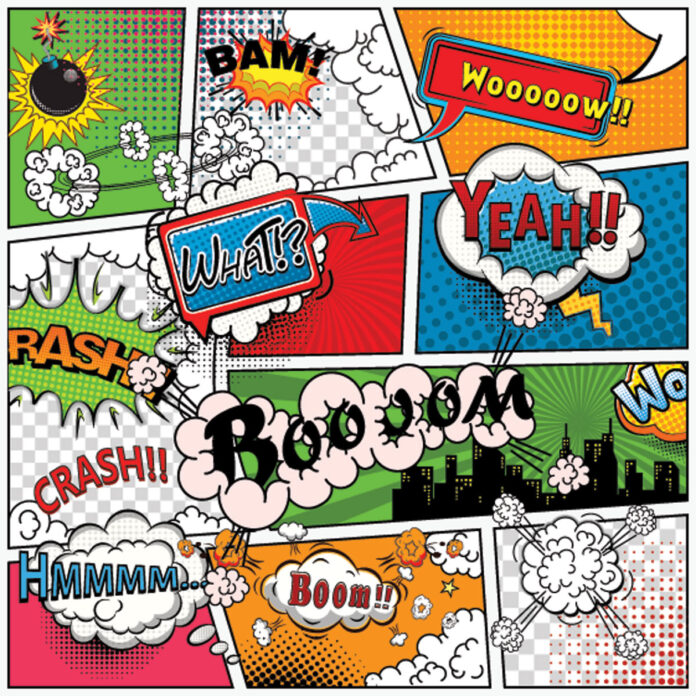 For the second year in a row Comic-Con International San Diego suspended its in-person event, an event that pumps an estimated $166 million impact to the regional economy, however, the online Comic-Con@Home returns this weekend July 23-25. In hopes that COVID-19 conditions improve, it is currently planning a smaller supplemental event on Nov. 28, Comic-Con Special Edition. With hundreds of workshops and panels available this year, it is interesting to know that SDSU has embraced the history and present of comics in history, integrated into its curriculum and has collected more than 100,000 in the library’s Comic Art Collection.

Professor of History Elizabeth Pollard is the co-founder of the Comics@SDSU working group, working in developing curriculum at SDSU, utilizing comics as historical sources and catalysts for historical change, and has first had experience on how students are responding to the growth of comics in curriculum.

“Comics@SDSU is a grassroots college faculty led initiative and what we are trying to do is developing curriculum, research and community interactions focused on comics, and the ability of comics to make a difference in the world to bring social change” she said.

Comics@SDSU meets three times a semester and talk about ways it is integrating comics into its courses. Faculty is working together to develop a comics study certificate, spearheading the development of brand new courses.

Pollard just began teaching a course History 157 Comics and History this past year, a course that is a baseline for the certificate program they want to develop. It looks at how comics have developed over time, going back to paleolithic cave paintings and how they were designed the same way as modern day comics. There is a new comic class that is going through the curriculum process this year, Graphic History.

“There is a big move in history in making comic retellings of historical events and historical argumentations,” she said.

Pollard said there are many comic courses in the works. A Religion and Comics course under development, an Afro-futurism course, a Chicano comic course being developed, Monga and Japanese history, comics for teachers’ course. Pollard said Art 296 is comics and sequential media and Art 343, both of which are about creating comics.

Pollard said Comics@SDSU has people that can talk authoritatively about comics about the things that are happening at Comic-Con@Home, Comic-Con International’s response to the COVID-19 pandemic.

“This gives people a chance to attend panels virtually that normally they would have stood in line for hours and hours,” she said. “Last year was pretty terrific. This year, it seems to be even better because they knew what was coming for a year. It is a very well organized series of virtual panels. Some are pre-recorded, some live. They have a host of different topics that they dig into ranging from pop culture, game playing, cosplay, comic creations, television shows.”

Pollard said since SDSU has comics and social justice, she said they were extremely excited about the panels that focus on teaching and learning with comics, comics for justice, Afro-futurism, diversity in comics, and “March,” focused on John Lewis’ career.

“We here at Comics@SDSU are excited in promoting the various panels at Comic-Con,” she said. “For normal people getting a ticket to Comic-Con is a great undertaking, but virtually the access to these panels is so amazing. We are so excited that our students and faculty will have access to its full range of programming.”

Pollard said the most interesting things she loves to teach students is that impulse to tell stories with images and the power of images to convey realities, arguments, feeling and emotion.

“As a historian, I am extremely interested in the history of the distant past. For me, someone who is looking at history over thousands of years, that impulse to tell stories through image is fascinating and I love showing that to my students.”

She said the second most interesting is how comic creators have dealt with social issues over the past 100 years, like wealth and equality, immigration issues.

“The social issues that turn up in the early 20th century are still being dealt with in different ways in modern comics,” she said. “Students get excited about tracing those changes over time, how the same medium is struggling with the same issues.”

“We have a circulating comics collection in the Comics Corner, sponsored by a very generous donor Jack Sword, an alumnus who is a comics collector himself,” she said.

“Many of the older and rare comics have come from him, along with monetary help in creating the Comics Corner.”

Jackson said most of its comics are in its special collections and archives, giving students the ability to go through them while in the library. We have things going back to the 1800s, early comics, political cartoons, but most of the collection is modern age, 1986 on. But there is also a large collection of Golden Age and comic strips from newspapers. Its archival selection mostly focuses on fandom and the history of Comic-Con.

“We have the Richard Alf papers, one of the cofounders of Comic-Con,” she said. “He was 17-years-old at the time. Many teenagers were involved in starting it, so it is a fascinating story. I was a PI on a grant to collect their oral histories, so there is a project called the Comic-Con Kids, Finding and Defining Fandom where they share their histories in creating Comic-Con.”

Jackson said it has a large collection of first tickets, promotional material, and swag that demonstrates the growth of Comic-Con.

“From a marketing perspective, some of that what people might call ‘junk’ is very valuable,” she said.

Jackson said the collection at SDSU began back in 2011, with about 1,700 items and now with over 100,000, it grew it at a rapid pace, which came primarily from donors.

“All of the things we are doing now on campus with comics grew out of having this fantastic collection and finding ways to use it with classes,” she said. “Whenever I teach a class in special collections, student get excited about it because it is different. The combination of words and art raises your learning and makes you have a better connection with what is being conveyed in the stories.”