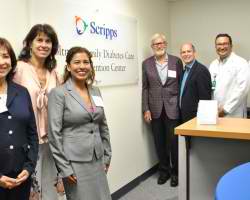 Scripps Mercy Hospital in Chula Vista is the new home of the Woltman Family Diabetes Care and Prevention Center, which will house education and research efforts focusing on Type 1 and Type 2 diabetes.

The 1,100-square-foot center, located at 450 Fourth Ave., comes with a large education classroom, two individual patient rooms where patients can be seen one-on-one, and office space spread across the first and fourth floors.
According to Scripps, nearly 4 million people in California have either Type 1 or Type 2 diabetes. It is estimated that about 26,000 people in Chula Vista have diabetes.

In the older population the rates get higher, with 25 to 50 percent in people over 65 years old.
Athena Philis-Tsimikas, corporate vice president for the Scripps Whittier Diabetes Institute, said their Chula Vista patients would greatly benefit from such a center because of the increased risk of diabetes.

“The rates of diabetes in South San Diego are fairly high and significantly higher than the general population because there is a higher Latino population there,” she said. “The average rate of diabetes in the country is around 10 percent but in Chula Vista area it is closer to 14 percent.”

Classes offered at the center are for patients with diabetes or at risk of developing the disease. Classes cover a range of topics such as diet and nutrition, weight loss, exercise, blood sugar monitoring and control, and diabetes prevention.

The center was made possible by a $700,000 donation from former former Scripps board member Richard Woltman. He knows the seriousness of the disease since he has a son and grandson who both have Type 1 Diabetes.

Scripps Chula Vista had a previous diabetes center but the new Woltman Center is much larger with access to more resources, Philis-Tsimikaa said.

The new center will offer a team of nurses who work directly with physicians and high-risk patients admitted to Scripps Mercy Hospital Chula Vista to better manage their glucose levels during hospital stays; certified diabetes educators will provide nutrition and medication adjustment support to patients.

The center is also home to Scripps’ portion of a countywide Diabetes Prevention Program aimed at reducing the risk of developing the risk of Type 2 diabetes by 58 percent in the region. The program, part of a national effort led by the Center for Disease Control and Prevention, is funded through a special grant and provides free services in both Spanish and English.